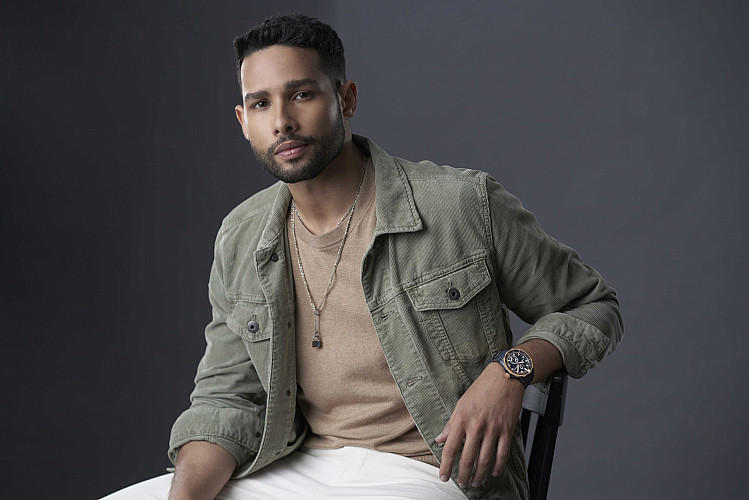 The “outsider” to Hindi cinema — who had earlier made small-screen appearances in the coming-of-age comedy series Life Sahi Hai (2016) and the sports-drama about cricket, Inside Edge (2017) — grabbed eyeballs with his natural turn in his film debut as the deep-thinking rapper MC Sher in Gully Boy, despite the presence of superstar Ranveer Singh. Siddhant Chaturvedi followed this success by ensuring he didn’t get typecast and was next seen as Kunal Singh, a con man (Bunty aur Babli 2, 2021), and the tragic lover Zain Oberoi (Gehraiyaan, 2022).

Earlier in May of this year, the understated heartthrob added yet another “role” to his growing repertoire by signing on as the Indian Brand Ambassador for Ulysse Nardin — the innovative Swiss horological house that extends the boundaries of watchmaking with timepieces that are inspired by the seas. Here, Chaturvedi talks about his muses and career choices….

You are a self-confessed film buff. Tell us more about who or what has inspired you.
I have always been an ardent fan of Aamir Khan — and I am a huge fan of cricket as well. So, when I saw Lagaan and, later on, watched the documentary on how it was made, I understood the true authenticity and aspirations of what it takes to make a film in Indian cinema. Lagaan was the story of an underdog, and it taught me how to overcome my limitations and rise above them.

What do you remember about the first time you set foot on a set?
The first time I set foot on a set was during the shoot of Inside Edge. Of course, I was extremely nervous, but as soon as they said, “Action”, it was as if something inside me switched. I thought I was terrible, but much to my surprise, they were very, very happy. They took two takes and the director said, “Moving on”.

It was my first role, and so I had prepared well in advance for it. I do not think I have ever really “acted”; I just behave like the character.

How did you react when Zoya Akhtar told you that you would be playing MC Sher? Would you say that this role established your credentials as an actor? And, as an “outsider” to the industry, how long did it take for you to adjust to life in the spotlight?
I remember it was 10 in the morning when I got Zoya’s call about being a part of Gully Boy and that I would be playing the role of MC Sher. I ran out to the dining room and told my parents. But I never thought Gully Boy would have the impact that it did.

It has established itself as a cult film, with everyone, everywhere wearing or saying the “apna time aayega [your time will come]” phrase. It has become a sort of anthem along with MC Sher’s character becoming iconic. I long to do more such roles.

I do not think you can plan to be a star; you just have to be true to your art. I still have not adjusted to life in the spotlight. I love to perform and be on stage, but when the lights turn off, I cut out all the noise and just find my comfort with my family.

Gully Boy, Gehraiyaan, Bunty aur Babli 2 and now Phone Bhoot — different movies, different roles. What draws you to a character and how do you prepare for each one? Do you believe in going with the director’s flow completely?
I am attracted to different genres and diverse characters because I do not want to repeat myself. I read the script multiple times so as to know the situations my character is going to be in and maintain a character diary.

I believe that film-making is like a marriage, where the director is the creator of a world and the actor brings in the character which fits into that world. It is a collaborative effort.

With Phone Bhoot, you make the pivot to horror-comedy. What did you learn about yourself as an actor while shooting for this film?
What I have learnt is that you are only as good as your co-actor[s], and I have been blessed with having partners in crime like Katrina [Kaif] and Ishaan [Khatter] in Phone Bhoot.

Today, with the extensive scrutiny in the public eye, it seems as if the off-screen “brand” of an actor — looks, social media presence, fashion sense and so on – has become as important as talent. How much significance do you give to this aspect and the choices that come with it?
It is actually the other way around. As actors, we need to focus on the craft. There is no brand as such — my motto is to be kind and do good work, and if that equals to my “brand” then so be it.

It is a philosophy, not a strategy.

How do you stay connected with your followers across digital platforms?
I come from the audience, and they are the ones who have made me. I am just myself, online and offline, so I do not have to try hard.

Have you always been fond of watches? As a “Ulysses” what excites you the most?
Yes, I have always been excited about watches. Ever since I was little, I saw my dad wear watches and how they immediately lifted an outfit. As a “Ulysses”, I appreciate the rich aesthetic sense of the brand. Every watch feels like it has been personalised for the specific wearer.

Would you call yourself a free spirit and an out-of-the-box thinker? And is that what drew you to Ulysse Nardin, a brand that has always celebrated doing the unusual?
Yes, of course. It is clearly visible with my film choices. I never liked sticking to norms or trends, and that is why the brand resonates with me.

Ulysse Nardin’s timepieces are inspired by the sea. Which of their diver’s watches are you drawn to?
I really like the Diver 44mm due to its vintage look, and the Marine Torpilleur 42mm in brown. I also would love to have a Freak X on my wrist soon. These are some of the timepieces which I would enjoy sporting, depending on my mood and look.

Two years ago, the brand launched the R-strap, made from recycled fishing nets. How does their commitment to sustainability — to the marine circular economy – resonate with you?
In today’s world especially, “sustainability” and “the environment” are words we cannot ignore. I try my best to cut down on my carbon footprint whenever I can. I also maintain and follow a vegetarian diet.

Tell us a little about the notes that you post on Instagram. Are you a romantic at heart?
I am old school at heart when it comes to love and romance. It is fading with time, but I want to hold on to it.

You have often talked about your hustle and ambition — what keeps you grounded now that you’ve “made it”?
I never think that I have made it. My ever-growing ambition is what keeps me going. My goal is to always be one step ahead when it comes to my own hustle, so I am never satisfied. The fun is in the chase.