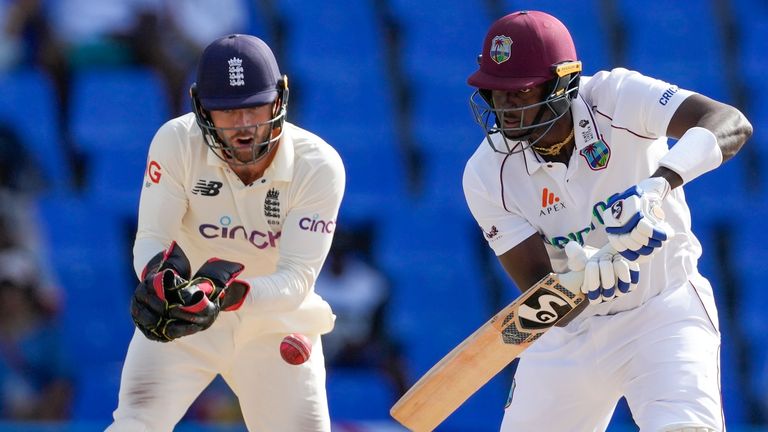 
Joe Root struck a century to go with 121 from Zak Crawley as England declared with a lead of 285 on the morning of the final day; West Indies were reduced to 67-4 soon after tea with Jack Leach taking three wickets; Jason Holder and Nkrumah Bonner batted out the match for a draw

An unbeaten fifth-wicket stand of 80 between Jason Holder and Nkrumah Bonner ensured the first Test between the West Indies and England petered out into a draw.

Zak Crawley’s 121 and another century from Joe Root helped propel England to a second-innings total of 349-6 declared on the morning of the final day in Antigua, with the West Indies 4-0 at lunch chasing 286 to win.

Kraigg Braithwaite and John Campbell continued that solid start in the afternoon session with an opening stand of 59, but the pair departed in quick succession and the home side were further reduced to 67-4 soon after tea thanks in no small part to three wickets from Jack Leach.

But Holder (37 not out) and Bonner (38 not out) stood their ground and saw the hosts through to the close on 147-4 to salvage the draw, with attention now quickly turning to the second Test in Barbados which starts on Wednesday.

Resuming on 219-1, England lost Crawley in the fifth over of the day for his second-highest score in Test cricket thanks to a fine piece of bowling from Jason Holder, sending down a fuller delivery which deceived the Kent man.

Root stood firm at the other end though, bringing up the 24th century of his Test career and third batting at No 3 to move into second above Kevin Pietersen on England’s all-time list before departing for 109 after becoming the first of Alzarri Joseph’s three victims.

Dan Lawrence left no one in any doubt as to the tourists’ intentions on day five either with a breezy 37 from 36 balls which included four fours and one six to help accelerate the run rate on what had been an otherwise slow-scoring pitch.

His cameo was brought to an end when he flicked one off the outside of his bat to Veerasammy Permaul at backwards point off Joseph’s bowling and that preceded a mini-collapse as Ben Stokes holed out to Sharmarh Brooks off Kemar Roach for a run-a-ball 13 and Ben Foakes was bowled by Joseph (3-78) for one.

Jonny Bairstow, centurion from the first innings, and Chris Woakes came together to see England through to a lead of 285 though before Root called them in to signal the declaration, ultimately giving them four overs to bowl at the West Indies before the lunch break.

With Mark Wood sidelined for the rest of the match with an elbow injury, Root opted for a mix of seam and spin with the new ball and it almost yielded a reward eight overs into the reply when Campbell’s ill-timed sweep off Jack Leach was put down by Crawley with the batter still on two.

Indeed, Campbell in particular had a couple of hairy moments on route to he and Kraigg Brathwaite putting on a half-century opening stand. However, the left-hander would eventually run out of luck.

It was Stokes who made the breakthrough in the 25th over, snaring Brathwaite (33) lbw and bringing to an end what had been a good opening partnership, followed the next over by Campbell (22) lofting one off Leach’s bowling straight to Overton at mid-on.

Leach’s second, coming as Brooks edged the left-armer to Crawley for just five, brought about the tea break and left the West Indies in disarray and effectively any slim hopes the hosts still harboured of winning this game.

It was now a case of having to dig in when play resumed, but a moment of madness from Jermaine Blackwood as he carelessly swiped at one from Leach which trapped him lbw, with the 30-year-old eventually returning to the pavilion after asking to review a decision he had no chance of overturning.

At the other end though, Holder was watchful and first-innings centurion Bonner took an incredibly patient approach as he took 34 balls to get off the mark.

England, meanwhile, had no luck with reviews after opting not to ask for another look when an lbw appeal which went against Leach (3-57) even though subsequent television replays indicated the ball would have gone on to hit the stumps and then ultra-edge showing Holder did not get an edge on one from the spinner when they were convinced it did.

And then when Overton had an appeal for lbw against Bonner while he was on 25 given, the review from the batsman saved him after showing an inside edge before striking his pads. Nevertheless, both teams will be taking plenty of positives into the second Test when it starts in four days’ time.