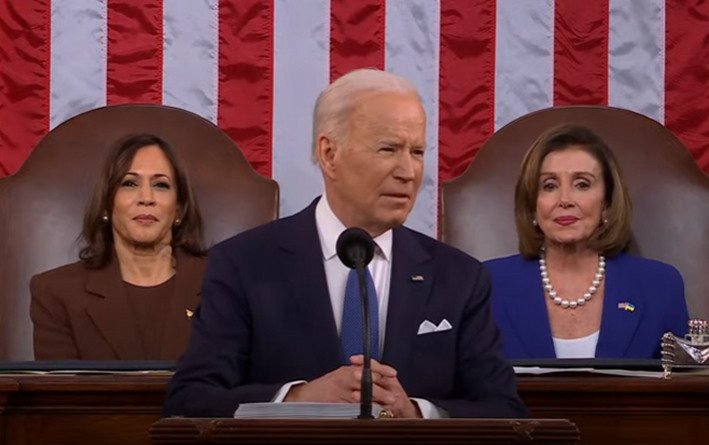 
Joe Biden’s SOTU speech was pretty much a bust.

Even over at CNN, where they front-loaded a poll with Democrats, the speech went over like a lead balloon.

Not a poll, obviously, of all Americans. That would not be possible here. This is a poll of people who watch the speech. And what’s important to note about that is that people who watch a President give a State of the Union tend to be more supportive of that President or in that president’s party. We see this with Democratic presidents and Republican presidents.

And so our survey tonight of Speech Watchers is about eleven points more Democratic as a body of people here that were pulled than the overall population in America. So just keep that in mind as we now show you what this instant reaction was. A poll of Speech Watchers tonight. 41% had a very positive reaction to the president’s speech, 29% somewhat positive, 29% negative. That 41%. When you compare it to last year’s speech that Joe Biden gave to a joint session of Congress, that’s about ten points lower on the very positive scale…

But look at this for the domestic issues that the White House is so keenly aware of in this midterm election year, that are potential problems for Biden. They still seem to be problems. 47% said he did enough on inflation, 46% said he did enough on violent crime, majorities for both inflation and violent crime, said he did not do enough. You enough. And again, I just want to remind you that is the majority of a speech watching audience that is more Democratic than the American populace overall.

Biden’s handling of 🇺🇦speech made you:
More confident 30%
Less confident 14%
No chg 56% pic.twitter.com/wn6V8CuOiF

This is the important detail:

Note: The CNN poll’s sample of State of the Union speech watchers was 11 points more Democratic than the American public.

If Biden can’t win in a CNN poll heavy with Democrats, he is in worse shape than people think.