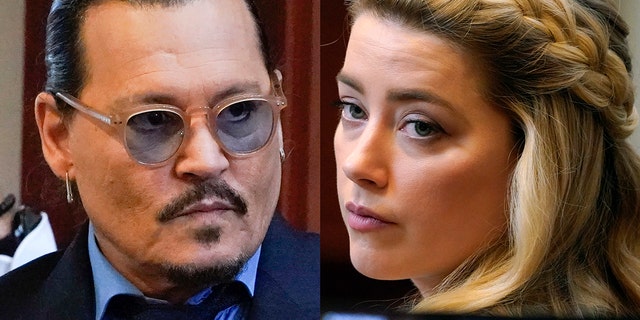 A jury on Wednesday found that Heard was liable for defamatory comments she made against Depp in a 2018 op-ed published in the Post that accused him of abusing her during their marriage. It was revealed during the trial that the ACLU had ghost-written the piece, which was published just days before the release of her film “Aquaman.”

The jury awarded Depp a total of $15 million and awarded Heard $2 million in compensatory damages in a counter defamation suit, though her libel claims were largely denied.

During an “emergency press conference,” Portnoy suggested the paper who originally published Heard’s defamatory op-ed shouldn’t be let off the hook.

“She posted this thing basically saying that Johnny Depp hit her, abused her, did all these horrible things, domestic violence, sexual deviancy, all this stuff up in the Washington Post. And what’s the Washington Post? They hold no responsibility in this?” Portnoy wondered in a video message.

This combination of two separate photos shows actors Johnny Depp, left, and Amber Heard in the courtroom for closing arguments at the Fairfax County Circuit Courthouse in Fairfax, Va., on Friday, May 27, 2022. Depp is suing Heard after she wrote an op-ed piece in The Washington Post in 2018 referring to herself as a “public figure representing domestic abuse.”
(AP Photos/Steve Helber, Pool)

“Amber Heard, seemingly scumbag, fair trial, got smoked. Everyone thought the case. The Washington Post- you can just do anything, you’re just saying anything, and they have no responsibility, no skin in the game, they cause all the damage to Johnny Depp? But no- ‘oh, she wants to say that he does this, that, the other thing we’ll just publish it. We’ll do no research on our own, no fact checking.’ It’s crazy,” Portnoy told his Twitter followers.

Portnoy grouped the Post with other outlets like The New York Times and Business Insider, which previously published sexual misconduct claims against him, as “left-wing nutbags” that “can print whatever they want.”

“And then when it’s total bulls— and a guy- his life has been destroyed, they’re like ‘Oops, we didn’t know. Not our fault. Whoever we talked to wasn’t totally truthful. We didn’t do any digging. We just trusted them at their word. And we printed it ruined it, Nope not our fault.’ F—ing crazy times. Maybe things are starting to change a little bit,” Portnoy said. “But if you ask me, the Washington Post should be held responsible as well. Like you gave her the platform, don’t you- like, don’t you have some responsibility to make sure what you publish isn’t s—?”

“I guess time will tell if this trend stays,” he added.

David Portnoy, founder of Barstool Sports, speaks during a radio broadcast prior to Super Bowl LIV on January 30, 2020 in Miami Beach, Florida. The San Francisco 49ers will face the Kansas City Chiefs in the 54th playing of the Super Bowl, Sunday February 2nd.
(Photo by Cliff Hawkins/Getty Images)

During the trial, both Depp and Heard were bent on mutual destruction, exposing the tawdry details of their failed marriage in a tit-for-tat that has left their reputations in tatters.

The protracted court battle kicked off in 2019 after Depp sued Heard in Fairfax County Circuit Court in Virginia over a 2018 op-ed she wrote in the Washington Post identifying herself as a “public figure representing domestic abuse.”

She did not refer to Depp by name, but his lawyers have argued that the piece falsely portrayed Heard as a domestic violence victim and ruined his life.

The warring exes began their battle two years earlier on May 27, 2016 – a central date in their saga.

ELON MUSK WEIGHS IN ON DEPP-HEARD TRIAL: ‘I HOPE THEY BOTH MOVE ON’

That’s when Heard went to a Los Angeles courthouse to obtain a restraining order against Depp after he allegedly bashed her in the face with a cellphone.

She exited the courthouse flanked by her publicist, and with a large bruise under her right eye, as a throng of photographers snapped her picture.

Depp’s team argued that she painted on the bruise and tipped off the press.

The photos and abuse allegations went viral, garnering international headlines, and set off a vicious public quarrel that has persisted for six years – twice as long as their relationship.

Depp’s attorney, Camille Vasquez, argued during closing statements that Depp was the sole victim in their doomed romance.

“There is an abuser in this courtroom, and it is not Mr. Depp,” Vasquez told jurors Friday, noting that it was the six-year anniversary to the day that Heard obtained the restraining order. “Ms. Heard is in fact the abuser and Mr. Depp the abused.”

Heard’s lawyer, Ben Rottenborn, said in closing statements that Depp’s lawsuit against the “Rum Diary” actress is a continuation of a relentless smear campaign her ex-husband launched against her after she filed for divorce.

“In Mr. Depp’s world, you don’t leave Mr. Depp, and if you do, he will start a campaign of global humiliation against you,” he said, adding that a verdict in favor of the “Pirates of the Caribbean” star would have a chilling effect on First Amendment protections – especially for victims of domestic abuse.

Previous articleItaly 0-3 Argentina: Lionel Messi’s side win the Finalissima at Wembley after goals from Lautaro Martinez, Angel Di Maria and Paulo Dybala
Next articleBrendon McCullum says Test cricket in ‘big trouble’ if England are not ‘strong and ‘watchable’
- Advertisement -