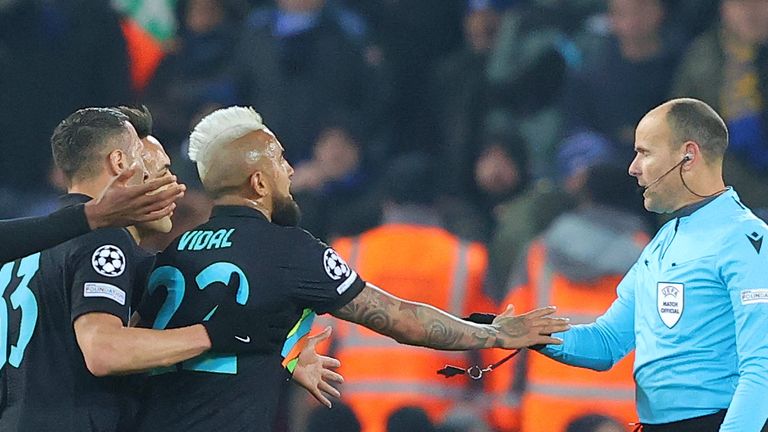 
Jurgen Klopp said Alexis Sanchez was lucky to be on the pitch when he received his second-half red card as Liverpool saw off Inter to progress in the Champions League.

Sanchez was shown a second yellow card by referee Mateu Lahoz for catching Fabinho with his follow-through moments after Lautaro Martinez had fired Inter back into the last-16 tie with a thunderbolt effort to reduce the Serie A side’s deficit to 2-1 on aggregate at Anfield.

The Chilean was incensed by the decision and refused to leave the field for several moments and Inter coach Massimiliano Farris was sent off during the ensuing aggravation, but Klopp said Sanchez was lucky to be on the pitch at all by the time of his dismissal – having earlier only seen yellow for a knee-high challenge on Thiago Alcantara.

He said: “I don’t understand why we have to discuss the red card. If you can win the ball only, if you endanger an opponent when you do it, then you don’t win the ball. If Fabinho goes in with the same intention, with the leg out, then both players get injured.

“I think he was lucky he hadn’t got a red card in the first half, going in so high on Thiago onto his knee. Passion is good, absolutely good, but if it leads to these kind of things then it doesn’t help.”

The defeat ended Liverpool’s run of 12 consecutive wins and although Klopp admitted he was unhappy to see the streak come to an end, he was in philosophical mood as he mused on where the Reds can afford to be beaten.

In spite of the result, the German felt the scoreline could easily have been different had his side taken a proportion of their clear-cut chances, with Joel Matip denied by the woodwork and Mo Salah also hitting both posts.

“The art of football is to lose the right games – I still hate it, but if there was any game to lose, it was tonight because the main target is to go through and we’ve done that,” he said.

“It’s not that I’m over the moon, I’m happy we went through because when we saw the draw, we thought it was a tough one, and we deserved it over the two legs.

“We had some difficulties, one of those is the quality of the opponent, they are a really good team. But we still had our chances, and didn’t score. I didn’t like our counter-press, when we lost the ball we had to chase the situation and that was not exactly how I wanted it.

“But in the end, you have to respect the quality of the opponent. And had we used our chances we still could have won the game.”

Salah: Maybe we were overconfident

Mo Salah suggested Liverpool may have been complacent going into the second leg of the last-16 tie, having secured a 2-0 lead in the first leg at the San Siro, and said his side would learn from their first defeat since December to bounce back in the title race.

He told BT Sport: “We lost a game that has maybe given us a bit more of a push. Maybe in the back of our mind, we were overconfident, it’s a good game to take that in, learn from and carry on.

“It’s always important to win, but sometimes like tonight, we hit the post three times, missed a lot of chances, but it can happen. But it’s not in the league, and we have qualified.

“We struggled from the beginning, but the most important thing is that we qualified. I hit the post twice, but it’s one of those things. Maybe in the next game, I can score three goals.

“I don’t mind so much with the team qualifying, and that’s the most important thing.”

Inter Milan boss Simone Inzaghi repeatedly ignored questions about the legitimacy of Sanchez’s red card and instead focused on what he felt was an unjust first-leg defeat at the San Siro which led to his side’s elimination from this season’s Champions League.

He said: “We were very bitter about what happened at the San Siro; over the two games we were the equals of a really strong team in Liverpool.

“We knocked them back when we scored our goal, but then Sanchez got sent off and we saw what happened.

“We’ve got to this stage for the first time in about 11 years, we played against possibly the best team in Europe and were their equals. We put in two very good performances, and sometimes it just takes a single episode to take the course of a game.

“This evening we played well, in the second half we began to get the upper hand, scored a goal and then Sanchez was sent off. I’m more bitter about what happened in the San Siro than tonight.

“We feel upset about having a player sent off just when we were getting the upper hand in the game.”