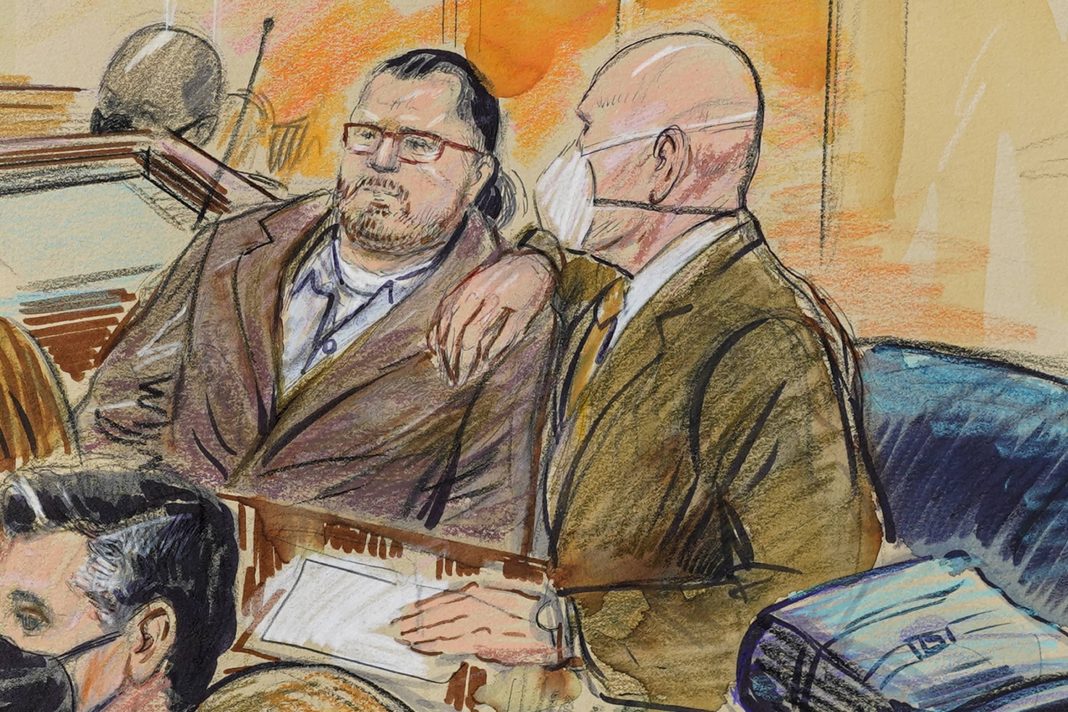 This artist sketch depicts Guy Wesley Reffitt, joined by his lawyer William Welch, right, in Federal Court, in Washington, Monday, Feb. 28, 2022. Reffitt, a Texas man charged with storming the U.S. Capitol with a holstered handgun on his waist, is the first Jan. 6 defendant to go on trial.

A federal jury on Tuesday convicted the first person to stand trial on charges related to the Jan. 6, 2021, storming of the U.S. Capitol by a mob of supporters of then-President Donald Trump.

The defendant, Texas resident Guy Reffitt, was convicted of all five charges he faced in U.S. District Court in Washington, D.C.

Jurors had deliberated for less than four hours before delivering their guilty verdicts on the two counts of civil disorder, and a single count each of obstruction of an official proceeding, entering restricted grounds with a firearm, and obstruction of justice.

“I don’t care if [House Speaker Nancy] Pelosi’s head is hitting every stair as I drag her by her ankles, she is coming out,” Reffitt, 49, said in statements introduced as evidence by prosecutors at trial, where the defendant’s own son testified against him.

Reffitt was one of the thousands of Trump supporters who invaded the Capitol complex on Jan. 6, 2021, after weeks of false claims by Trump that he had actually won the 2020 presidential election, and that Democratic Joe Biden‘s Electoral College victory was the result of widespread ballot fraud.

Trump repeated those bogus allegations at a rally that day outside the White House, where he urged a crowd to march to the Capitol and fight against the confirmation of Biden’s win by a joint session of Congress, which was then ongoing.

The subsequent riot at the Capitol caused lawmakers and then-Vice President Mike Pence to flee both chambers of Congress.

Reffitt’s own son Jackson Reffitt, then 18, told the FBI about his father’s role in the riot within days, even after Guy Reffitt warned Jackson and his 16-year-old sister that they would be “traitors” if they reported his actions, and that “traitors get shot,” according to the son’s testimony at trial.

A friend of Guy Reffitt’s, Rocky Hardie, testified that the two men had traveled together to Washington in Reffitt’s car, which was carrying rifles, handguns and ammunition.

Hardie, who had belonged to the right-wing group Texas Three Percenters with Reffitt, said Reffitt was armed with a handgun and also was carrying zip ties when he tried to enter the Capitol building.

Reffitt, who was one of more than 750 people charged in the attack, is scheduled to be sentenced on June 8 by Judge Dabney Friedrich.

Before Reffitt went to trial, more than 200 other Capitol riot defendants had pleaded guilty and received their sentence in the same courthouse.