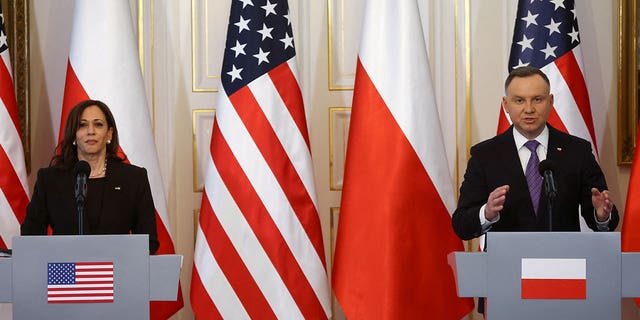 Vice President Kamala Harris was ridiculed for appearing as a deer in headlights in response to a question on how the United States could assist in the plight of Ukrainian refugees during the Russian military invasion, even appearing to look to Polish President Andrzej Duda for help.

A reporter pressed Harris on the Ukrainian refugee crisis during her joint press conference with Duda in Poland Thursday, saying that according to a colleague’s reporting, Poland would not be equipped to handle an influx of Ukrainian refugees. Her colleague said that, in its current state, the refugee system in Poland will collapse because it’s an improvised system that can work for “maybe two weeks, but not indefinitely.”

“I’m wondering what the United States is going to do more specifically to set up a permanent infrastructure and, relatedly, is the United States willing to make a special allocation for Ukrainian refugees?” the reporter asked Harris. The journalist then asked Duda if he had specifically asked the U.S. to accept more refugees.

Harris did not appear eager to answer the inquiry, turning expectantly toward Doda and saying, “A friend in need is a friend indeed,” before laughing for several seconds. Duda eventually capitulated and answered his question first, saying he had asked Harris to help speed the process of Ukrainian refugees obtaining U.S. visas in order to stay with family in the States.

Harris later said she understood the “unprecedented” situation presented to the Polish government, but did not say how many refugees the U.S. would be willing to take.

Viewers were not impressed by the vice president’s response. Some said they were “embarrassed” by the display, while others hit her for laughing at such a somber time for the Ukrainian people. At least 1.5 million people have fled Ukraine since the start of the Russian invasion, the United Nations has estimated.

CBS’ GAYLE KING CONTRASTS TREATMENT OF UKRAINIAN REFUGEES TO MIGRANTS AT US BORDER: ‘NOT TREATED THIS WELL’

“A maternity hospital was just bombed,” Daily Mail columnist Meghan McCain noted, referring to the Russian military’s shelling of a maternity and children’s hospital in Mariupol, Ukraine on Wednesday. Harris did express outrage at the bombing.

This photo taken at the Ukraine-Poland border shows people carrying whatever they could grab from their homes.
(Francesco Malavolta)

President Biden appointed Harris as his so-called border czar last year to help get a handle on the tumult there. She was slammed repeatedly for taking so long to make a trip to the border, only doing so at the near 100-day mark of her assignment. Asked by NBC’s Lester Holt why it had taken months to make the trip, Harris again nervously laughed.

“And I haven’t been to Europe. I mean, I don’t understand the point you are making,” Harris replied, chuckling.

CNN’s Chris Cillizza was mocked Wednesday for asking if Harris’s trip to Poland would be her “moment.”

“This sort of tricky international diplomacy at a moment of crisis for Europe and the world is when (and how) leaders are made. If Harris can find a way through this fraught period with Poland, as well as the ongoing push by Ukraine for a no-fly zone, it would amount to a major win — not just for the Biden administration, but for Harris in particular,” Cillizza wrote.

Previous articleHuddersfield Town defying the odds in the Championship with unbeaten run: Leigh Bromby on the club’s renaissance
Next articleWhy working with the healthcare system is key to reforming rural health
- Advertisement -