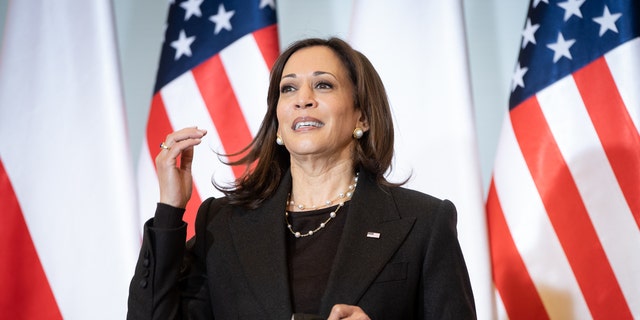 Vice President Kamala Harris rallied Democrats at their winter meeting Saturday and said the big task of the midterms is to remind voters that the Biden-Harris administration largely delivered on their campaign promises.

“Our task is to show people that, in many ways, they got what they ordered,” Harris told the Democratic National Committee (DNC) meeting.

Fresh off of her trip from Europe to address the Russia-Ukraine war, Harris said Russian President Vladimir Putin’s invasion of Ukraine threatens democracies well beyond Ukraine.

DEMOCRATS SEEK TO ‘SELL’ ACCOMPLISHMENTS AHEAD OF TOUGH MIDTERMS

“The ocean that separates us will not leave us untouched by this aggression,” Harris said.

She said when she was meeting what allies in Europe she said their greatest strength they share is unity, in standing together in defense of democracy.

She affirmed the U.S. commitment to Ukraine as it fends off a brutal Russian invasion.

“The United States stands firmly with the Ukrainian people in defense of the NATO alliance,” Harris said.

Harris’s speech to the Democratic National Committee (DNC) in Washington D.C. comes as faithful gear up for what is expected to be a tough midterm election season. It’s the first time the hundreds of DNC members have gathered for an in-person event since 2019 due to the coronavirus pandemic.

Biden addressed the roughly 415 members of the DNC Thursday night where he told them to be proud of what Democrats have accomplished since his presidency and to do a better job of selling the record to the American public.

“We have a record — a record to be proud of; an agenda that addresses the biggest concerns here in America, in people’s lives; the message that resonates,” Biden told the gathering at the Washington Hilton Hotel Thursday.  “Now what we have to do is we have to sell it with confidence, clarity, conviction, and repetition.”

While key parts of the Biden-Harris agenda failed in Congress, namely the Build Back Better social spending agenda and voting rights reforms – Harris said that Democrats still managed to do a lot.  She touted the American Rescue Plan, job gains, school and businesses reopening from the pandemic and the bipartisan infrastructure act that she said will create more good-paying union jobs.

Harris praised the Democrats who voted in record numbers during the coronavirus pandemic and said now it is the time to remind them of those accomplishments.

“A lot of what they demanded they got and so let’s get out there as we do and remind them … because we know that they will show up again,” Harris said.

Republicans, however, seek to blame Biden and Harris for inflation and high gas prices that have hurt American families.

“Kamala Harris is returning to record gas prices, historic inflation, runaway crime, an open border, and a country moving in the wrong direction,” Republican National Committee spokeswoman Emma Vaughn said in a statement. “Biden and Harris have lost the trust of the American people —  their agenda is destroying wallets, pitting Americans against each other, and weakening our standing on the world stage.”

Harris just returned to Washington early Saturday morning after traveling to Poland and Romania to demonstrate unity among NATO allies, show support for Ukraine and condemn Russia’s unjustified war against the Ukrainian people.

Poland’s Prime Minister Mateusz Morawiecki, right, and US Vice President Kamala Harris pose for a photo as she arrives for a meeting, in Warsaw, Poland, Thursday, March 10, 2022.
(Saul Loeb/Pool Photo via AP)

Harris on Friday said the U.S. will take more action to ensure Russian President Vladimir Putin faces “serious consequence” for his “atrocious and outrageous conduct on behalf of the Russian people.”

During a joint press conference in Bucharest, Romania, Friday alongside Romanian President Klaus Iohannis, Harris said it is “painful” to watch what is happening to Ukrainians.”

“We are clear that any intentional attack or targeting of civilians is a war crime, period,” Harris said.

At the conclusion of her European trip, a White House official said Harris “will continue her work engaging with European and Eastern Flank leaders in a series of phone calls early next week. She will be discussing her trip, and next steps on our collective response to Russia’s invasion of Ukraine.”