Lapse in GI Benefits Highlights a Rocky Start for U. of Arizona’s Online Campus 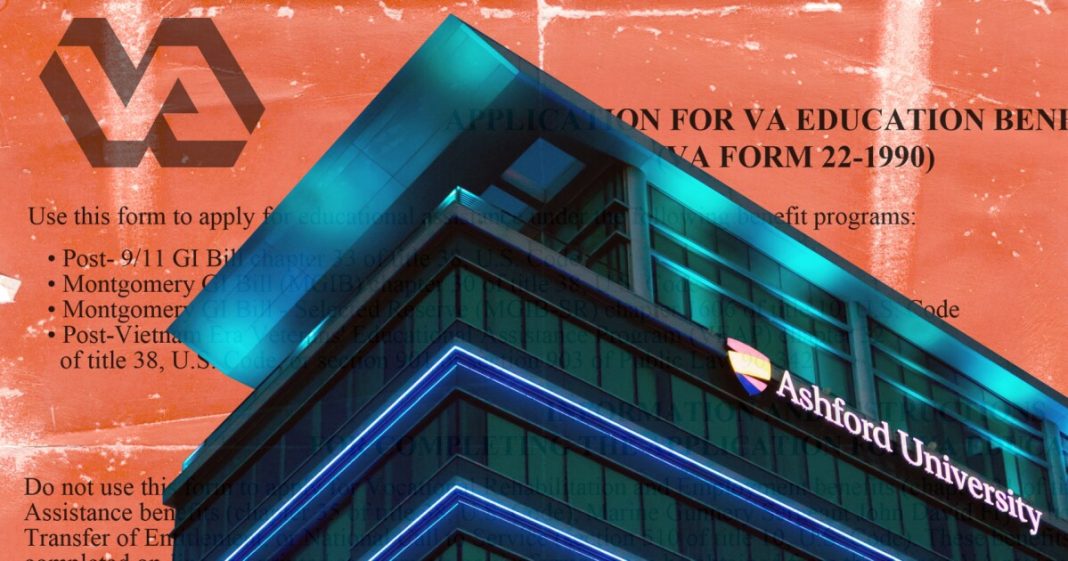 
The University of Arizona Global Campus is facing an uncertain future amid allegations of past predatory recruiting practices and a sudden loss of eligibility for federal GI Bill benefits.

The online college, formerly known as Ashford University, partnered with the University of Arizona in 2020. The state university gained an additional revenue stream and a wider online footprint. But it did so by teaming up with a for-profit college that had a checkered past.

Now, the new, jointly operated nonprofit university’s planned relocation to Arizona has hit a snag as officials in California, where the institution was previously based, canceled its GI Bill eligibility before Arizona officials could approve it.

That gap in approvals has left the university and its military-veteran students scrambling. For now, the college is providing them with grant funding to cover any shortfalls, but that won’t replace veteran student-housing stipends, which are now at risk of vanishing unless the problem is fixed quickly.

A VA spokesperson said the university’s 3,000 veteran students “will receive benefits through the end of their respective term.” The university calls it a “temporary lapse in VA funding.”

Throughout the relocation process, Paul Pastorek, president of the global campus, said it “has had one stated goal — avoid any disruption of benefits for our eligible students and their dependents.”

“Since the end of 2021, we have followed the rules and instructions we were given and worked continuously to meet all requests and obligations on time,” he said in a statement. “We will do everything in our power to keep students in the classroom as we await the formal approval in Arizona.”

Arizona’s veterans’ agency did not immediately respond to a request for comment.

Some consumer-advocacy groups want the university cut off permanently from all types of federal funds, and they point to a recent California court ruling as one of the key reasons.

A month ago, a California judge fined the university’s former owner, Zovio, more than $22 million as punishment for a wide array of unethical business practices.

The court found that the university had “violated the law by giving students false or misleading information about career outcomes, cost and financial aid, pace of degree programs, and transfer credits, in order to entice them to enroll.”

In a statement, Zovio told The Chronicle that there were positives in the judge’s ruling. “While we are pleased the court acknowledged Zovio’s new role in providing critical education-technology services to UAGC and our commitment to compliance, we are disappointed by the judge’s decision and are evaluating all of our options including appeal,” the company said.

The judge’s hefty fine may have upended Zovio’s near-term financial outlook, as the publicly traded company recently canceled a conference call with investors.

In 2017, The Chronicle highlighted how Zovio, then operating under the name Bridgepoint Education, had deep political connections in Arizona, and had used those connections to circumvent GI Bill eligibility requirements.

The Veterans Education Success advocacy group on Tuesday sent a letter to the Defense Department, asking it to follow the VA’s lead and end the university’s eligibility for student aid — in this case the department’s tuition-assistance program.

“For decades, veterans have been targeted with incredibly ugly, deceptive recruiting and fraud to steal their GI Bill, and nobody’s done anything about it,” the group’s president, Carrie Wofford, told The Chronicle. “The government has each time caved to corporate interests. This time, with a court finding of fraud, this company has no business getting federal funds.”

Also Tuesday, Wofford’s group joined with nearly a dozen others, including the American Federation of Teachers and the Center for Responsible Lending, to ask the Education Department to cut off the University of Arizona Global Campus from Pell Grants and federal student loans.

“The Higher Education Act requires the Department to act now to protect students and taxpayers’ dollars — not years into the future,” the groups wrote.