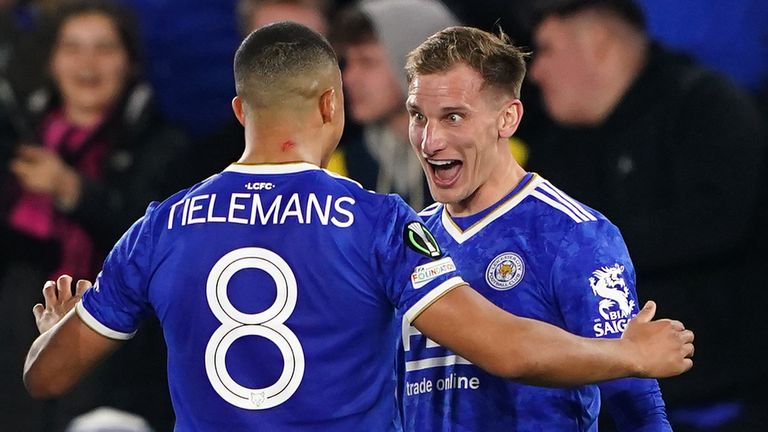 
Leicester took control of their Europa Conference League last-16 tie with Rennes as Marc Albrighton and Kelechi Iheanacho earned them a 2-0 first-leg win.

A nervy start for Brendan Rodgers’ side was blown out of the water when Albrighton smashed home Harvey Barnes’ cutback from the edge of the box on the half-hour mark, following Caglar Soyuncu’s defence-splitting pass over the Rennes defence.

And while the Foxes were relatively untroubled by their French opponents in their first-leg, Iheanacho’s curling effort in stoppage time feels like a big moment in their season – with Rodgers’ men picking up a fourth straight victory in all competitions, plus a first European clean sheet of the season.

Leicester were without Jamie Vardy for the King Power Stadium leg, with the Foxes talisman looking a doubt for this weekend’s Super Sunday clash at Arsenal, with Patson Daka starting in the former England international’s place and James Maddison on the bench.

But Daka struggled to get involved in the early exchanges, with Rennes starting the better in the opening 20 minutes. Striker Gaeten Laborde, who has 16 goals this season, went closest early on as he met Adrien Truffert’s cross inside the Leicester penalty area, but could only fire wide of Kasper Schmeichel’s post.

Brendan Rodgers made two changes to the side who beat Leeds at the weekend. Jamie Vardy is injured so Patson Daka replaced him at centre-forward.

The other switch was at right-back as James Justin came in for Hamza Choudhury, for the English defender’s first European appearance since December 2020.

Leicester’s early nerves showed once again as a couple of sloppy moments in possession led to more Rennes chances. First, Martin Terrier saw a shot well-blocked by Daniel Amartey, before winger Benjamin Bourigeaud fired wide from inside the box.

But Leicester took control after the opening quarter of the game. As possession and pressure grew, Soyuncu played a glorious pass over the right-hand side of the Rennes backline towards Barnes. An excellent takedown from the Leicester No 7 allowed him to venture into the box, before teeing up Albrighton who smashed the ball into the top corner from the edge of the box.

Rennes improved after the half-time break and saw two separate shouts for a penalty waved away in their opening move of the second period.

Both James Justin and Soyuncu were accused of using their hands to defend a free-kick, while Rennes defender Nayef Aguerd could only find Schmeichel after the two ricochets.

Leicester goalkeeper Schmeichel was twice called into action in quick succession, pushing away Terrier’s effort with his feet before doing the same to deny Laborde from inside the box. Flavien Tait then curled wide of the Dane’s near post as Rennes efforts to prove the Foxes goal fell flat.

And there was enough time for Iheanacho to curl home a second on the break to put daylight between them and their opponents.

Rodgers: Job not done yet

While Leicester and Rodgers will recognise this is only half-time in their European tie, a fourth straight win in all competitions has certainly eased the pressure on their manager.

A winless start to 2022 created questions about whether Rodgers had taken the Foxes as far as they could go under him, but the Foxes are finally back on track at both ends of the pitch.

Thursday night’s clash was not the end-to-end spectacle that this week has spoiled football audiences with, but Rodgers did use Wednesday’s thriller between Real Madrid and PSG as a warning to his side after this first-leg triumph.

“I said to the boys before the game, no matter what happens today, it’s only half-time,” Rodgers said. “I even mentioned the game last night, PSG vs Real Madrid. For me, two-nil up is a scoreline of endurance.

“You have to stay focused and endure and suffer a bit. We know we have the quality to go win there (in the second-leg) as well.”

That quality comes in the form of Harvey Barnes, who – like his team – is starting to get back to his best. Goals in both legs in the previous round against Randers and three goal contributions in his last three Premier League outings was backed up by another set-up for Albrighton’s opener in this clash.

“Harvey was a real threat for us and he created the goal for Marc and it was a fantastic finish,” Rodgers added. Barnes is coming up to the one-year anniversary of his season-ending injury last term. Now it’s time to see whether this purple patch has got him back in the England reckoning.

This is now three straight clean sheets for Rodgers’ Leicester, who failed to register a single shut-out in the calendar year before this run of form.

The Foxes will have greater tests to their backline in the coming weeks – most notably against Arsenal and Manchester United who Leicester must visit before the end of the month – but this team is starting to show it can do the hard yards off the ball.

“We’re very strong now defensively,” said Iheanacho. “We’ve got clean sheets now. And we need to keep that going. Coming in and securing the 1-0 at half time – we’re happy doing that and we’ve got that security now.”

Rodgers added: “Everyone said before, [Rennes] was a team who had scored a goal of goals. PSG have 56 [in Ligue 1] and they have 53. So to limit them to one shot on target is great.

“We know they’re a good side. We had to work very hard and we scored two fantastic goals and enjoyed our game.”

What’s next for Leicester?

Leicester travel to Arsenal in the Premier League on Super Sunday, live on Sky Sports from 4pm; kick-off 4.30pm. The second leg of their Europa League last-16 against Rennes is next Thursday, March 17 at Roazhon Park.