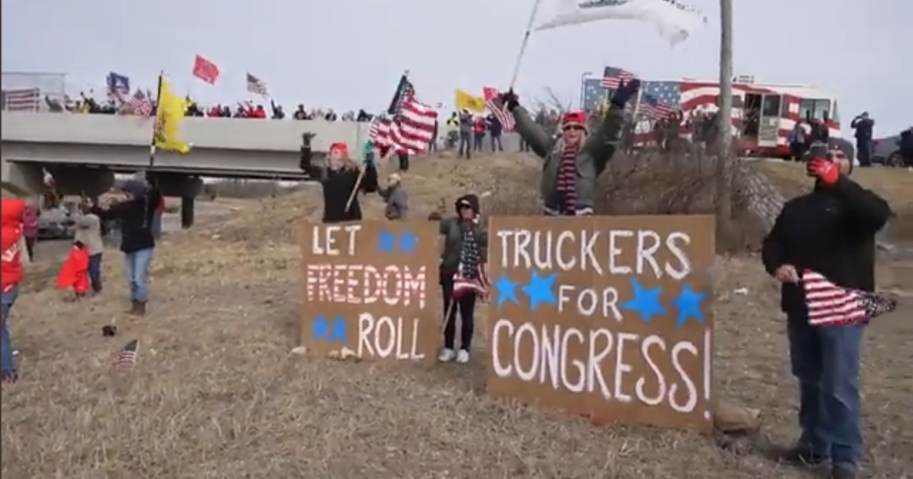 
Thousands of American Truckers from across the country will reach the DC Swamp tomorrow morning for a massive protest to pressure Biden to end the national state of emergency that was declared at the start of the pandemic, along with all the other public health mandates that have been used to restrict Americans’ constitutional rights.

They’re so close, DC can practically hear the honking already.

On Friday, the largest group, ‘The People’s Convoy,’ merged with another massive group when it arrived at its final rest stop in Hagerstown, Maryland, which is just 75 miles (90 minutes) away from the nation’s capital.

The convoy is now well over 10,000 vehicles long, including thousands of trucks. There are so many participants in the caravan that it has taken over three hours for them to get off the highway, and there is still no end in sight.

Take a look at the absolutely crazy scene at the Hagerstown Speedway, which is where The People’s Convoy will be making its headquarters throughout the upcoming protests.

HAPPENING NOW: The Peoples Convoy has arrived in Hagerstown, MD to a reception of thousands of locals.

The convoy will be staying at the Hagerstown Speedway location, and after 2 hours the convoy is still exiting highway.

Tomorrow, we depart to D.C.

Updates from over an hour later show that the line of cars still stretches out into the night for miles.

Truckers are still trying to get into the Hagerstown Speedway for the trucker convoy. The line down route 40 stretches more than 2 miles. Some of these people are not participating, but most of the cars and trucks in line are parked on the shoulder, waiting to get in. (@wusa9) pic.twitter.com/HgudHCP9G1

Trucks are still pouring in Hagerstown Speedway MD. Traffic is backed up for miles and miles to get it. The parking lots at the speedway will soon be at capacity.

The massive convoy was met by another large group of truckers when they arrived in Hagerstown. Hundreds of vehicles waited for the main group to arrive for several hours, preparing the area for their arrival.

Once again, thousands of supporters also showed up to greet the truckers, bringing food, drinks, and supplies along with them to donate.

Tomorrow is going to be, as Trump would put it, YUUUUUUGE.

#HappeningNow Staging area being set up for US trucker convoy at Hagerstown MD Speedway. The west coast convoy will arrive this evening. #FreedomConvoy2022 #TruckersConvoy #PeoplesConvoy pic.twitter.com/lzZ1F9cuY3

Tonight, the #PeoplesConvoy shall rest in Hagerstown, Maryland before they take to Washington DC. This weekend, they will show the Establishment that Freedom won’t be stopped! pic.twitter.com/QoLZBr4o43

After one last night of rest, the truckers will depart for Washington DC in the morning to kick off the fireworks.

On Saturday, the over 70-mile-long convoy will head straight to the DC Beltway in order to shut down traffic surrounding the capital. The Beltway loop itself is just 63 miles long, so they should be able to pull off a significant disruption. Later in the day, there will also be a convoy rally somewhere “only two miles from the Beltway” where some GOP lawmakers are expected to join and show their support, according to the Washington Post.

Tomorrow’s demonstrations will be the first of many over the coming days. The convoy has been well-stocked on its way across the US, so they are in for the long haul.

However, they can always use more support, to donate to the movement directly, ensuring these brave men and women can keep on truckin’ for freedom, you can do so here.

Get ready for an interesting weekend. HONK HONK!