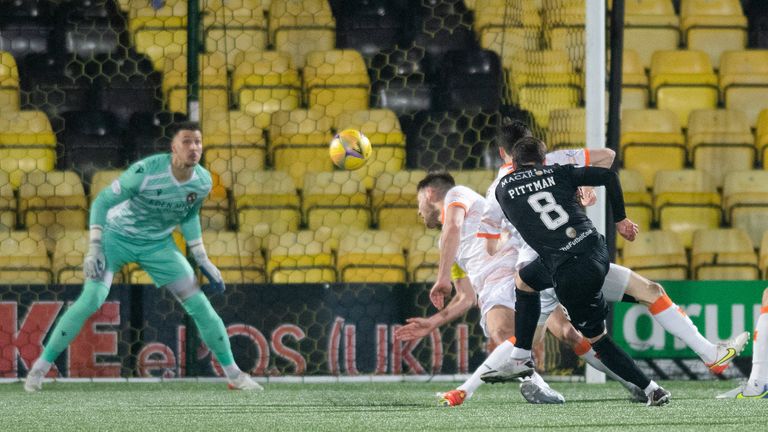 
Livingston climbed up to fourth in the Scottish Premiership after a late Ryan Edwards own goal handed the Lions a deserved victory over Dundee United.

Edwards knocked a Nicky Devlin cross into his own net in the 83rd minute as the home side came from behind to take the three points.

Liam Smith gave the visitors the lead after only two minutes before Scott Pittman levelled in the 23rd minute.

Livingston created chance after chance either side of the break and finally got their reward late on.

In a high-octane start to the game the visitors stormed ahead after only two minutes through Smith.

Tony Watt delivered a low pass across the area and Smith reacted the quickest to stab the ball home to net his first goal of the season.

That was to be Watt’s last meaningful involvement as the striker hobbled off after only 13 minutes, with Nicky Clarke coming on.

Livingston levelled in the 23rd minute with an excellent strike from Pittman. Bruce Anderson opted not to shoot inside the area and cut the ball back for his team-mate.

Pittman controlled the heavy pass before firing a half-volley past Benjamin Siegrist from 12 yards.

Livingston grew in confidence after scoring and should have had another when Ayo Obileye headed Alan Forrest’s corner just over.

At the other end Ilmari Niskanen directed a tame header at Max Stryjek.

But it was the Lions who ended the half the stronger as they created countless chances.

Forrest curled a low effort just beyond the far post from the 18-yard line before Devlin struck a tame shot at Siegrist.

Anderson then fired an effort over as the home side piled on the pressure.

Livingston kept coming at the start of the second half and went close again through Pittman.

Anderson fired in a low cross and the outstretched Pittman got a touch from inside the six-yard box but Siegrist made the block.

United manager Tam Courts made a double change in a bid to help his team get a foothold in the game, with Chris Mochrie and Scott McMann coming on.

United did at least create a rare chance when Clark latched on to Calum Butcher’s pass inside the area but with the angle against him, he crashed his effort into the side-netting.

Forrest was then twice denied by Siegrist as the home side continued to press for a winner.

Livingston got the elusive goal thanks to Edwards, who turned Devlin’s cross past his own goalkeeper at the near post in the 83rd minute.

Livingston will return to Scottish Premiership action on Sunday at 12pm as they face Celtic, live on Sky Sports.

Dundee United next take on Hearts in the Scottish Premiership on Saturday at 3pm.