Mask mandates go away in schools, but parent worries persist 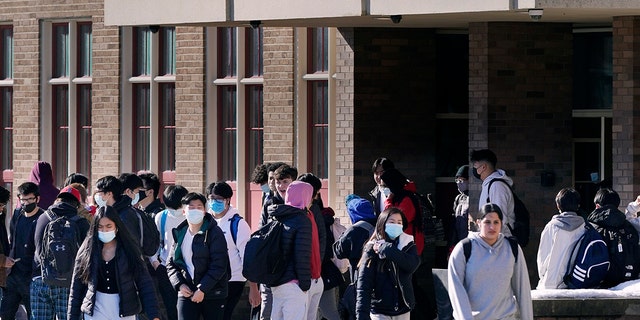 Major school districts around the country are allowing students into classrooms without masks for the first time in nearly two years, eliminating rules that stirred up intense fights among educators, school boards, and parents throughout the pandemic.

New York City became the latest school district to do away with its mask requirement Monday and Philadelphia is poised to lift its mandate Wednesday, joining big cities such as Houston and Dallas and a number of states that made similar moves in the last week. Chicago schools will end their mask mandate next Monday.

Parents, teachers, and principals face a complicated balancing act in navigating the new rules. Some families are thrilled that their children no longer have to wear masks, while others say they’re still tentative and urging their kids to keep wearing face coverings for now. Teachers and principals are caught in the middle.

HOUSE REPUBLICANS CALL FOR END TO VACCINE MANDATES FOR FOREIGN TRUCKERS, AGRICULTURAL WORKERS AT THE BORDER

In Anchorage, Alaska, School Superintendent Deena Bishop says lifting the mandate in the city’s nearly 100 public schools last week was a relief after months of acrimony even though there were some bumpy patches.

Bishop says she has been made aware of a handful of comments teachers inadvertently made that “didn’t sit well” with students and their parents, such as a teacher singling out a young child whose parents decided to keep them wearing a mask and another who had made a student feel guilty about their decision not to wear one.

She said the instances served as “teachable moments” to remind staff that “a choice is a choice and that we need to honor that home’s choice.”

“There was a lot of angst, a lot of battles in the city over wearing masks, not wearing masks,” Bishop said. “So I’m glad that we’ve taken that fight away. All that has just subsided, and now we can go back to focus on learning.”

Falling infection rates and new federal health guidance are leading most of the remaining states with statewide school mask requirements to drop the mandates. The Centers for Disease Control and Prevention recently issued new guidelines saying most Americans live in places where healthy people, including students, can safely take a break from wearing masks.

But those hesitant about ending school mask mandates often point to low childhood vaccination rates among American children. Only about a quarter of children ages 5 to 11 have been fully vaccinated against the coronavirus, and about 58% of children ages 12 to 17 are inoculated, the CDC says.

In many instances, the ultimate decisions are being made at the local school district level.

Children and their caregivers arrive for school in New York, Monday, March 7, 2022. New York City passed a COVID-19 milestone on Monday as masks became optional in city schools and restaurants and other businesses could stop asking patrons for proof of vaccination. (AP Photo/Seth Wenig)

Officials many large cities, such as Boston, Los Angeles, and Washington, D.C., have said they’ll keep mask rules for now, either until vaccination rates improve among their students, or they can work out agreements with teachers unions, which have been among those most vocal about keeping the mandates in place.

After Chicago schools announced Monday that masks will no longer be required as of March 14, the city’s teachers union vowed to take officials to court, saying the move will violate an agreement with the district to keep the mask rule through the end of the school year.

“I think it’s nice because kids can finally see their teachers talk, and I also have a younger daughter who has spent all her time with no face, right?” said Jack’s mother, Andrea. “So for little kids, it’s really great because you can see the way words are pronounced and you can see spellings.

But third-grader Derrick Carter-Jacob kept his mask on as New York eliminated the requirement. “I don’t want to get COVID,” he said.

“Leave it on. There’s no reason for him to take it off until basically everybody is safe,” said his parent, Michael Jacob. “I want my son to be safe. I’m sorry. That’s the way I see it.”

John Bracey, a Latin teacher at Belmont High School in suburban Boston, says he intends to keep wearing his hospital-grade N-95 respirator through the end of the academic year even as district officials are expected to decide on their school mandate later this week.

The 41-year-old Bellingham resident said he and his wife have also decided to keep his two young school-age children wearing masks this week even though their district lifted the requirement Monday.

“I have major concerns on so many levels,” Bracey said. “It appears to be a decision made to benefit the most privileged and leaves everyone else to their own devices. We’re sacrificing the health of immunocompromised students, elderly staff, and those of us with young children. I just can’t find a public health or moral justification for removing them.”

In Needham, another Boston suburb, school administrators waited until Monday — a full week after the state eased its mask requirement — in part to prepare students for the transition this week to what they call a “mask-friendly environment,” says School Superintendent Daniel Gutekanst.

He said the work, which included posters and informational videos created by district officials, appears to have paid off, with no reports of major disputes or other issues around mask-wearing after classes ended Monday.

Melissa Bello says her two school-age children were among those that gladly removed their masks Monday.

She says her 8-year-old son has hearing loss in both ears and has been complaining of having trouble understanding people in school with everyone wearing masks the last two years.

“He’s working harder everyday in school and coming home more tired,” Bello said. “There’s not enough consideration for those kinds of tradeoffs in these mask mandates.”

But Jason Chan, another parent in Needham, said his two school-age children went in Monday still wearing masks — and likely still will through the week before the family reassesses.

Jason Chan, right, kneels next to his 5-year-old son Skyler, both of Needham, Mass., outside Newman Elementary School, Monday, March 7, 2022, in Needham. Chan said his two school-age children, including Skyler, who has never known schooling without a mask, would be perfectly content wearing them until the end of the school year, if it came down to it. (AP Photo/Steven Senne)

He believes his children, which include a 5-year-old son who has never known schooling without a mask, would be fine wearing them until the end of the school year if it came down to it.

“Honestly, the kids have been doing better than the parents with the masks,” Chan said. “I hear a lot of parents upset, but kids just don’t look at it the same way in terms of this civil rights issue. It’s like wearing a hat or a sweater for them.”