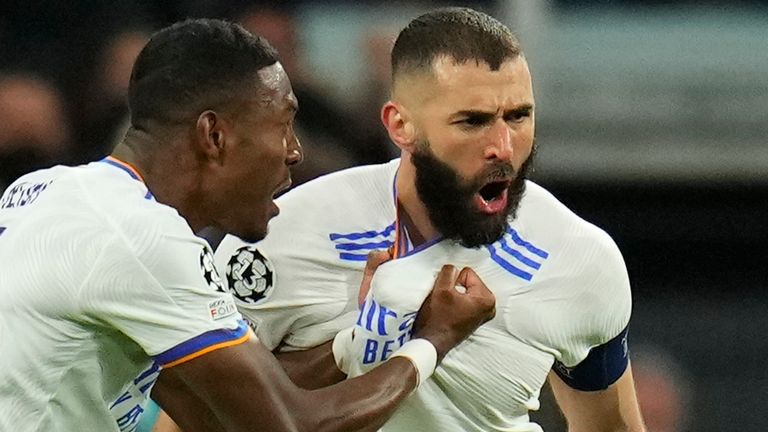 
Paris Saint-Germain manager Mauricio Pochettino said the “next few weeks are not going to be easy” after his side lost their Champions League last-16 tie against Real Madrid.

PSG took a 1-0 lead on the night thanks to Kylian Mbappe, who had an additional two goals ruled out, but Benzema’s 17-minute hat-trick took Real to a 3-2 victory on aggregate.

“The first goal completely changed the game,” Pochettino said. “For an hour, we were better than Real Madrid. The atmosphere changed in the stadium.

“We made some mistakes after that, we can’t say we didn’t. The worst feeling is that we were the better side, but we lost the tie in 10 minutes.

“Paris St-Germain have been chasing the Champions League for a number of years now. I’m really disappointed, upset – but these things can happen. The next few weeks are not going to be easy.”

Benzema: When PSG are pressed, it causes problems

Giving his reaction to the game, the 34-year-old suggested that PSG struggle to play under pressure.

“We knew they’re a team that if you put them under pressure, they don’t panic, but it’s more difficult for them,” Benzema said.

“When you take the ball off them, when you put them under pressure, they can’t connect with the three up front.

“It’s the problem of all the teams that want to play the ball out from the back. When they’re pressed, it causes them problems.”

“In the first leg, we have to say we were lucky to leave there only losing 1-0,” the Frenchman added. “But we knew it would be different in Madrid.

“We pushed, we conceded a goal, but we were confident that we would have chances. It’s a big Champions League evening and we showed we’re a big club.”

Real Madrid manager Carlo Ancelotti praised his side’s efforts and singled out Benzema’s contributions as well: “We suffered a lot in the first half, but we did it,” Ancelotti said.

“We had trouble getting the ball. We tried to press… But it was a good press from Karim that brought us the first goal and after that, the magic of this stadium and these fans came with it.”

Leonardo: Pochettino still part of the project for this season

PSG’s director of football, Leonardo, stated that Pochettino would remain a part of the club’s project for the current season after the game.

“We shouldn’t throw everything in the bin,” Leonardo told RMC Sport. “We shouldn’t start from scratch after every loss. The objective is to win the Champions League, and until half-time we were fine.

“We have to look to improve this team and maintain morale to play in Ligue 1 and to finish the season well. We should stay together.

“Pochettino is still part of the project for this season. It’s not the time to think about that.”

Speaking about the nature of the defeat, Leonardo said: “It’s a tough one to take. We can’t bury everything that was done. It’s hard to analyse.

“The incident of the foul on Donnarumma was crucial, but we struggled to manage that moment. We lost control. We need to look for solutions. But it’s a shame that a referee’s decision can be so influential in that sort of moment.

“But we should stay calm. We made errors, we should change things but we shouldn’t look back on everything. It’s difficult but, up until half time we were a well-organised team.”

When is the Champions League quarter-final draw?

Having progressed to the next stage of the Champions League, Real Madrid can now look forward to a quarter-final tie.

The Champions League quarter-final draw will take place on Friday, March 18 at 11am UK time, with the balls being drawn out at UEFA’s headquarters in Nyon, Switzerland. The semi-finals will also be drawn at the same time, meaning clubs and fans can plot out their potential route to the Paris final.

You will be able to follow the draw across Sky Sports’ digital platforms.

Previous articleWomen’s Cricket World Cup: Heather Knight says England have ‘knockout mindset’ after consecutive defeats
Next articleRalph Hasenhuttl on Manchester United links: I have everything I need at Southampton
- Advertisement -