Michigan State’s President Is Out. But the War Isn’t Over. 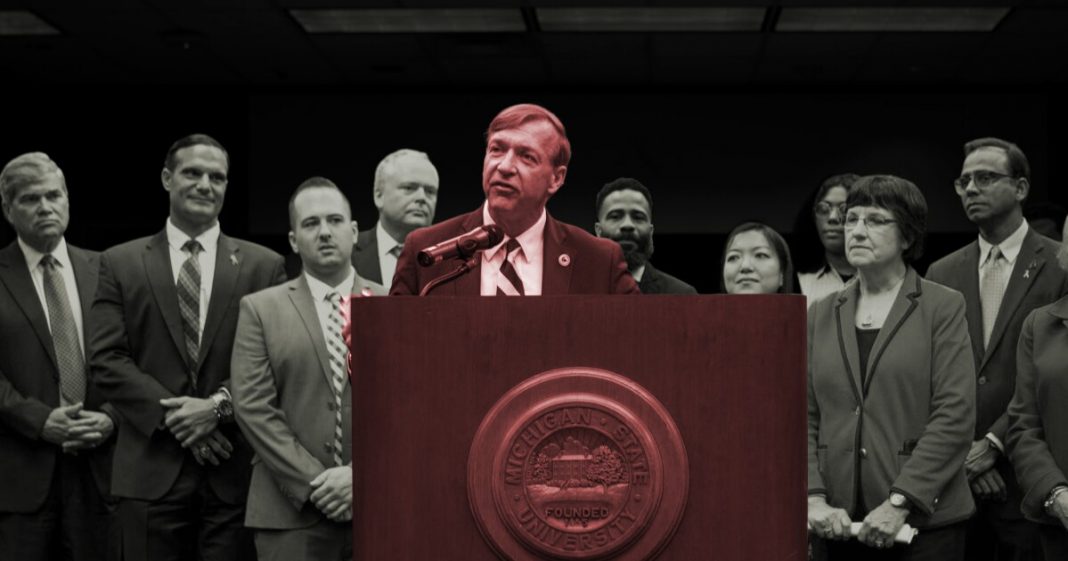 
nnouncing on Thursday his intention to resign as president of Michigan State University, Samuel L. Stanley Jr. effectively withdrew from an ignominious power struggle with the institution’s Board of Trustees. But Stanley’s departure is unlikely to quell an internecine feud at the university. Among other issues, a trustee-sponsored investigation of a dean’s forced resignation has led to charges of micromanagement, igniting open warfare between academic leaders and the governing board.

In a video address on Thursday, Stanley aligned himself with faculty- and student-governance groups, both of which have in recent days passed votes of no confidence in the board. “I, like the Michigan State University Faculty Senate and the Associated Students of Michigan State University, have lost confidence in the action of the current Board of Trustees,” Stanley said, “and I cannot in good conscience continue to serve this board as constituted.”

In a letter to the board’s chair, Stanley, who was named president in 2019, provided a contractually required 90 days’ notice of his pending resignation. His departure brings further upheaval to a university that has experienced frequent turmoil — and two other presidential resignations — in the five years since the Larry Nassar sex-abuse scandal rocked the campus and captured the nation’s attention.

Stanley’s announcement followed weeks of speculation and debate about the president’s fate. A month ago, the Detroit Free Press reported that the board had given Stanley an ultimatum — to resign or be fired. Since then, several rifts between members of the board and the university’s academic leadership have come more clearly into focus. One area of disagreement concerns the university’s handling of allegations that Sanjay Gupta, as dean of the Eli Broad College of Business, mishandled a charge of sexual misconduct in the college. Gupta resigned in August, after meeting with Teresa K. Woodruff, the provost, who later told faculty members that the dean had “failed in his mandatory reporting responsibility.”

“Additionally,” she said, “he failed to act in a timely and reasonable manner to protect students and uphold our values.”

Gupta was a popular dean with a lot of support in his college. While it is the provost’s prerogative to dismiss a dean, some of Gupta’s colleagues questioned if he’d been treated fairly. In response, the board hired an outside law firm to investigate the circumstances surrounding Gupta’s resignation. Additionally, the board has commissioned a broader review of the campus’s Title IX office.

The battle at Michigan State is an illustrative standoff, one in which the power and will of board members has come into direct conflict with what academic leaders and faculty members see as their rightful areas of responsibility. That tension is at the heart of numerous recent controversies in public higher education, where the line between proper board oversight and often-partisan-inflected micromanagement is blurred or crossed. Michigan State’s president may be leaving that battleground, but there’s no indication of a ceasefire on the horizon.

ensions between the university’s administration and its board have been ratcheting up for weeks. But matters escalated considerably in recent days, when the provost and president sent letters to the board, blasting trustees for directing their outside counsel to depose university employees about the Gupta case.

Most trustees, however, appeared unchastened, telling faculty members in a letter days later that the outside review of the case was justified and necessary.

“While we understand that some members of the community do not believe this is an appropriate review,” they wrote, “we respectfully disagree.”

Explaining their rationale, the trustees cited the Michigan Constitution, which charges the board with “general supervision of its institution.” They also cited the preamble of the board’s bylaws, which state that the board “exercises the final authority in the government of the university.”

Sent from the board’s official email account, the letter went out to all faculty and staff members on Tuesday. The letter, which is unsigned, was said to be from “the majority” of the board’s eight members, who are popularly elected. Not long after the letter went out, the Faculty Senate voted no confidence in the trustees.

Some cracks in the board’s approach have been clear from the start. Early in the controversy, Dianne Byrum, the chair, issued a statement slamming her fellow trustees for creating “confusion over the future of our university’s president.” Stanley, Byrum said, “has led our university through many challenges in recent years, and attempts to remove him from his post before his contract is complete are misguided.” (Barring his resignation or removal, Stanley’s contract was to run through July 31, 2024.)

Faculty members at Michigan State told The Chronicle on Thursday that they were dismayed by the continued insistence from board members that they have the authority or mandate to second-guess a personnel decision.

“The board has decided that it wants to reach down into the administrative structure of the university because they don’t like the fact that Sanjay Gupta is no longer dean,” said Jack Lipton, a professor who, as chairman of the university committee on academic governance, is a member of the Faculty Senate.

“What I’m seeing here is an issue with the board doing things it’s not supposed to do, and getting involved in the executive management of the university,” added Lipton, chair and professor of translational neuroscience.

Lipton said he had no confidence in the board. “I wish they would all resign,” he said.

The Chronicle sent emails on Thursday to several of the board’s members, including the chair, but none of them agreed to be interviewed. In a statement, the board said, “The MSU Board of Trustees appreciates President Stanley’s service over the past three years. President Stanley arrived at a difficult time and provided steady leadership to guide us forward while the entire world was experiencing severe disruption and uncertainty. The Board of Trustees will work cooperatively with President Stanley during this transition, and more details will be shared with the campus community as information is available.”

As candidates for the board, two current trustees publicly said that they would resign if they were on the receiving end of no-confidence votes. During a University Council forum, held on October 16, 2018, Brianna T. Scott and Kelly Tebay both said they would step aside in such a situation, according to a transcript of the event.

“If those of you that are the key stakeholders here on campus feel that you have no confidence in me, I think it’s hard to work effectively with that type of feedback,” Scott said, according to the transcript. “I would say that I would resign. I would be sad to do that.”

Tebay, according to the transcript, said, “For a vote of no confidence, I would resign. Absolutely. I don’t think that if you’re a board member, and your staff and faculty don’t have any faith in you, then you absolutely should resign. Yes, I would resign.”

Tebay did not respond to an email on Thursday asking about the comment or whether she intends to resign.

Scott, in response to a summary of the remarks, said in an email, “I do not believe that is an accurate representation of my statement.” The Chronicle sent a screenshot of the statement to Scott, who did not respond further, beyond saying she appreciated receiving the screenshot.

he controversy at Michigan State has attracted national attention, drawing rebukes from higher-education leaders who see in the story a problematic drift toward board meddling. Barbara R. Snyder, president of the Association of American Universities, issued a forceful statement last month, saying she was “appalled at reports of interference in MSU’s day-to-day operations by the university’s trustees.”

Peter McPherson, who served for 16 years as president of the Association of Public and Land-Grant Universities, told The Chronicle on Thursday that he had spoken earlier in the day with a couple of college presidents who expressed concern about the drama unfolding in East Lansing: “What’s happening at Michigan State is not right. That is broadly the view.”

Before his appointment at Michigan State, Stanley was president of Stony Brook University, part of the State University of New York system. He is a physician and medical researcher who earned his medical degree from Harvard University.

Reactions from higher-education leaders to the Michigan State case feel oddly reminiscent of another governance controversy from a decade ago. When the University of Virginia’s Board of Visitors forced out Teresa A. Sullivan, in 2012, the backlash was so strong that the board swiftly reinstated her. The dispute drew widespread attention largely because it was seen as an example of board overreach that showed little regard for academic traditions and values.

The two cases resonated across higher education, McPherson said, “because people broadly thought both Sullivan and Stanley were very good people and were doing a good job and the board got more involved in things than they should.”

“There are an infinite number of things boards can take an interest in,” he said, “but generally they should not try to get into management. The line is a difficult one to draw, and not a definitive one.”

(Ironically, Sullivan, a Michigan State alumna, was tapped by Stanley to serve as interim provost, in 2019. She replaced June Youatt, who had resigned amid the fallout of the Nassar abuse case.)

For professors at Michigan State, Stanley’s departure has exacerbated uncertainty about what may be in store for the university and whether the board’s recent actions are part of some larger agenda.

“There’s more to this than just a board scrabbling for power,” said Dànielle Nicole DeVoss, a member of the Faculty Senate and chairperson of writing, rhetoric, and American cultures. “I have to assume there’s much more than that at stake here.”