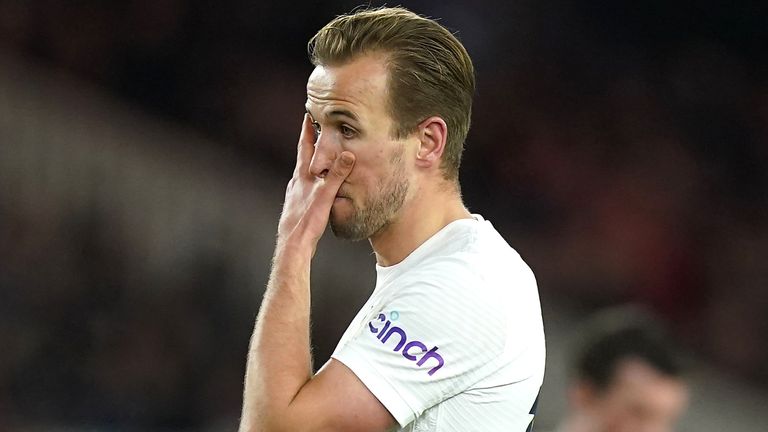 
Teenager Josh Coburn was the hero as Middlesbrough produced another FA Cup upset by knocking out Tottenham with a 1-0 extra-time victory in the fifth round.

Boro dumped Manchester United out on penalties at Old Trafford in the fourth round and followed it up in style to beat Spurs, with 19-year-old Josh Coburn’s 107th-minute strike settling the tie.

The Championship outfit were the better side throughout, booking their quarter-final spot and ensuring Spurs will end another season without a trophy after an abject display on Teesside.

Who knows how Antonio Conte will react to this defeat as their inconsistency continues to derail any progress and this result could have implications over his long-term future as well as that of Harry Kane, whose desire to win
silverware is consistently not met at Spurs.

Only a strong finish in the Premier League and a late surge into the top four can rescue this season, but that looks a stretch on this evidence.

Tottenham’s biggest threat came from the wings as they found space on both flanks. Ryan Sessegnon burst down the left but his cross was intercepted with Harry Kane waiting to tap in and then Boro defender Dael Fry produced a fine tackle to deny Dejan Kulusevski after he surged into the area from the other flank.

It was another break down the right that presented Tottenham with their best chance in the 39th minute as Kulusevski set Matt Doherty free and the Irishman got to the ball before goalkeeper Joe Lumley, who raced out of his net, but his shot at an open goal was wayward and flew over.

Doherty had another chance shortly after but he dragged a shot wide from the edge of the area as Spurs tried to take control.

Boro enjoyed a good start to the second half and should have gone ahead in the 55th minute but Matt Crooks, one of the heroes of the win at Manchester United, put a free header from Jonny Howson’s corner over the crossbar when he should have buried it.

Spurs offered some response, with Eric Dier forcing Lumley into a good save from a 25-yard free-kick before Spurs thought they had taken the lead from the corner.

Ben Davies flicked Heung-Min Son’s corner on at the near post and Kane, who had his shirt pulled when making his run, tapped home but the flag went up for a marginal offside call.

Both sides had chances to win it in normal time as Howson headed over from a corner after Isaiah Jones had burst into the box and shot straight at Hugo Lloris, while Son headed an injury-time chance straight at Lumley when he should have scored.

The hosts sensed another upset and had Tottenham on the rack in the opening 15 minutes of the additional period.

McNair fizzed an effort just off target and then Marcus Tavernier found space at the far post but shot straight at Lloris and Spurs survived.

But it was only a matter of time until Boro got their reward and Coburn wrote his name into folklore. He was played in down the right, with Emerson Royal keeping him onside, and fired past Lloris to spark mass scenes of celebration at the Riverside.

It was nervy at the end, with Lumley somehow keeping out a deflected Dier effort, but they held on to complete a famous night.

Tottenham boss Antonio Conte: “We lost a good chance to go to the next round and play in the quarter-finals of an important competition like the FA Cup. There is for sure disappointment for the final result. I think this type of game, especially when you play away, against a team that play in the [Championship] you have to know the difficulty.

“For this reason, we had to try to kill – in a sporting way – the opponent quickly. We have had the chances to score but we didn’t take it. And then you give confidence to your opponent and you risk [defeat]. At the end, Middlesbrough won the game and deserved to go to the next round.

“Today we are talking about a defeat. The last game we won. Two games ago we lost. Three games ago we won. I can’t hide the reality. We’re having too many ups and downs. This is a problem and maybe it was also in the past. In my opinion, there is only one way to try to improve: to continue to work in every aspect.”

Wilder: We deserved it

Middlesbrough boss Chris Wilder: “In the first 15-20 minutes we gave the ball away cheaply but after that we grew into it and built a little bit of momentum. We may be overplayed at times but it’s quite difficult for players when the opposition have the ball for a long period of time. You don’t just want to turn it over and give it back. But I thought we got the balance right, especially in the second half.

“We created some really big chances and I’d have been disappointed for the whole of the football club [if we hadn’t won] because I believe we created enough to put our noses in front. There were some great individual performances in a fabulous team one.”

Follow every Tottenham game in the Premier League this season with our live blogs on the Sky Sports website and app, and watch match highlights for free shortly after full-time.

Get all this and more – including notifications sent straight to your phone – by downloading the Sky Sports Scores app and setting Tottenham as your favourite team.

Middlesbrough will next face Luton in the Championship on Saturday March 5 at 3pm.

Tottenham will return to Premier League action on Monday March 7 at 8pm as they take on Everton, live on Sky Sports.