Missiles fired toward US consulate in Iraq came from Iran: officials 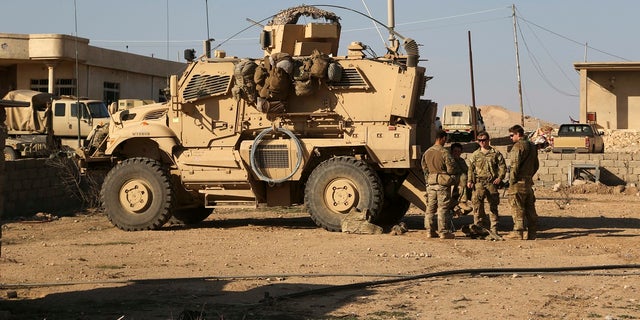 Iran fired a series of missiles toward the U.S. consulate in Erbil, Iraq, on Sunday, according to U.S. officials.

The missiles, according to a senior U.S. official, were fired towards the U.S. consulate in Erbil from Iran. Of the multiple missiles that were fired, the official said, none made contact with the consulate.

Officials said all U.S. personnel are accounted for and that no casualties have been reported after the airstrike near the unmanned consulate in Erbil, the capital of the autonomous Kurdish region of northern Iraq.

In this Feb. 23, 2017 photo, U.S. Army soldiers stand outside their armored vehicle on a joint base with Iraqi army south of Mosul, Iraq.
(AP Photo/ Khalid Mohammed, File)

“There is no damage or casualties at any U.S. Government facility,” a State Department Spokesperson told Fox News. “The incident is being investigated by the government of Iraq and the Kurdish Regional Government and we refer you to them for comment. We condemn this outrageous attack and display of violence.”

A national security official told Fox News that there is no indication the missile were intended for U.S. facilities.

The last time missiles were fired from inside Iran was Jan 2020 after the Soleimani strike when Al Assad Air Base was the target, an official told Fox News.