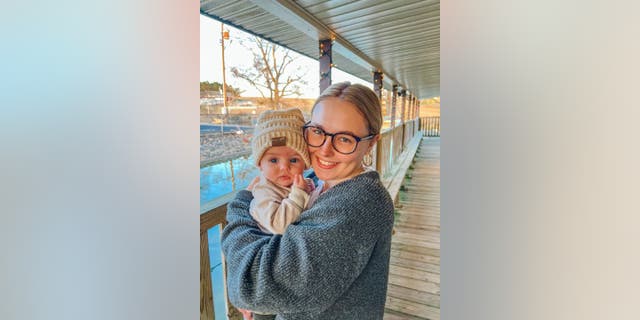 An innocent video of a baby trying a piece of steak has caused quite the stir on TikTok because people have strong feelings on beef, diets and childcare.

Katie Harley, a 23-year-old substitute teacher and mother of six-month-old Eliza, recorded a video of her daughter sampling her first steak filet, and shared the moment to TikTok for her friends and family to see.

Harley didn’t expect the clip to go viral with some commenters accusing her of feeding Eliza a “bloody” steak all because they didn’t like the pink tone inside the filet, she told Fox News Digital, in a phone interview.

Katie Harley (right) and her daughter Eliza (left) became the subject of conversation on TikTok after the mother of one shared a video of her daughter gumming at a steak filet.
(Photo courtesy Katie Harley)

Unbeknownst to commenters, Harley served steak to Eliza after her daughter’s pediatrician recommended it for a baby’s growth and development, Harley said.

9 SURPRISING FIRST FOODS YOU SHOULD FEED YOUR BABY

Harley, who is a first-time mom, said her pediatrician made the unusual food recommendation after he learned that she wanted to feed Eliza “real food” as soon as possible instead of baby food.

“At our appointment, we went over what foods we’re going to start introducing,” Harley told Fox News Digital. “He wanted us to introduce things like peanut butter because it’s an allergen, he wanted us to do steak because it’s very nutrient-rich and lean, and we also introduced her to a bunch of fruits and veggies. There was a whole list.”

Harley said the pediatrician’s list of recommended foods advised parents to cook steak filets until its internal temperature reaches 145 °F, which is the minimum temperature the USDA approves of for preventing foodborne illnesses from steak.

She went on to add that her husband grilled the steak for Eliza and the rest of their family at their home in North Augusta, South Carolina.

From what Harley can recall, the steaks might have been marinated but she and her husband made sure to skip fresh salt, pepper and seasoning flakes for Eliza’s filet because they figured she wouldn’t like it and could possibly start coughing if she inhaled it.

“Eliza does not have any teeth, so she basically gummed at it for like maybe 30 seconds, then she was disinterested,” Harley said.

To determine how to cut the steak, Harley consulted various parenting websites and found a technique called “baby-led weaning,” which is a feeding strategy that skips traditional purées and encourages babies to feed themselves with their fingers.

“Babies can start to eat meat as soon as they begin solid foods around 6 months of age,” Dr. Jessica Madden, a medical director at Aeroflow Breastpumps, told Fox News Digital. “If using the ‘baby-led’ weaning approach, it’s recommended to start with soft, mushy foods like avocados, cooked sweet potatoes, and bananas. If meats are introduced around this age they should be of a very soft consistency, i.e. turkey meatballs, long strips of soft-baked chicken, or braised shredded beef.”

While Madden believes the size of the steak filet served to Eliza “appears [to be] appropriate,” she warns that “tough” meats can become a choking hazard if a baby has teeth that are prominent enough to bite off pieces.

Madden also recommends cooking beef steaks until its internal reaches at least 170 °F, if the filets are going to be served to children. The reason? To kill off bacteria and parasites, including E Coli and Salmonella, which cause foodborne illnesses.

The Ohio-based pediatrician and neonatologist advises parents to avoid serving rare steaks to infants and children, so they can minimize their kids’ chance of getting sick. However, if for whatever reason parents insist on serving rare steaks, Madden suggests they consider giving their children age-appropriate probiotics to balance gut bacteria if they happen to eat “undercooked meats.”

In Harley’s case, her daughter Eliza doesn’t seem to have been served undercooked meat – at least according to the USDA’s minimum 145 °F temperature recommendation.

The American Angus Association, the nation’s largest beef breed organization, considers steaks cooked to 145 °F to be “medium” in doneness, which has a “warm pink center,” according to the association’s Certified Angus Beef website.

Harley told Fox News Digital that she thinks the TikTok commenters who have tried to suggest the pink steak filet she served Eliza was bloody or could be compared to child abuse are uniformed.

For example, the red liquid in packaged butchered meats is technically not blood. It’s actually myoglobin, a protein that gives meat and its juices their red color. The hue darkens and seemingly disappears when It’s exposed to heat.

THE ‘BLOOD’ OOZING FROM YOUR STEAK IS OFTEN SOMETHING ELSE ENTIRELY

“I’ve always felt like I’m a well-researched and well-informed parent,” Harley told Fox News Digital while noting that she’s confident she made the right decision to feed Eliza steak.

Some commenters continue to disagree with Harley’s choice, but she said she’s learned to hold back from responding to the harsh critics who aren’t interested in listening.

“Even if you’ve made mistakes, you can learn from them,” she continued. “You don’t have to feel down about negative comments even if you ended up being wrong. There are a lot of people on TikTok who have been wrong and have changed their behavior and then moved on from it.”

On the positive side, Harley said she’s been grateful that unexpectedly gone-viral steak posts have opened conversations on how moms feed their babies.

“Feeding your child is such a personal thing. It’s a lot of what you want to do,” Harley said. “Some people won’t give their babies solid food until they’re a year, some people take a baby food course or exclusively breastfeed. There are so many different options on how to feed your children.”

A spokesperson for the USDA Food Safety and Inspection Service told Fox New Digital that all people are at risk of getting a foodborne illness from undercooked meat.

In an emailed statement, the USDA wrote, “Children are at greater risk for experiencing a more serious illness or even death should they get a foodborne illness. [But,] as long as the steak has reached the recommended safe minimum internal temperature of 145 °F as measured with a food thermometer and [is] allowed a 3-minute rest time [before carving], it would be safe for consumption (even for children).”

“For reasons of personal preference, consumers may choose to cook meat to higher temperatures,” the USDA continued. “Ultimately, appearance and color are not reliable indicators of safety or doneness. The only way to tell if harmful bacteria have been destroyed is by using a food thermometer.”

BBQ Steaks on the Grill
(iStock)

New and repeat parents who aren’t sure if a steak filet is the right food option for feeding their baby, a beef purée or a traditional jar of baby food might be the better option depending on the infant’s age, according to Dr. Anastasia Gentles – a specialty medical officer for pediatric urgent care at Pediatrix Medical Group.

“All babies need is breast milk when they start out and right around five to six months they’re going to start to need extra [nutrition] because the breast milk is usually not keeping up with their growth,” Gentles told Fox News Digital. “That’s the reason why we start introducing other foods.”

If parents find that they need to introduce food to keep their babies in good health, Gentles recommends puréed vegetables and fully-cooked puréed meats after six months.

At the six-month mark, Gentles said babies are learning to control their tongues, necks and heads, which is why many pediatricians recommend purées and prepared baby foods. Over time, parents can let puréed foods get progressively chunkier as their child learns how to control the muscles they need for eating, Gentles explained.

The California-based medical officer also warns that parents should try to avoid spices and bite-sized meats that are round or hard because it can be an irritant or choking hazard for infants.

“You don’t want to give a baby too much protein because their little kidneys can’t take the same load an adult can,” Gentles noted.

In place of filet mignon, Gentles suggests starting babies off on cereals, which have been subject to countless nutrition studies and have been fed to millions of babies in the U.S. with little issue.

Fox News Digital asked Harley how she feels about being the subject of discussion on TikTok and the outside world.

“Steaks and babies are two topics that everyone has a lot of opinions about,” she said. “[My videos are] like the perfect storm of everyone wanting to comment on it.”

Harley continued, “At the end of the day, I have a really cute kid. It’s pretty hard to feel down.”