Monkeypox is spreading around the world. What is the disease and how dangerous is it? 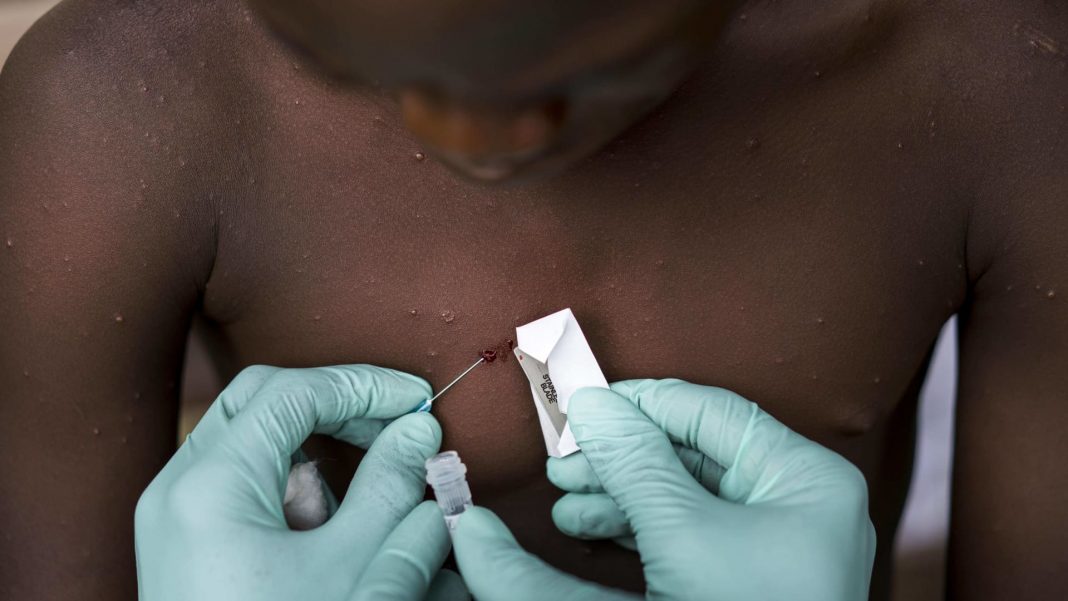 An image created during an investigation into an outbreak of monkeypox, which took place in the Democratic Republic of the Congo, 1996 to 1997, shows the arms and torso of a patient with skin lesions due to monkeypox, in this undated image obtained by Reuters on May 18, 2022. CDC/Brian W.J. Mahy/Handout via REUTERS THIS IMAGE HAS BEEN SUPPLIED BY A THIRD PARTY.

Health authorities in Europe, the U.S. and Australia are investigating a recent outbreak of monkeypox cases, a rare viral disease typically confined to Africa.

Germany on Friday reported its first case of the virus, becoming the latest European country to identify an outbreak alongside the U.K., Spain, Portugal, France, Italy and Sweden.

The U.S. and Australia this week also confirmed their first cases, as experts attempt to determine the root cause of the recent spike.

While some cases have been linked to travel from Africa, more recent infections are thought to have spread in the community, raising the risks of a wider outbreak.

The U.S. Centers for Disease Control and infection and the U.K.’s Health Security Agency said they are investigating a range of cases including those among individuals who self-identify as men who have sex with men, and urged gay and bisexual men in particular to be aware of any unusual rashes or lesions.

In the U.K. alone, cases have doubled since the first was identified on May 7. The country now has 20 confirmed cases of monkeypox, though there are concerns there may be many more undetected.

Individuals exhibiting symptoms of the virus — which include rashes and fever — are being urged to seek medical advice, contacting any clinic before visiting.

“These latest cases, together with reports of cases in countries across Europe, confirms our initial concerns that there could be spread of monkeypox within our communities,” Susan Hopkins, chief medical advisor at the UKHSA, said Wednesday.

Monkeypox is a rare disease caused by the monkeypox virus, part of the same family as smallpox, though typically less severe.

Generally occurring in remote parts of Central and West Africa, the virus was first detected in captive monkeys in 1958. The first human case was recorded in 1970.

Monkeypox reemerged in Nigeria in 2017 after four decades without a single confirmed case. As of May 2022, 450 cases have been reported in the country.

There have since been sporadic cases reported across 10 African countries, including Nigeria, which in 2017 experienced the largest documented outbreak, with 172 suspected and 61 confirmed cases. Three-quarters were among males aged 21 to 40 years old.

Cases outside of Africa have historically been less common, and typically linked to international travel or imported animals. Previous cases have been reported in Israel, the U.K., Singapore and the U.S., which, in 2003, reported 81 cases linked to prairie dogs infected by imported animals.

How do you catch monkeypox?

Monkeypox spreads when someone comes into close contact with another person, animal or material infected with the virus.

The virus can enter the body through broken skin, the respiratory tract or through the eyes, nose and mouth.

In this 1971 Center For Disease Control handout photo, monkeypox-like lesions are shown on the arm and leg of a female child in Bondua, Liberia.

Monkeypox is not generally considered a sexually transmitted disease, though it can be passed on during sex.

What are the symptoms?

Patients typically develop a rash one to three days after the appearance of fever, often beginning on the face and spreading to other parts of the body, such as the palms of the hands and soles of the feet.

The rash, which can cause severe itching, then goes through several stages before the legions scab and fall off.

The infection typically lasts two to four weeks and usually clears up on its own.

What is the treatment?

There are currently no proven, safe treatments for monkeypox, though most cases are mild.

People suspected of having the virus may be isolated in a negative pressure room — spaces used to isolate patients — and monitored by health-care professionals using personal protective equipment.

The palms of a monkeypox case patient from Lodja, a city located within the Katako-Kombe Health Zone, are seen during a health investigation in the Democratic Republic of Congo in 1997.

Smallpox vaccines have, however, proven largely effective in preventing the spread of the virus. Countries including the U.K. and Spain are now offering the vaccine to those who have been exposed to infections to help reduce symptoms and limit the spread.

How dangerous is it?

Monkeypox cases can occasionally be more severe, with some deaths having been reported in West Africa.

However, health authorities stress that we are not on the brink of a serious outbreak and the risks to the general public remain very low.

“While investigations remain ongoing to determine the source of infection, it is important to emphasize it does not spread easily between people and requires close personal contact with an infected symptomatic person,” Colin Brown, director of clinical and emerging infections at the UKHSA, said Saturday.

Health authorities in the U.K., U.S. and Canada urged people who experience new rashes or are concerned about monkeypox to contact their health-care provider.

The UKHSA added that it is reaching out and providing advice to any potential close contacts of cases and health-care worker who may have come into contact with infected patients.

Previous articleSHE’S ALL THAT: SINGER-SONGWRITER DOT. IS BACK IN FULL SWING
Next articleMargot Robbie to Star in Ocean’s 11 Prequel: Everything We Know – E! Online
- Advertisement -