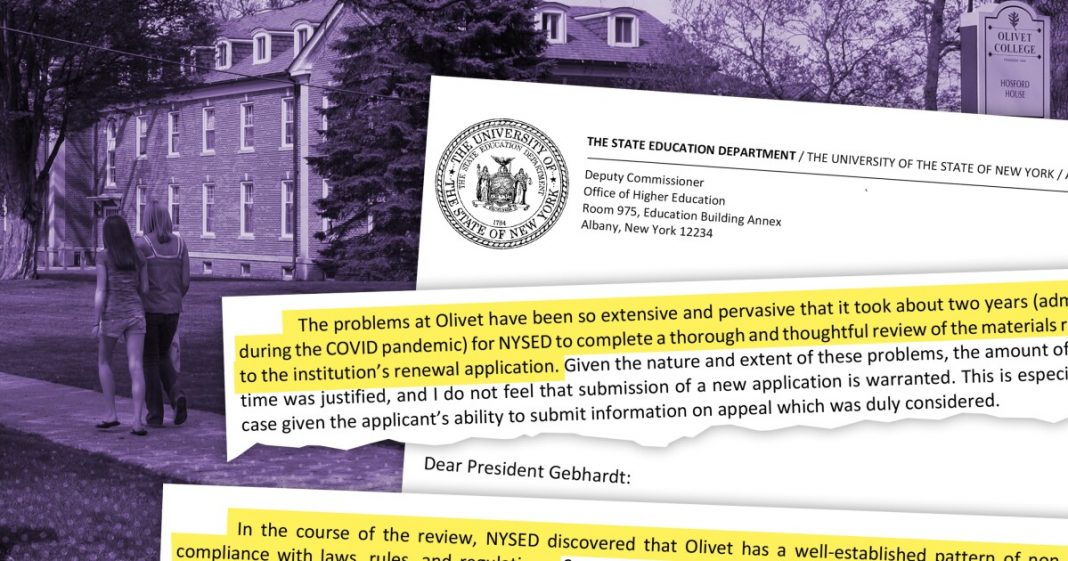 
New York’s deputy commissioner for higher education dealt a new blow to Olivet University late last month by forcing it to stop academic operations in the state, citing the college’s “pattern of mismanagement of the institution’s finances” and “a well-established pattern of noncompliance with laws, rules, and regulations,” according to a letter to the college from the state’s Education Department.

Olivet is a small bible college based in California that was founded by a pastor, David Jang, in 2000. Two years ago, the college pleaded guilty to falsifying records and participating in a conspiracy as part of an alleged multimillion-dollar fraud and money-laundering scheme, and was sentenced to pay a $1.25-million fine. Newsweek recently reported that Olivet was the subject of a new federal investigation, an accusation the college disputes. As if the saga couldn’t get any stranger, Newsweek, which has covered the college’s trials, was once owned by a company that was named alongside Olivet in the 2018 indictment.

New York’s decision came on May 17, and Olivet appealed. In a letter to Olivet dated June 30 in response to the appeal, William Murphy, New York’s deputy commissioner for higher education, upheld the decision.

“The evidence (including tax liens, civil lawsuits for defaulting on contracted payment terms, failure to pay workers compensation insurance, and the criminal case in which Olivet pled guilty to falsification of business records and conspiracy) shows a pattern of mismanagement of the institution’s finances, indicating a lack of capacity or lack of commitment on the part of Olivet to manage its finances in a manner conducive to operating a degree-granting institution in this state,” Murphy writes in the letter.

The state gave three reasons: Olivet did not have the resources it needed to carry out its academic mission; it “has failed to responsibly administer institutional policies and programs”; and it “has failed to establish, publish, and enforce explicit policies with respect to working conditions,” according to Murphy’s response to Olivet’s appeal.

A spokesman for the New York State Education Department declined to comment further. Olivet did not respond to a request for comment in time for publication.

However, the college did offer a statement online the same day it received the response to its appeal from the state, saying it “ended a good, 10-year run in the state of New York with the conclusion of our temporary permission to operate by the New York Board of Regents.”

The statement made no mention of the agency’s denying Olivet’s request to continue its academic operations in the state. Instead, it thanked God for its students and “everyone who has made providing education in New York possible and positive for Olivet University until now, especially at the New York State Education Department.” It also laid out plans for using the land it owns in Dover, N.Y., for continuing its Evangelical Center based at the location. Olivet operates several other campuses, according to its website, and it is accredited by the Association for Biblical Higher Education Commission on Accreditation.

Olivet’s troubles began in 2018, when its relationship with Newsweek Media Group came under scrutiny by the Manhattan district attorney’s office. The office was investigating free advertising Olivet offered in Newsweek to county officials in New York when looking to start its new satellite campus. The full-page ads, promoting a local airport and tourism in the county and published over the course of three months, were worth an estimated $149,000, The Chronicle reported at the time.

Later that same year, the former parent company of Newsweek, IBT Media, along with the Christian Media Corporation and Olivet, were charged in a $35-million scheme to defraud lenders and obtain loans to keep the companies running and for Olivet to buy land in New York, the New York Post reported.

All parties involved would eventually plead guilty to charges related to the scheme, with Olivet also paying the $1.25-million fine.

Johnathan Davis, a co-founder of IBT Media and its chief executive, also co-owns Newsweek. Davis is married to Tracy Davis, who was president of Olivet when the college pleaded guilty to the money-laundering accusations.

The other co-owner of Newsweek, Chief Executive and President Dev Pragad, told the magazine he had left Jang’s Christian sect and had no ties to Olivet University.

Johnathan Davis did not answer a LinkedIn messages seeking comment. Pragad directed a reporter to a spokeswoman for Newsweek.

The spokeswoman wrote in a statement that “since becoming an independent entity in 2018, Newsweek has been firmly committed to maintaining the independence and integrity of the newsroom” and that the newsroom’s recent article on New York shutting down the college in the state “is just one example of Newsweek’s reporting on the Olivet organization — and it’s the kind of work that reminds all of us why it is important to champion quality journalism at the highest standards.”

Tracy Davis is no longer president of Olivet, but “has continued her employment at the institution as the university’s dean of academic affairs, with a special focus on the university’s New York state operations,” Murphy wrote.

Her employment at Olivet, along with that of other high-level administrators and board members for the college throughout the time of the criminal conspiracy, all served as part of the department’s reasoning to deny Olivet’s request to continue academic operations in New York, according to the letter.

According to Murphy’s response letter, Olivet had been operating out of compliance with state Board of Regents rules concerning the “standards for the registration of undergraduate and graduate curricula,” particularly with regard to its financial resources to accomplish the mission of a college.

Olivet argued that its recent legal matters were “unfair to consider” for its renewal application. “On the contrary,” Murphy writes in response, “these failings are part of a larger pattern of poor administration, and addressing such problems only after being caught in a criminal conspiracy does not render them moot.”

Murphy wrote that Olivet has a “demonstrated pattern” of “allegedly defaulting on contracted payment terms” in a review of the more than 50 lawsuits the university informed the state of. “In some cases, Olivet settled cases and then again defaulted on the settlement agreement.” The lawsuits together, he writes, present “a clear picture of Olivet’s habitual failure to provide competent stewardship of the institution via clearly established policies and programs.”