Native American Languages Are Disappearing. Colleges Could Help Preserve Them. 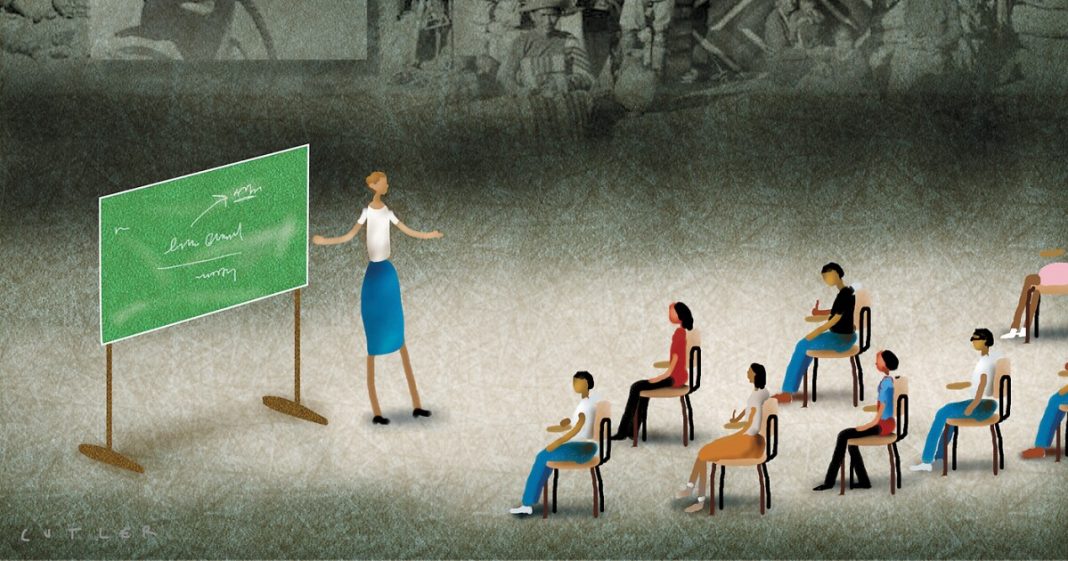 
In 2021, the Bodéwadmimwen language was in danger of disappearing. The tongue traditionally spoken by Potawatomi Native Americans had only eight people who’d learned it as their first language, and the average age of the remaining speakers was over 80 years old.

Without fast action, the Potawatomi could lose a key piece of its cultural heritage, said Tesia Zientek, the education director of the Citizen Potawatomi Nation in Oklahoma and president of the National Indian Education Association’s board of directors. The Potawatomi people belong to seven federally recognized tribal nations across five U.S. states.

“If you lose the language, we can still understand ourselves as Potawatomi. We, of course, still have our tribal governments, still have citizens. But we lose that way of looking at the world that is distinctly Potawatomi,” Zientek said. “And I think that would be an insurmountable loss.”

Thanks to an $82,000 federal grant, the Citizen Potawatomi has teamed up with six colleges to offer an online course on Bodéwadmimwen that began in the fall of 2022.

Similar efforts are taking shape at a growing number of colleges and schools. In 2021, the U.S. Administration for Native Americans awarded roughly $20 million in Native Language Preservation and Maintenance Emergency grants to more than 200 tribes and Indigenous community organizations.

According to the Administration for Native Americans, there are 245 distinct Indigenous languages in the United States, but 65 are already extinct and 75 are nearing that point, with only a few fluent speakers remaining. And the need to develop more fluent speakers has only grown more dire.

Native Americans died from Covid-19 at substantially higher rates than Americans from other racial and ethnic groups, according to a late 2021 study. For some Native languages, this has led to faster deterioration in the number of remaining speakers, who tend to be older and more susceptible to the disease. Losing elders — often defined as a tribal member who is over 55 or 60 years old — was creating a crisis, said Julia Wakeford, policy director for the National Indian Education Association.

At the same time, the U.S. and Canadian governments were finally coming to grips with the legacy of so-called “Indian boarding schools,” where Native children were forcibly removed from their families and cultures to assimilate into European-American society. The children often suffered emotional and physical abuse — and in some cases, died. In June 2021, the U.S. government introduced the Federal Indian Boarding School Initiative, which in part began documenting the lingering effects of that abuse. One of the many things that the schools tried to rip from Native children, Wakeford said, was language.

More language-restoration funds could be on the way. At the White House Tribal Nations Summit in late 2022, the Biden administration announced it would draft a 10-Year National Plan on Native Language Revitalization.

In the meantime, a growing number of colleges are working with tribal nations to help Native students find new connections to their heritage and, as some Native-language experts call it, awaken “sleeping” tongues.

The Citizen Potawatomi Nation has tried to make it as painless as possible for colleges to offer its language courses. Through the grant, the tribal nation developed the syllabus, pays for the professor, and offers an online course, Potawatomi One, on its own digital-learning platform. All the nation asks, essentially, is for the university to put it in the course catalog and offer credit.

To decide which colleges to pair up with, Zientek said, organizers looked for regional institutions with the highest percentages of Potawatomi students.

“We want to meet our students where they are,” Zientek said. “If it’s not until they’re 19 and in college and realize that they can get some language credit for taking their heritage language, then we’re happy to catch them at that point in their life.”

The goal of the course is not to necessarily produce fluent speakers, Zientek said. Learning and internalizing a language takes a lot more than a couple of terms. But she hopes it will inspire students to reconnect with their community and seek out more immersive learning experiences — like the popular master-apprentice model, where students pair or even live with a speaker, usually an elder — to gain true fluency.

Instead of us having to worry about the enrollment numbers, we can really be driven by the quality of the education and learning outcomes.

At East Central University, in Oklahoma, three students participated in the first term of Potawatomi One, which was taught virtually and across five other institutions for the first time in the fall. Scott Ketchum, director of Native American Studies at ECU, said he was thrilled when the Citizen Potawatomi Nation reached out and he jumped at the chance to add another Native language to the course catalog. He said it was a collaborative project, but one where the university needed to let the tribe lead.

“There are people who have been working in this space, in language revitalization, for years. … Our No. 1 resource is those tribal communities,” Ketchum said. “It’s about taking oftentimes a hands-off approach and having them drive curriculum.”

Negotiating exactly what that meant, Zientek said, was more complicated than it may seem. Discussing tribal sovereignty, intellectual-property rights, and other logistical details took longer than developing the curriculum, Zientek said, but it was essential to the program. And the class’s fully virtual format and grant funding allowed for small enrollment numbers at individual institutions.

“Instead of us having to worry about the enrollment numbers, we can really be driven by the quality of the education and learning outcomes,” Ketchum said.

At Fort Lewis College, in Colorado, a new partnership with the Southern Ute Indian Tribe is training bilingual teachers to instruct a new generation of Indigenous-language speakers.

With a three-year project grant from the Administration for Native Americans, the tribe created the Southwest Indigenous Language Development Institute certification program, in which participants learn the Ute language (if they don’t already speak it) and the pedagogy of language education. The first cohort of teachers is set to complete the two-and-a-half-year program in May.

Jenni Trujillo, the dean of Fort Lewis’s School of Education, said the college has “a distinct responsibility” to help in language-revitalization efforts. Fort Lewis is one of six Native American-serving, nontribal colleges, but it got its start, after the fort was decommissioned, as an Indian boarding school.

“Languages in the boarding schools were stolen. People were beaten, they had their skin scrubbed, they had their mouths washed out with soap, they had their hair cut,” Trujillo said. “Because of the fact that language was stolen, it’s our educational and even moral responsibility to revitalize these languages.”

Culture is heavily ingrained in the program. Several language-revitalization experts told The Chronicle that the importance of heritage distinguishes Indigenous-language programs from, say, French or Spanish. A quick unit on culture can’t be tacked onto the end.

Many elders have said that you don’t learn language by sitting in the classroom. … You have to go and be present and build a relationship with elders to talk about these cultural teachings.

Crystal Rizzo, the director of the Southern Ute Indian Tribe’s Cultural Preservation Department and a participant in the program, said incorporating cultural teaching and events as part of the language program is paramount. The curriculum and activities, for example, might change depending on the season: Winter is the time for storytelling and oral history; in the summer, students attended a workshop on the making of yucca cordage, putting their vocabulary into practice to learn about the traditional handicraft.

At all times, elders are welcome to watch or actively teach classes, passing along vital knowledge.

“Many elders have said that you don’t learn language by sitting in the classroom. That’s not how you learn traditionally,” Rizzo said. “You have to go and be present and build a relationship with elders to talk about these cultural teachings.”

Trujillo and Rizzo said certificate holders will be eligible to be teachers in the local school district, putting to use their training in bilingual education.

“The State of Colorado and the school districts are willing to recognize the value of this program and the wisdom and talent that these teachers bring forward,” Trujillo said.

Even as funding for Indigenous-language preservation grows, the opportunities to win these grants are limited, and the competition is fierce. Essentially all Native languages are endangered to varying degrees.

Ofelia Zepeda has been working to revitalize Native American languages for decades as a Tohono O’odham poet, professor of linguistics, and director of the American Indian Language Development Institute at the University of Arizona.

“There are a number of tribes that compete for these funds every year,” Zepeda said. “So somebody has to lose.”

Wakeford, of the National Indian Education Association, said that the competition can add internal conflict, as tribes argue about who needs the funding the most, or who is in the most dire situation.

“Everybody needs it the most,” Wakeford said. “I don’t know that there is a good way to rank or make it a hierarchy, but there’s also not a good way to give every single tribe the exact same amount of money. Because the way that they’re using the money and the amount of support that they need varies drastically.”

Zepeda also said that most federal funding comes in short-term project grants — the grant the Southern Ute won, for example, lasts only for three years. Zepeda knows that rebuilding a language takes a lot longer than that and requires a lot of resources — not just money, but also manpower, expertise, and technology.

“In the meantime, many universities are very rich,” Zepeda said with a laugh. “They have a responsibility now to work with the tribal community, especially in the area of language recovery or reclamation.”

According to Wakeford, colleges should serve as a “stepping stone” or “building block” from which language-revitalization efforts can continue to grow.

“It is not the main way that the restoration of our Native languages is going to be accomplished,” Wakeford said. “They’re just one of the many spokes that come out of Native-language work.”