NBA legend Reggie Miller on WNBA star’s arrest: ‘I hope for a safe passage back for Brittney’ 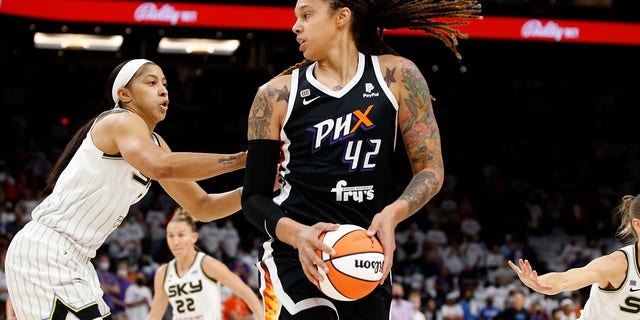 Brittney Griner’s arrest in Russia has sparked fears about her safety and prayers that she will be able to make a safe trip home.

The WNBA star was arrested last month after authorities said a search of her luggage revealed vape cartridges containing oil derived from cannabis. Griner could face up to a decade in prison if she’s convicted.

Basketball Hall of Famer Reggie Miller told Fox News Digital in a recent interview that he was praying that the Phoenix Mercury center can get back to the U.S. safely.

“I hope for a safe passage back for Brittney. Again, you know, not knowing all the particulars, I know it’s not right for them to detain her,” Miller said. “I don’t even think we know where she is, I’m sure the State Department does, but there’s still very little information that’s coming out of Russia right now. That’s what’s a little bit disturbing.”

Brittney Griner #15 of Team United States reacts during the first half of the Women’s Basketball final game between Team United States and Team Japan on day sixteen of the 2020 Tokyo Olympic Games at Saitama Super Arena on Aug. 8, 2021 in Saitama, Japan.
(Kevin C. Cox/Getty Images)

Miller, who teamed up with Wendy’s again for the company’s March Madness campaign and is set to be on the call for some of the men’s basketball games over the next month, told Fox News Digital he only played abroad a few times but never experienced anything Griner is going through.

“I pray for her safe passage back home,” said Miller, whose sister Cheryl is also a Hall of Famer and women’s basketball pioneer. “I think all that we can do from my standpoint and us as Americans is hope for a safe return.”

NBA Legend, Reggie Miller looks on before the NBA 75 Legends Portrait as part of 2022 NBA All Star Weekend on Feb. 20, 2022 at Rocket Mortgage FieldHouse in Cleveland, Ohio
(Jesse D. Garrabrant/NBAE via Getty Images)

Rep. Sheila Jackson Lee, D-Texas, said Tuesday that Griner was among the Americans being held on “false charges.”