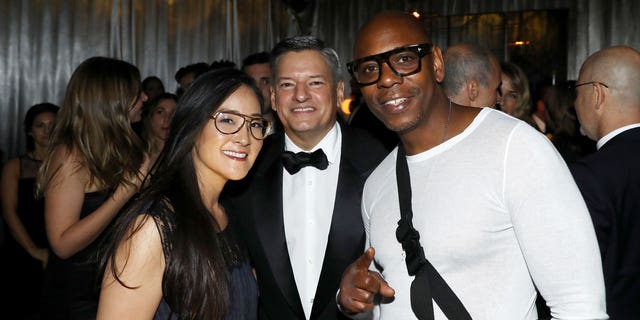 Netflix CEO Ted Sarandos is sticking behind his decision to back Dave Chappelle.

Chappelle, whose comedy special lives on the streaming site, has received backlash over his use of transgender jokes in his set. Netflix employees walked out of the Los Angeles headquarters in protest of “The Closer.”

Sarandos told The New York Times he was surprised by the employees’ reaction, but stood behind his decision to put Chappelle on the platform. He emphasized that comedians can only figure out where the line is by “crossing the line every once in a while.”

“I think it’s very important to the American culture generally to have free expression.”

Ted Sarandos is sticking behind his decision to host Dave Chappelle’s comedy content on Netflix.
(Handout/Getty Images for Netflix)

Sarandos said the decision to keep Chappelle on the platform wasn’t hard and noted it’s good to test your principles.

“It was an opportunity to take somebody, like in Dave’s case, who is, by all measure, the comedian of our generation, the most popular comedian on Netflix for sure. Nobody would say that what he does isn’t thoughtful or smart. You just don’t agree with him.”

Netflix is focused on programming something for everybody, according to Sarandos.

Chappelle has seen backlash over his jokes about transgender people. Most recently, the comedian was attacked on stage while performing as part of the “Netflix Is a Joke” festival.

The suspected attacker, Isaiah Lee, claimed Chappelle’s jokes about transgenderism and homelessness were triggering for him.

The Netflix CEO explained his decision after Chappelle caught backlash over his jokes about transgender people.
(Vivien Killilea/Getty Images for Netflix)

“I identify as bisexual… and I wanted him to know what he said was triggering,” Lee told the New York Post.

“I wanted him to know that next time, he should consider first running his material by people it could affect.”

Lee was carrying a replica gun with a knife blade inside when he allegedly attacked Chappelle during the Hollywood Bowl, police say. He was intercepted by security and suffered a broken arm and two black eyes, according to the New York Post.

A spokesperson for Netflix told Fox News Digital: “We care deeply about the safety of creators, and we strongly defend the right of stand-up comedians to perform on stage without fear of violence.”

Lee is being held on $30,000 bail. L.A. City Attorney Mike Feuer charged Lee with four misdemeanor counts: battery, possession of a weapon with intent to assault, unauthorized access to the stage area during a performance, and commission of an act that delays the event or interferes with the performer.

Chappelle was recently attacked by an audience member while performing at the Hollywood Bowl.

“My office takes protecting public safety extremely seriously, and we are going to vigorously prosecute this case,” Feuer said in a video.

Lee has also been charged with attempted murder in an unrelated case.