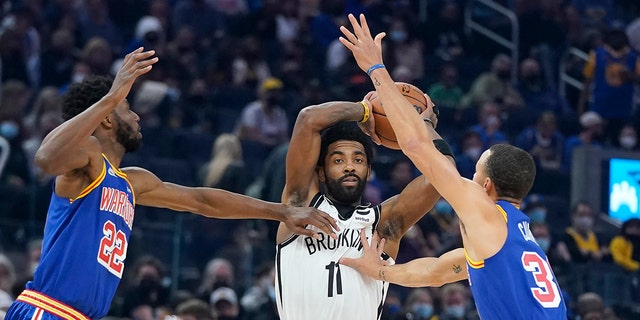 The Brooklyn Nets and Philadelphia 76ers will square off for the first time on Thursday since the blockbuster trade involving James Harden and Ben Simmons.

Nets star Kyrie Irving recently spoke out about the trade, saying he’s at peace with his former teammate’s decision to request a trade from Brooklyn.

“If that’s what James wanted, then I respect his decision, and that’s just what it is. I wish him nothing but peace and love. We have a great friendship, but it didn’t work out,” Irving said following his 50-point performance over the Charlotte Hornets, via ESPN.com.

The Philadelphia 76ers’ James Harden (1) calls out to a teammate during the first half against the New York Knicks Feb. 27, 2022, in New York.
(AP Photo/Frank Franklin II)

Prior to the Nets trading Harden, he reportedly made his displeasure with Irving clear. Irving could only play in road games this season because he was unvaccinated. Irving said he wished Harden gave a specific reason for why he wanted to leave the Nets,

“I wish things could have been communicated better for all of us as men. But hey, no hard feelings here with me or anyone else,” Irving said.

Since the Harden trade, the Nets have a 4-7 record in 11 games, and they are the eighth seed in the Eastern Conference. The Sixers are 5-0 with Harden in the lineup and 8-2 overall since the trade.

Simmons reportedly won’t play in Thursday’s game against the 76ers.