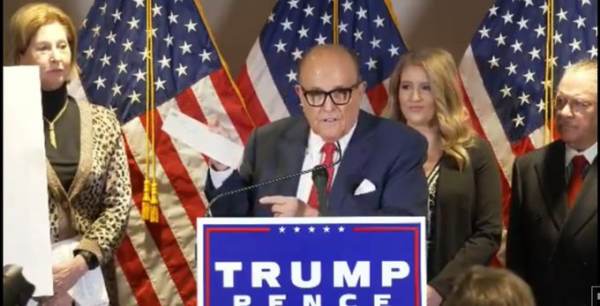 
Far-left activists including David Brock, the founder of Media Matters and former Democratic Senate Majority leader Tom Daschle are targeting Trump attorneys in an attempt to deter conservatives from challenging any future election fraud schemes by the left.

We’ve reported on Media Matters many times in the past 18 years.  They worked with Facebook to remove conservative and pro-Trump groups from the platform.  They’ve attempted to remove FOX News from cable networks.  Media Matters bragged about getting FOX News Trish Regan taken off the air.  They were behind the cancellation of BardsFest in St Louis, a Christian group that was gathering to discuss the stolen 2020 Election.  They were behind the effort to remove “The Donald” Reddit page.  They mission is to remove conservative voices from the American media landscape.

And they have had great success.

The Gateway Pundit, FOX News and its hosts, and any conservative who loves America and its founding principles are targets of this fascist group.

Now David Brock from Media Matters is going after attorneys who helped President Trump after the 2020 Election was stolen from him.

The new organization is named the 65 Project.

A dark money group with ties to Democratic Party heavyweights will spend millions this year to expose and try to disbar more than 100 lawyers who worked on Donald Trump’s post-election lawsuits, people involved with the effort tell Axios.

Why it matters: The 65 Project plans to begin filing complaints this week and will air ads in battleground states. It hopes to deter right-wing legal talent from signing on to any future GOP efforts to overturn elections — including the midterms or 2024.

Details: David Brock, who founded Media Matters for America and the super PAC American Bridge 21st Century and is a Hillary Clinton ally and prolific fundraiser for Democrats, is advising the group.

The group wants to make it clear that any attorney who stands in their way will be a target of the fascist regime.

They can’t win in the arena of ideas (ex: gas prices) so they try to destroy their opposition.