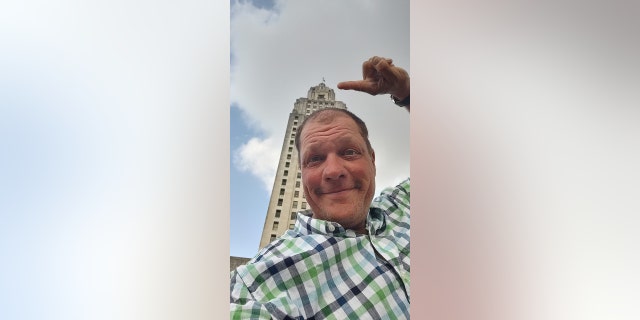 A man from Syracuse, New York, who is cycling to all 50 U.S. state capitals in one year has revealed the kindness he experienced in Louisiana.

He also took a slight detour from his capital-to-capital route to visit New Orleans for Mardi Gras and meet his half-sister for the first time.

Bob Barnes, 52, has been sharing his experiences and insights with Fox News Digital along his trip. On Feb. 22, he reached his 28th stop: Baton Rouge, Louisiana.

After his visit to Baton Rouge — and later, New Orleans — Barnes reflected on The Pelican State, a place that he said “felt like a vacation” every day.

Barnes arrived in Louisiana on Feb. 18. He told Fox News Digital that Louisianans had recognized him from media interviews.

During Barnes’ stop for a quick bite at Burger King, the cashier didn’t charge Barnes for his French fries and even gave him extra. Once Barnes was back on the road, a couple pulled over in their car to chat with Barnes because they recognized him.

Though Barnes told Fox News Digital that many of the state capitol buildings he’s visited are similar, Baton Rouge stood out for its height, with 34 floors.
(Bob Barnes)

“I did get to go up to the 27th floor, the observatory,” Barnes added. “Got to see all of Baton Rouge. It was pretty cool. So it’s very unique in that regard.”
(Bob Barnes)

Later that same night, Barnes said he met up with one of his followers on his “Bibbery Travels” Facebook page, who treated Barnes to dinner and a room at a nearby hotel.

Barnes, an avid camper, said he’s typically against the idea of staying in hotels except during severe weather — but he ended up accepting the offer.

“I was just treated great all day long,” Barnes said.

Kindness “seems to be the theme in the United States, from what I see.”

The kindnesses continued the next day, Barnes said. Someone else noticed Barnes and pulled his car over to offer Barnes some “snacks and encouragement.”

“It is kind of weird being recognized,” he said. “I’m in Louisiana. I’m from New York.”

Barnes said the thing he kept thinking about Louisiana was that everyone was so kind. “I feel like I say that so often, it’s getting old,” Barnes told Fox News Digital.

He added that kindness “seems to be the theme in the United States, from what I see.”

Barnes said he would describe Louisianians as “insightful.”

“They’re just very insightful and helpful and accurate with their information,” Barnes said.

‘You can’t make this stuff up’

Since starting his journey across the country, Barnes said he discovered through social media that he has a half-sister whom he’d never met before.

His sister, Rose, lives in Louisiana with her husband and three kids, so Barnes decided to drop by for a visit on his way to New Orleans.

Barnes said he recently discovered he has a half-sister he’d never met before. Barnes met Rose for the first time while traveling through Louisiana.
(Bob Barnes)

When Barnes visited his sister Rose, they had a Mardi Gras king cake — and he got the plastic baby, which means he has to bring the king cake next year.
(Bob Barnes)

“The best thing about that was we look alike and that was just — it was strange, but cool,” Barnes said. “It was like one of those things that you read about … You can’t make this stuff up.”

Barnes had dinner with Rose and her family and even stayed the night. “We got along, everything was great,” Barnes said. “It was awesome.”

Barnes said he “absolutely” plans to keep in touch with Rose. Plus, since he got the plastic baby in the Mardi Gras king cake, he has to be back next year so he can bring the cake, per tradition.

Barnes also had a few interactions with police officers in Louisiana.

Barnes said that typically, as he cycled through Louisiana, he was on four-lane highways with enough of a shoulder for him to stay safe.

Whenever he would get to a town, the shoulder would turn into a curb, which meant he had to ride in the lane with cars, “which could be unsafe if you don’t do it right,” Barnes said.

When Barnes first got into Louisiana from Arkansas, he said he noticed the difference in the states almost immediately.
(Bob Barnes)

When asked if anything stood out to him about Louisiana, Barnes said the thing he kept thinking about was “everybody being so kind.”
(Bob Barnes)

“The air smells different and it gets warmer and you just feel like you’re heading South and you’re in Louisiana,” Barnes said of when he first arrived in the state.
(Bob Barnes)

In Gilbert, Louisiana, Barnes said he saw a police officer parked by the road who ended up escorting him through town with his lights on. “That was just a nice gesture,” Barnes added.

Later that night, Barnes was camping by the side of the road when another police officer showed up to ask what he was doing. When Barnes explained, the officer let him stay for the night.

“That was no big deal,” Barnes said.

Though Barnes told Fox News Digital that many of the state capitol buildings he’s visited are similar, Baton Rouge stood out for him.

“This capitol is different from all the other ones,” Barnes said. “In the biggest way, it is the tallest capitol out of all of them, by far. It’s 34 floors.”

“I did get to go up to the 27th floor, the observatory,” Barnes added. “Got to see all of Baton Rouge. It was pretty cool. So it’s very unique in that regard.”

Barnes also met up with a couple of members of the Baton Rouge Bike Club, who gave Barnes a cycling tour of the city, treated him to his celebratory beer and gave him tips about where he could spend the night safely.

“It was like one of those things that you read about … You can’t make this stuff up.”

“There’s nothing better than being able to talk shop with people that know what you’re talking about and have been through the same experiences,” Barnes said.

“So that was great,” he added. “That was just another great day.”

“I didn’t want to leave,” Barnes said about Mardi Gras in New Orleans. “I had to force myself out of there the next morning. I could’ve stayed.”
(Bob Barnes)

Barnes said the thing about Louisiana that stuck out to him the most was the delicious food.

“My [social media] followers tell me I should go do these things more often, so I’m trying to be more active about trying the local cuisine,” he said.

While he was in Louisiana, Barnes said he tried a shrimp po’ boy, which he said was “absolutely delicious.”
(Bob Barnes)

“Mardi Gras is just an experience … It’s a big party.”

Though he had some difficulty, Barnes was finally able to find someone to watch his bicycle and gear in the city while he went to visit Bourbon Street.

While he was there, he had a classic Hurricane and “probably one too many beers” while he witnessed the celebrations.

While Barnes was in New Orleans for Mardi Gras, he had a classic Hurricane and “probably one too many beers” while he watched the celebrations, he said.
(Bob Barnes)

“It was fascinating just to see everybody,” Barnes said of Mardi Gras. “There’s a lot of character down here. Everybody’s in costume… everybody’s in a good mood. It’s just a good vibe.”
(Courtesy of Bob Barnes)

“There’s a lot of character down here,” Barnes said. “Everybody’s in costume. Everybody’s in a good mood. It’s just a good vibe.”

“Mardi Gras is just an experience,” he added. “It’s a big party, that’s all it is — one huge party, all the way around.”

“I didn’t want to leave,” Barnes continued, adding that he set up camp in a church parking lot. “I had to force myself out of there the next morning. I could’ve stayed.”

As he cycled through Louisiana, Barnes spent a lot of time riding along the Mississippi River and crossed into Mississippi for about 40 miles, he said.

Unfortunately, the parts of Mississippi that Barnes rode through didn’t have enough of a shoulder for him to ride on, so he had to ride in the lane with cars.

When he spoke with Fox News Digital last week, Barnes said he anticipated there might be “tough” roads ahead on his way to capital number 29 of Jackson.