NYC resident stuck in Ukraine as war with Russia rages: We are ‘losing hope’ 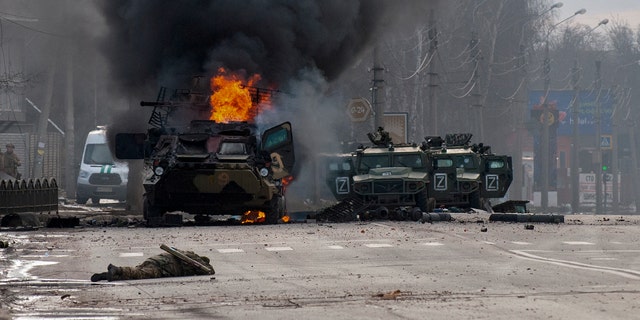 A New York City resident, who left the Soviet Union decades ago, is stuck in Ukraine amid the invasion as Russian forces double down on their efforts to take over major cities.

Valentina Bajada and her partner Heidi Russell joined “Fox & Friends First” to discuss what it is like on the ground in Kyiv as Russian forces attempt to take over the country.

“People in Ukraine [are] losing hope,” Bajada told co-host Todd Piro. “They know that Putin will not let go. He will do anything to conquer this country, take its people, take control, and if he cannot succeed through war, he has nuclear weapons, which he will not hesitate to use.”

“Every other person in Ukraine know that Putin will not let it go easy,” she continued.

PUTIN PAINTED INTO A CORNER AS WORLD LEADERS, MAJOR COMPANIES AND EVEN SOME OF HIS PEOPLE TURN AGAINST HIM

Despite the continued attacks, peace talks are taking place in Belarus between both Russian and Ukrainian officials.

“Every day is getting worse,” Bajada said. “Right now, today, maybe it’s quiet, but Putin and his army and his aggression, collectively coming into Ukraine right now.

“In just a matter of days things will start again, and people know that,” she continued. “Elderly know that. The ones that lived through war know that. So we ask for help to save us, to help us because Ukraine today in grave danger.”

Russell also stressed the gravity of the situation, expressing her angst for Bajada to return home.

“It’s been incredibly hard… just sitting here in New York City wanting my loved one to come home and knowing that there’s so many other people struggling over there,” Russell said.

The United Nations has warned the ongoing invasion is likely to fuel the humanitarian crisis as well over 120,000 Ukrainians have fled the country seeking refuge in neighboring nations.