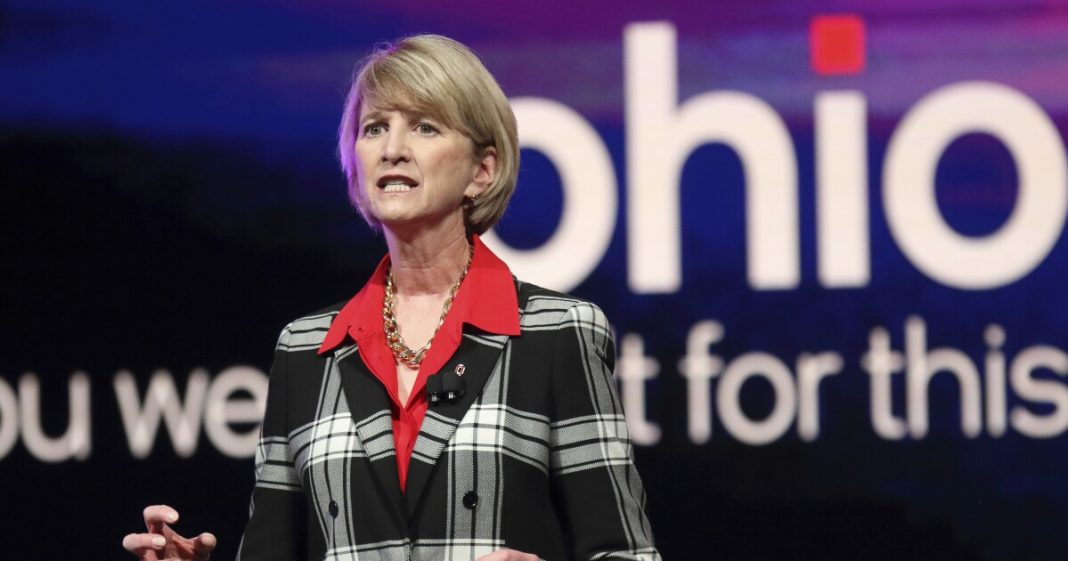 
In November 2021, President Kristina M. Johnson of Ohio State University announced a groundbreaking plan to help all undergraduates complete a degree at the university without taking out any student loans.

On Monday evening, Johnson, who has been president since July 2020, made another big announcement, confirming news accounts that she would be leaving her post just a year after her official investiture. “I have made the difficult decision to step down as president following commencement at the end of the academic year,” Johnson said in a news release.

In her announcement, Johnson offered no reason for stepping down less than three years into her five-year contract. In an interview on Tuesday with The Chronicle, she reiterated that it was “a difficult decision” and she remains committed to her plans and the university through the end of the academic year.

“I can’t stress enough how proud I am of faculty, students and all of Buckeye Nation,” Johnson said.

Johnson is the just the latest of several high-profile presidents to step down from leadership at major research universities over the past two years, as the pandemic and increased financial and political pressures took their toll on institutions. But her resignation is notable because of the extremely short tenure and because of the scope and number of initiatives that will remain in their infancy when she leaves.

The plan to eliminate undergraduate student loans at the university, with increased financial aid and student work opportunities, was being piloted this year for just 125 students. Johnson had planned for the program to take a decade to be fully operational, and it required raising nearly a billion dollars and arranging for thousands of jobs and paid internships. During her interview, Johnson noted that the university had already raised more than $120 million for the plan and attracted some 5,000 new donors.

Johnson had also planned to hire an additional 350 faculty members over the next decade and double the university’s research expenditures, which last year surpassed $1.2 billion. Research expenditures have increased by double-digit percentages during her tenure, Johnson said.

But what happens to those plans and many others is now in doubt — new presidents like to make their own plans and pursue their own legacies.

“Ideally she will be here through the end of the spring semester and we will forge ahead,” said Caroline Clark, a professor in the department of teaching and learning at Ohio State and a member of the University Senate.

Pranav Jani, an associate professor of English and president of the university’s AAUP chapter, said Johnson’s plans appeared to be popular with the board, but her efforts to diversify the faculty could come under criticism from state lawmakers who have sought to undermine the university’s efforts at racial equity and inclusion. Earlier this year, Ohio legislators considered a bill that would have restricted how faculty members instruct students on “divisive concepts” such as race and racism.

Sondra N. Barringer, an assistant professor of higher education policy and leadership at Southern Methodist University, said whether the university continues to pursue those plans will depend largely on how far toward the goal they are before a new president arrives. “If new programs aren’t institutionalized within the university, then they’re at risk of fading away,” she said.

At the moment, the bigger uncertainty is over Johnson’s decision to resign. Faculty members who spoke to The Chronicle said there had been no indication that Johnson was considering leaving and there was no apparent tension with the Board of Trustees.

Gary R. Heminger, a member of Ohio State’s Board of Trustees, said he is “a big fan” of Johnson and was disappointed that she announced her resignation just halfway through a five-year contract. “Sometimes academia just marches to a different drum,” Heminger said, declining to provide any explanation for Johnson’s departure.

Mary Sue Coleman, former president of the University of Michigan and a mentor to Johnson, said that differences with the board had come up in her discussions with Johnson: “I had some sense about the fact that visions diverged between the board and her vision.”

Johnson downplayed any differences she may have had with board members. “I think back on all the things we accomplished,” she said, “you can’t do that without a shared vision.”