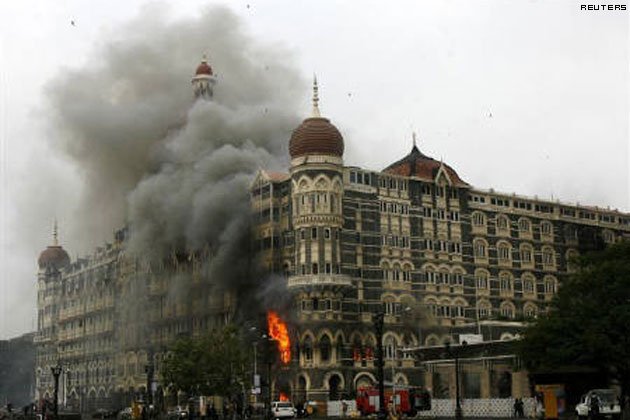 
In November 2008, 10 Pakistani Islamists carried out a series of twelve coordinated shooting and bombing attacks lasting four days across Mumbai.

The attacks were conducted with the support of Pakistan Government’s intelligence agency ISI.

174 people were killed in the raids across Mumbai, including the 10 Islamist attackers.

The terrorists targeted civilians at numerous sites in the southern part of Mumbai, including the Chhatrapati Shivaji railway station, the popular Leopold Café, two hospitals, and a theatre.

The bloody terrorist attack lasted two days at the Mumbai Hotel.  Islamists hunted down tourists and infidels in the hotel and murdered them one by one. The Mumbai terrorists leaders cheered and praised Allah as the infidel hostages at the Taj Hotel were lined up and shot dead.

The Mumbai terrorists also sexually humiliated their victims at the Taj before killing them.

In 2016 Pakistani Islamist Muhammad Ghani Usman was captured in Austria after entering Europe as a refugee. Muhammad Ghani Usman (left) and Adel Haddadi were arrested at a refugee centre in Austria and are believed to be linked to terror groups and the suicide bombers who blew themselves up outside the Stade de France in Paris in November. (Daily Mail)

Muhammad Usman was also behind the deadly Mumbai terrorist attacks in 2008.

Sajid Mir, the alleged mastermind behind the Mumbai Hotel terrorist attack was reportedly captured this week in Pakistan.

For years Pakistani authorities alleged that Sajid Mir was dead.

Then this week he ends up very much alive. Pakistan has reportedly arrested Sajid Mir, the alleged mastermind of the 2008 Mumbai terror attacks, and sentenced to eight years in prison, according to Hindustan Times. Mir has been on FBI’s ‘most wanted’ list even since before the 26/11 attack. Mir is also the alleged brain behind the Denmark bombing operation codenamed ‘Micky Mouse’, referring to the publishing of cartoons of the Prophet in the Danish newspaper Jyllands Posten.

Interestingly, the news comes after Pakistan spent years denying Mir’s presence and even claimed that he was dead.

Who is Sajid Mir

Mir served as a “handler” for David Headley and others who were directed to carry out actions relating to planning, preparing for, and carrying out terrorist attacks on behalf of the LeT.

Besides, Mir is responsible for attacks in about half a dozen other countries including the US, Australia, France, Denmark and the UK. The US State Department has even offered a reward of USD 5 million for information leading to the arrest and conviction of the most-wanted terrorist.