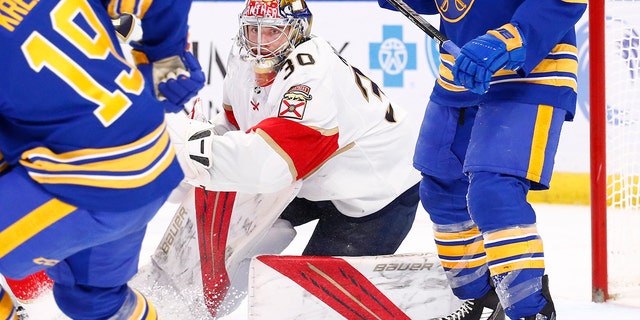 Aleksander Barkov had a goal and two assists, and the Florida Panthers won their third straight game, beating the Buffalo Sabres 6-1 on Monday night.

“We got to the second, we got our legs going, and that’s when we play our best,” Duclair said. “We kind of saw that when the boys are moving around, passing the puck pretty well.”

Mason Marchment had three assists, and Sam Reinhart one in his first game back in Buffalo following an offseason trade.

Former Sabre Brandon Montour opened the scoring for the Panthers, who lead the NHL in averaging more than four goals per game. They have outscored opponents 15-3 during their win streak.

Spencer Knight made 28 saves to win his first Panthers start since Feb. 1 after getting called up from the minors.

Florida Panthers goaltender Spencer Knight (30) looks for the puck in traffic during the first period of an NHL hockey game against the Buffalo Sabres, Monday, March 7, 2022, in Buffalo, N.Y.
(AP Photo/Jeffrey T. Barnes)

“It’s good to see him back,” Duclair said. “He’s obviously a very skilled and talented goalie, and we’re just lucky to have him.”

Florida opened a back-to-back trip with its fourth consecutive road victory and eighth in 10 games away from home. The Panthers (38-13-5) moved ahead of Tampa Bay (37-12-6) in the Atlantic Division with 81 points and an additional game played.

John Hayden tipped in Rasmus Asplund’s shot for Buffalo’s lone goal, ending Knight’s bid for his first NHL shutout with 6:15 left in the third period. Craig Anderson stopped 25 shots for the Sabres, who lost their second in a row following a two-game streak and dropped to 2-8-0 in their last 10 games.

“I’ve already looked at the calendar and see that we play them two more times,” Sabres coach Don Granato said. “I’ll remind our guys of this game, and it’s a measuring stick for us.”

The Panthers scored their 10th power-play goal in eight games, and Jonathan Huberdeau recorded his NHL-best 59th assist when he set up Barkov for his team-leading 26th goal at 6:50 of the third period.

“We did enough,” Panthers interim coach Andrew Brunette said. “I think we can do a little more. I thought we responded at times when we needed to respond. We put signs of a really good team, that maybe when you’re not at your best, but you find moments in the game to take control.”

Florida built a 5-0 lead midway through the second period by scoring four times in a span of 6:48.

The surge started 5:54 into the period when Acciari scored his first in four games since returning from a preseason shoulder injury. Barkov fed Duclair for his 22nd on a power play 1:45 later. After four scoreless minutes, Verhaeghe netted his 17th and Hornqvist his ninth 1:03 apart.

Barkov’s pass from behind the net set up Montour in the slot for the Panthers’ league-best 73rd first-period goal 5:22 into the game.

The Panthers out-hot their opponent for the 13th consecutive game despite the Sabres having an 11-3 advantage in the first period.

“We didn’t like our first at all,” Duclair said. “We just talked amongst ourselves in the locker room and said we’ve got to be way better.”

Former Sabres Reinhart and Montour were in the starting lineup and received an ovation from the crowd after being shown on the video scoreboard at a stoppage in play during the first period. Scratched goalie Jonas Johansson also was acknowledged in the video.

The Sabres’ leading scorer last season, Reinhart returned to Buffalo for the first time since getting traded to the Panthers in July for a 2022 first-round pick. The second overall pick in the 2014 draft appeared in 454 games over seven seasons with the Sabres.

“It’s nice coming back,” Reinhart said before the game. “It seems like a long time ago, especially at this time of year when you’ve played so many games with a new team.”

It was also the first time back in Buffalo for Montour, who was traded to the Panthers last April after playing 112 games with the Sabres.

ONE FOR THE AGES

The goaltender matchup between the 20-year-old Knight and 40-year-old Anderson was the largest age spread in an NHL game since 2007.

Anderson appeared in 48 games for the Panthers from 2007-09. The NHL’s oldest goalie is one victory away from 300 for his career.

Panthers: Rookie F Anton Lundell went to the dressing room in the first period with a lower-body injury and did not return after being knocked down by Buffalo’s Mattias Samuelsson. “I think it’s not serious, but we’ll see,” Brunette said. … F Ryan Lomberg (undisclosed injury) is expected “back pretty soon” after being placed on injured reserve Sunday, according to Brunette.

Sabres: F Alex Tuch remained in the lineup after being listed as a game-time decision following his head-first collision with the goal post in the third period of Sunday’s 3-0 loss to the Los Angeles Kings. Tuch said Monday that he was in pain after the game, but medical tests showed no structural damage to his neck or signs of a concussion.

Panthers: At Pittsburgh on Tuesday.

Sabres: Host Vegas on Thursday in first meeting with Jack Eichel since Buffalo traded the former captain to the Golden Knights in December.