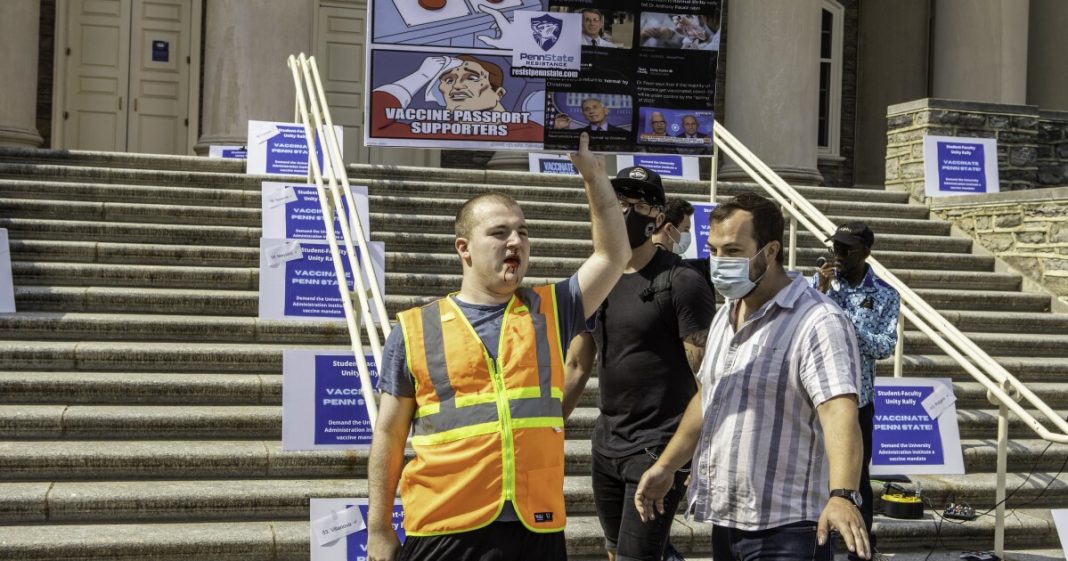 
After months of controversy, Pennsylvania State University’s president has determined that a tenure-track professor will not be fired for his involvement in a “physical altercation” with a student at a pro-vaccine rally on the main campus last August.

Oliver Baker, an assistant professor in the African American studies and English departments, had been accused by the university of “grave misconduct,” an offense that could lead to termination, after he clashed with Avi Rachlin, a counterprotester at the rally. Baker told The Chronicle in March that he had been trying to de-escalate the tension Rachlin was causing with his anti-vaccine signs, shouting, and cursing. The altercation, which involved two other people, left Rachlin, a self-described “libertarian anarcho capitalist,” with a bloody nose.

Baker initially faced charges of simple assault, disorderly conduct, and harassment. The first two charges were dropped, and he was found not guilty of the third in court. But Baker still faced potential termination from the university.

Neeli Bendapudi, who took office in May as Penn State’s president, wrote in a letter to the University Faculty Senate on Monday that while Baker’s actions at the rally were “clearly misconduct,” officials did not have “clear and compelling evidence” that they warranted termination and a revocation of tenure.

Reached via email by The Chronicle, Rachlin said he wondered what the Standing Joint Committee on Tenure, the faculty committee responsible for evaluating Baker’s case, had ultimately recommended.

Neither Barron nor Baker immediately responded to requests for comment.

Bendapudi’s letter was obtained by The Chronicle and verified by a Penn State spokesperson, who declined to comment beyond the contents of the letter. Bendapudi issued the letter in the interest of providing “additional context” on an issue that has garnered national attention, she wrote.

In it, Bendapudi calls Baker “an active antagonist with a student in a free-speech zone.”

“The consequences are a confidential personnel matter,” Bendapudi wrote.

She goes on to say that she has concerns with the policy and process in place to assess potential tenure revocation for Penn State faculty, and asked the chair of the University Faculty Senate to “begin a dialogue” to build on the university’s policy on faculty accountability.

“The accountability policy for faculty might be thought of as a progressive discipline system akin to that which exists for our staff and indeed in workplaces across the world,” she said.