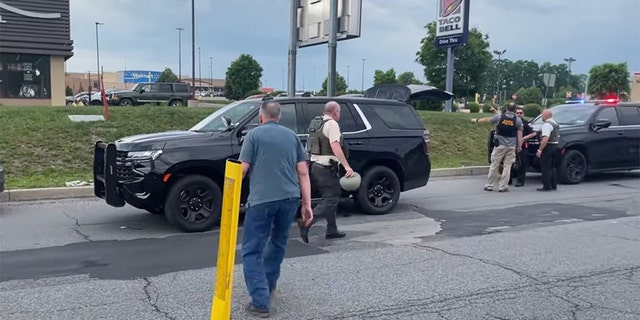 Police in Pittston Township, Pennsylvania are responding to a shooting at a nail salon near a Walmart Supercenter, according to police and local reports.

At least one person was shot in the vicinity of the store, which is off State Route 315. Pennsylvania State Police said several shots were fired and described the shooting as an “attempted homicide.” Authorities are actively looking for the shooter.

Police responding to a shooting near a Walmart Supercenter in Pittston, Pennsylvania.
(WOLF-TV)

Officials described the suspect as a Black man with dreadlocks, about 5’5″ to 5’8″ with a skinny build, wearing a blue shirt with white lettering.

Witnesses told WILK the shooting occurred in the vicinity of Envy Nails near the Walmart. The nail salon would not comment on the situation when reached by Fox News. A witness told The Times Leader that they saw an injured person being taken from a nail salon.

Traffic in the area was shut down while authorities responded to the scene. Pennsylvania State Police said SR 315 was closed to all traffic and told drivers to avoid the area.

No further details were released.

Pittston Township is a small town in northeastern Pennsylvania, about 130 miles from New York City.

The shooting comes after last week’s mass shooting in Uvalde, Texas, where an 18-year-old gunman shot and killed 21 people – including 19 children. That shooting followed another shooting incident in Buffalo, New York, where another 18-year-old gunman killed 10 people and wounded three others in a grocery store. The Pittston shooting also follows a shooting at a Dallas nail salon in mid-May.

This is a developing story. Check back for updates.

Previous articleEXCLUSIVE: The Majority of the 51 Intel Experts Who Claimed the Hunter Biden Laptop Was Russian Disinformation Have Connections to George Bush Sr.
Next articleWhy Marilyn Monroe Is Still a Fashion Icon – E! Online
- Advertisement -