Professors Are Being Asked to Accommodate Students. That’s Not the Same Ask for Everyone. 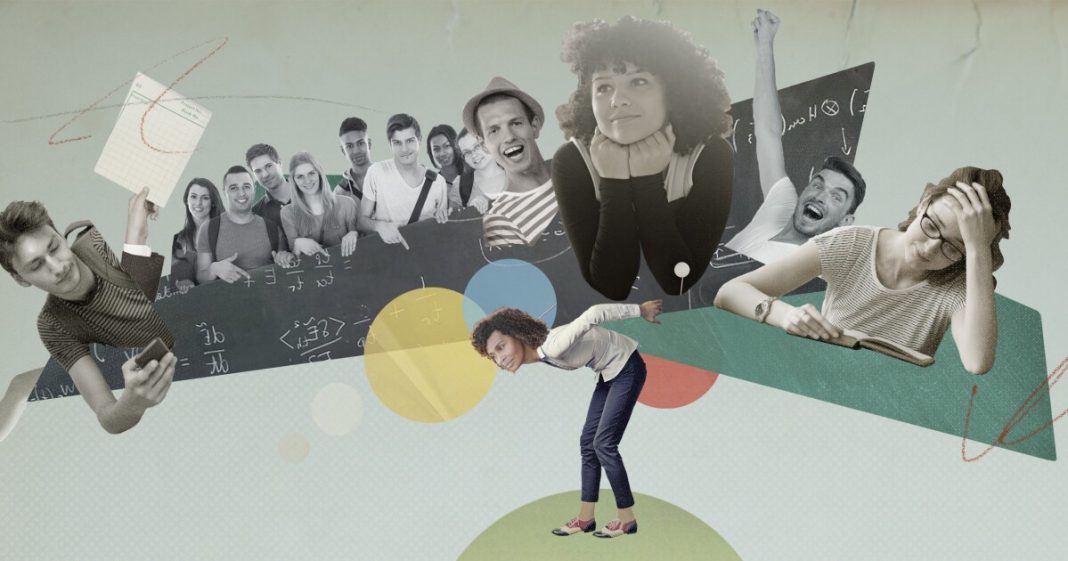 
s students have confronted the many challenges of the past two years, they’ve leaned on their professors for support. They’ve asked for accommodations, extensions, and flexibility. They’ve sought help coping with personal issues, including strains on their mental health.

It adds up to a lot of extra work for instructors. But that work has not been distributed evenly. Professors who are white, cisgender men performed less emotional labor — that is, managing students’ feelings and their own — in the early stretch of pandemic teaching than did their colleagues, according to a recent study based on faculty surveys from three colleges.

That uneven burden is driven by the different demands that students place on professors of different identities, according to the paper “Teaching College in the Time of Covid-19: Gender and Race Differences in Faculty Emotional Labor,” published in the journal Sex Roles. Instructors who are white, cisgender men, it says, have a “status shield” that protects them from students’ requests.

Cisgender men and women of color, white cisgender women, and gender-nonconforming professors did not have that protection, it found.

The study has limitations: Its sample is 182 professors at three small, private liberal-arts colleges. But its findings are in keeping with the literature on how instructors’ identities — and, especially, students’ perceptions of them — affect the work of teaching. With faculties still dominated by white scholars — and, at the senior level, men — students don’t grant the same authority to instructors who don’t match the classic portrait of “professor.” That makes teaching harder.

This challenge isn’t new. But at a time when many professors are working harder than ever, without any clear payoff, and as many seek out teaching advice only to find it might not account for their circumstances, the impact of instructor identity is getting more attention. Some faculty developers make a point of mentioning it in their presentations. It surfaces in periodic Twitter discussions about teaching decisions like whether to have students use professors’ first names. And it’s the topic of a forthcoming book in a well-regarded series on teaching in higher ed from West Virginia University Press.

“Part of it is that people are finally starting to open their ears to hear those of us who’ve been saying this for years — like, decades,” says Chavella Pittman, a professor of sociology at Dominican University who contributed a chapter about the experience of women of color to the West Virginia University Press book. She is also working on a book for the same press meant to empower women faculty of color to teach both authentically and strategically.

The extra emotional labor put in by professors who don’t have that status shield has real consequences. Research shows that students hold these instructors to different standards and judge them more harshly in course evaluations. Since on many campuses those evaluations, despite their documented biases and other flaws, remain the primary form of evaluating teaching, students’ uneven expectations can damage the careers of professors who are women, people of color, and, especially, both. Meanwhile, the time and energy professors spend on emotional labor cannot be used to perform other parts of their jobs, including the research their careers almost always rest on.

“Less research productivity, negative student evaluations, and a casual narrative of a faculty member with marginalized status as less than a good teacher are the main ingredients in the recipe for failed retention, tenure, and promotion,” Pittman says. “And colleges keep baking that up and serving that to marginalized faculty.”

or several years, both Jennifer Sims and Cyndi Kernahan taught students at the University of Wisconsin at River Falls about race. Although they were in different departments, Sims in sociology and Kernahan in psychology, their classes were quite similar, Sims says, because Sims focused on social psychology.

But students, the instructors noticed, responded quite differently to Sims, who is Black, than they did to Kernahan, who is white. Some of that might have been about age, or job title — Sims, now an assistant professor at the University of Alabama at Huntsville, was an adjunct at the time, and Kernahan, a full professor who also wore an administrative hat, is older. But the main factor, both professors concluded, was race.

When the instructors taught about implicit bias, for example, Kernahan’s students described finding it eye-opening. When Sims covered similar material, she got a lot more pushback, with some students saying she was accusing them of racism.

Students, Sims says, have an expectation that “people who look certain ways are going to be in certain positions. And when that is disrupted, and you have someone who looks like they should be the lunch lady, but is in front of the classroom telling you that the thing that you’ve been thinking your entire life is actually empirically inaccurate, then they’re going to feel some sorta way about it.”

Perhaps it’s unsurprising that a Black woman teaching about race got a different response than did a white woman covering similar content. But that class is not the only context in which Sims has gotten a different reaction doing the same things as her colleagues.

To take one example, Sims recalls a River Falls student objecting to her policy of deducting 10 points for each day a paper was late — a policy that was not uncommon in the days before Covid-19. The student, who had lost 30 points, complained to Sims’s department chair. The chair pointed out that the student had taken his class, where the policy was to dock 50 points the first day, and not complained then.

“The key issue is the stereotypes associated with a particular identity,” says Yolanda Flores Niemann, one of the editors of Presumed Incompetent: The Intersections of Race and Class for Women in Academia. For example, a stereotype of women is “we’re supposed to be nurturing,” says Niemann, a retired professor of psychology at the University of North Texas who consults on faculty support. So when a professor who’s a woman gives lots of assignments and difficult exams, Niemann says, “she will be attacked for being mean, for not caring” because those actions are in tension with the way she’s expected to behave. If she is a person of color she faces yet another level of attack based on her intersectional identity, Niemann says.

Presumed Incompetent came out a decade ago; a follow-up collection, Presumed Incompetent II, was published in 2020. Even so, much of the common advice about how to teach well — and many of the studies underpinning that advice — ignores the uneven results professors will get because of the way students perceive them.

Molly A. Metz has been thinking about the research side of this lately. Metz, an assistant teaching professor of psychology at the University of Toronto, recently worked with a college senior, Reina Trujillo-Stryzak, who wrote her undergraduate thesis about how professors can foster lifelong learning in their students. The paper uses self-determination theory, which focuses on the quality of student motivation through the satisfaction of their three basic psychological needs: autonomy, competence, and relatedness, Trujillo-Stryzak says.

Early on in the project, Trujillo-Stryzak and Metz discussed limitations of some of the studies they were drawing on. They decided to eliminate one recommendation about professors being energetic because they found it ableist, offering a limited view of what being energetic might look like. But even the teaching practices Trujillo-Stryzak did include come with a caveat. A section of the paper lays this out: “[W]e would like to emphasize,” Trujillo-Stryzak writes, “that our table of teaching behaviours will not be applicable in all contexts. It is meant to act as a ‘menu’ for professors to pick from based on what they see as feasible in their courses.”

There’s a need, she adds, for scholarship on teaching to address this more explicitly. “Future research must investigate the influence of racialized and gendered perspectives of teaching on students’ need satisfaction and learning internalization. It is possible their degree of satisfaction is conditional with the instructor’s gender and race.”

nstructor identity may just be starting to receive broad attention. But there are, of course, experts who’ve long been advising individual professors on how to navigate it.

Niemann encourages professors facing stereotypes to present themselves professionally in the classroom. Professionalism is hard to find fault with. It’s also wise — though difficult — not to read what students might be saying about you on social media, she says.

Because student evaluations of teaching are biased, Niemann encourages professors to create a teaching portfolio and document all the evidence of their teaching success they can.

It can also help, Niemann says, to discuss identity and bias with students head on. A professor who looks young might mention this and talk about it with the class. Niemann used to ask her students, “How many of you have ever had a Mexican American professor before?” It was never very many. Niemann would talk about her heritage and background to let students know where she was coming from. And she’d emphasize: “We all have our lived lenses.”

Talking about stereotypes can chip away at their power, Niemann says. “It kind of pulls the rug out from under people,” she says. Professors can open up a discussion — or, if it’s more comfortable, have students write any questions or concerns anonymously. The professor can then summarize and respond to questions later on.

It’s good that colleges are bringing in more diverse faculty members, but those professors must be supported equitably, says Tazin Daniels, an assistant director of the Center for Research on Learning and Teaching at the University of Michigan. That means providing training for faculty developers, she says, and having a diverse staff of them, too. Well-trained faculty developers, Daniels says, can help individual professors think through the ways their identities play into their teaching. She has herself written some advice on that topic for faculty members in STEM.

But there’s more that teaching centers can do, Daniels says. That might mean creating learning communities and affinity groups for professors, for example. “But it also means that if we are the ones in these relationships with department chairs, deans, directors, provosts,” Daniels says, “we need to use some of our political pull” to point out systemic issues, like faculty-retention rates — and what might be driving them.

At a broader level, colleges need to reckon with the biased nature of student course evaluations. Teaching centers can help, there, too, Pittman, the Dominican University professor, says, by training departments in how to interpret them.

Another idea? Follow the evidence on how to evaluate teaching, rather than leaning so hard on one problematic measure. Not only would that be better for instructors without that status shield, it would benefit everyone who makes an effort to teach well. Oh — and their students, too.