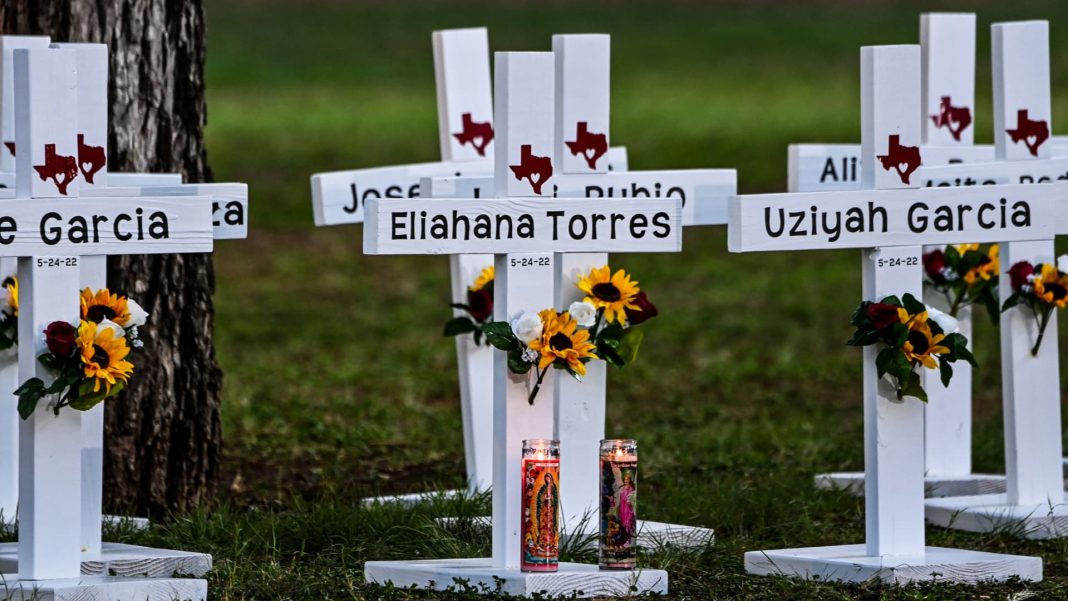 Rep. Joaquin Castro (D-TX) speaks at a press conference on immigration on Capitol Hill on November 18, 2021 in Washington, DC.

Texas Democratic Rep. Joaquin Castro on Thursday asked the FBI to investigate the timeline of the Uvalde elementary school massacre and the police response to it as controversy grew over how law enforcement officials responded to the scene.

“The people of Uvalde, of Texas, and of the nation deserve an accurate account of what transpired,” Castro wrote FBI Director Christopher Wray. “State officials have provided conflicting accounts that are at odds with those provided by witnesses.”

“Your agency must ensure that the American people have a complete and comprehensive account of how this tragedy occurred,” wrote Castro, who represents a district encompassing parts of San Antonio, less than 90 miles from Uvalde.

Crosses adorn a makeshift memorial for the shooting victims at Robb Elementary School in Uvalde, Texas, on May 26, 2022.

While police responded to the school within four minutes, authorities waited for an hour to enter the school, when a tactical team from the U.S. Border Patrol arrived and went in and killed Ramos, Texas Department of Public Safety (DPS) Regional Director Victor Escalon said.

Ramos had killed 19 children in the school, along with two teachers.

Castro, in his letter to Wray, referred to multiple reports that have said, “Onlookers allege that parents unsuccessfully urged law enforcement to enter the building during this time.” Some reports have said cops stopped parents from entering the school.

“I urge the FBI to use its maximum authority to thoroughly examine the timeline of events and the law
enforcement response and to produce a full, timely, and transparent report on your findings,” Castro wrote.

Previous articleLewis Hamilton unlikely to face sanction over wearing piercings at Monaco GP this weekend
Next articleHe Was an Up-and-Coming Leader. Then His University Accused Him of Threatening Violence.
- Advertisement -