Roughly 55% of Americans say they are ‘pro-choice,’ the most since 1995, Gallup finds 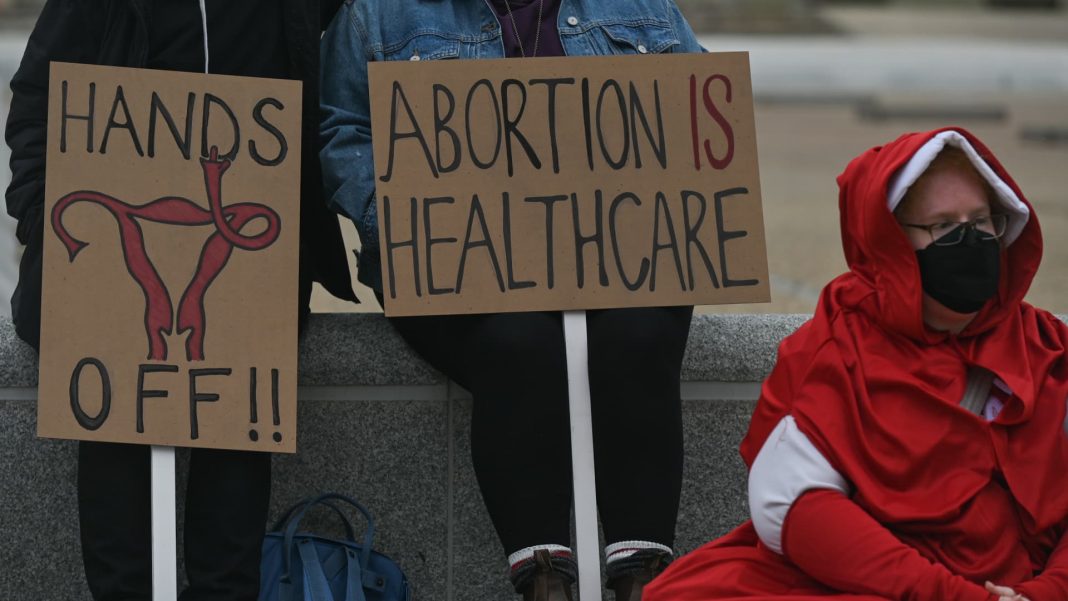 Activists hold Pro-Choice posters. Local pro-Choice activists gathered at the Alberta Legislature in solidarity with US women to protest in defense of abortion rights. On Sunday, May 8, 2022, in Edmonton, Alberta, Canada.

The percentage of Americans who identify themselves as “pro-choice” hit 55% — its highest level in decades — on the heels of a leaked opinion that strongly suggests the Supreme Court will revoke the constitutional right to abortion in the next month, a new Gallup poll finds.

That is six percentage points higher than the level of Americans identifying as “pro-choice” recorded in a similar Gallup poll last year.

The latest time that level was reached was in 1995 when 56% of Americans said they were “pro-choice,” or supported women’s rights to terminate their pregnancies.

Gallup said that the sharp rise in respondents who back abortion rights was driven overwhelmingly by the increase in Democratic-leaning groups of people with that view.

“The percentage ‘pro-choice’ did not change significantly among Republicans, independents, men or older Americans,” according to a summary of the findings issued by Gallup.

The poll released Thursday also found that a majority of Americans now consider abortion to be morally acceptable, the first time a majority has expressed that view in Gallup polling.

The same new poll found that the percentage of Americans who said they are “pro-life,” or opposed to abortions, is 39% — the lowest level since 1996.

And 35% of Americans say they favor making abortion legal in any circumstances, which is the highest percentage ever measured by Gallop.

The telephone survey of 1,007 American adults was conducted from May 2 through May 22. It had a margin of sampling error of 4 percentage points.

Politico reported May 2 that Supreme Court Justice Samuel Alito had written a draft of a majority opinion that said the high court’s 1973 ruling in the landmark abortion rights case known as Roe v. Wade “must be overruled.” Roe v. Wade is the bedrock of the constitutional right to abortion for Americans.

Alito’s opinion has not been formally released by the Supreme Court, nor has any other similar opinion that would undo the right to abortion.

But the court is widely expected to issue such a ruling by early July, which would for the first time in a half-century give states free rein in determining how to regulate abortion.

Demonstrators during an abortion-rights protest outside a courthouse in Los Angeles, California, U.S., on Tuesday, May 3, 2022.

More than half of U.S. states are expected to ban the procedure or much more severely restrict access to abortion if Roe is overturned.

Gallup’s new poll found that the percentage of Americans who are opposed to overturning Roe v. Wade held steady at 58%, and the level of those who want it overturned was 35%.

“These sentiments are essentially unchanged since 2019,” Gallup noted in a write-up of the results.

Gallup noted that a second question had been added to the survey in May for the first time, asking people their opinion on allowing each state to set their own abortion policies in the event that Roe was overturned.

Sixty-three percent of respondents said that would be a “bad thing,” the survey found. Another 32% said it would be a “good thing.”