Ruben Neves’ Wolves form: Bruno Lage explains the midfielder’s role and what he can do to take the next step 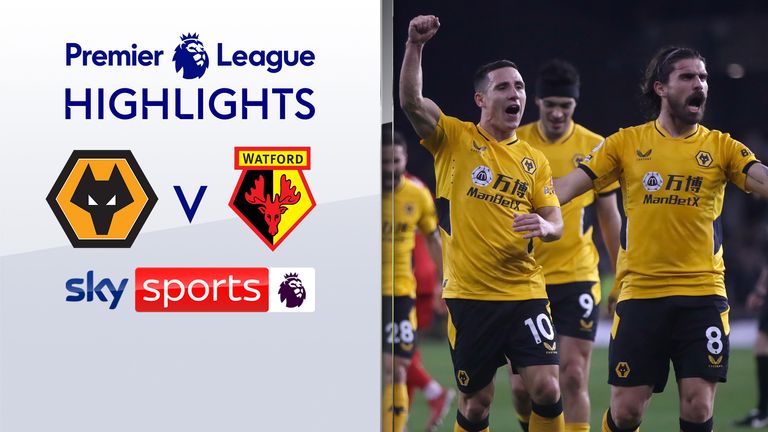 
Bruno Lage’s first memory of Ruben Neves at Wolves is not a fond one.

It was a bad day for us,” the Wolves manager tells Sky Sports. Lage was the assistant manager of Sheffield Wednesday. Neves was Wolves’ match winner that day, just before Christmas in 2017.

“There was a free-kick. He shot from outside the box and they won 1-0.” It was the second goal of a Wolves career now spanning more than 200 games. “I think he has been one of the main players at Wolves since they started this project with Nuno.”

That is certainly true. There is no player more obviously tied to the club’s renaissance than Neves. He is not the longest-serving player, as Conor Coady and Romain Saiss were signed before him, while others such as Raul Jimenez and Joao Moutinho have become fan favourites since.

FREE TO WATCH: Highlights from Wolves’ win over Watford in the Premier League

But it was Neves who joined in the summer that everything changed at Molineux.

He was Wolves’ player of the season when they won the 2017/18 Championship, scoring a goal against Derby that must rate as one of the best that the famous old stadium has ever seen. He also scored the club’s first goal on their return to the Premier League.

Under Lage, he has improved even more.

He provided a reminder of his talents in Wolves’ dominant 4-0 win over Watford on Thursday. The game was already won when he received the ball from Chiquinho’s cushioned header, but what followed next lit up the Wolverhampton night.

After taking a touch to manoeuvre into space, he spotted just enough of a window beyond Ben Foster to dink the ball delicately over the goalkeeper’s head and back down in time to find the net. It was yet another magnificent Molineux goal to add to his extraordinary collection.

On the eve of his 25th birthday, Neves is a player in his prime.

“Since November, he is doing very well. He has put his game at another level,” Lage said.

“He has put our game to another level. I am very happy with him. He is young but he has a good personality. He looks older on the pitch with his personality and knows what he wants for his career.”

What happens next in that career could be fascinating.

By the end of this season, Eddie Stuart, the South African who won the league title three times with Wolves in the 1950s, will be the only player from outside the British Isles to have played more times for the club. But how much longer can Wolves hope to keep him?

Neves deserves to be playing European football. Despite their recent wobble, there is still a chance that Wolves can deliver that. Finishing seventh would bring qualification for the Europa Conference League, as long as the FA Cup winners finish above them in the table.

But even that might not be enough to keep Neves at Molineux for a sixth season, as he has a host of admirers at home and abroad. There is no Premier League midfield in which he would look out of place. He is imposing himself on games more regularly now.

A subtle change to Wolves’ build-up play under Lage has helped facilitate that. Previously, Neves would often drop very deep, assuming that quarterback role at times, collecting the ball off the defence where there was more room for him to play.

He has been encouraged to do it less. Conor Coady can distribute the ball from deep, while Max Kilman is an impressive ball-carrier. Romain Saiss picks out clever forward passes. Willy Boly looked comfortable on his return. “That kind of thing is the little detail that we put in our games,” says Lage.

“It is not better or worse than the previous coaches but I think we give more space for the centre-backs like Saiss and Max to build up.” The result is that Neves is frequently picking up the ball in slightly more advanced areas of the pitch than he was doing before.

“We do not need the midfielder here, go away. Go to those different spaces, more in front. Give freedom for guys like Coady, Saiss and Max to find you. Organise the game over there. But here, it is the defenders’ space. Don’t come to the ball, the ball will come to you.

“After that, you can organise the game in the final third.”

Neves still showcases his full passing range. He has played by far the most successful long passes of any midfielder in the Premier League this season. He is one of only two players to bring up a century – Man City’s Rodri is the other – and Neves had made 162 of them.

But it is clear that he is operating in a different zone, inside the opposition’s half Those sweeping diagonal passes are still part of his game but he is joining the attacks much more.

Since the turn of the year, goals from distance against Brentford and Leicester have helped secure victories. He ranks top among midfielders for passes into the final third. An inventive assist unlocked the Brighton defence for the game’s only goal in December.

Only two midfielders have attempted more through balls than Neves this season. But just because the team’s setup allows him to have a greater impact further forwards does not mean that the defensive side of his game is lacking. The fact he has picked up nine bookings hints at that.

When Neves arrived in England, some might have been concerned that this elegant young passer, only a couple of months beyond his teenage years, could struggle to adjust to the robust demands of the Championship. Instead, he embraced that challenge.

Five years on, he is a player forged in that division and now a product of the Premier League too. It shows in his game. Only two players have won possession in the middle of the pitch more than Neves. There have been 62 tackles and 33 interceptions so far.

Lage wants to see him continue to develop into this complete midfielder. “I think the challenge for Ruben is that,” says Lage.

“You can see the physicality that a No 6 has. I think Ruben needs to do both things. I used to say that every No 6 has that attitude of, ‘I’m here.’ That is why some people say he is a defensive midfielder. For me, he is a central midfielder.

Neves is working hard to do that. He has covered more ground than any Wolves player in four of their last five matches, making more tackles and more interceptions than his team-mates in that period too. With his ability, that makes him a very dangerous player.

“If he does what the other players do in the defensive game, he has the extra quality to do the other parts when you have the ball and to organise the game,” adds Lage.

“That is the challenge for him to make the next step.”

Lage believes Neves should reach ‘the top of the top’. The conundrum for Wolves is that as he continues his journey there, it risks becoming more and more and more likely that this next step will also take him away from Molineux. He is that good.