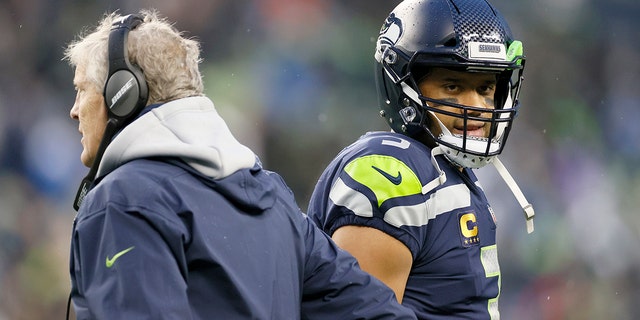 The Seattle Seahawks agreed to trade Super Bowl-winning quarterback Russell Wilson to the Denver Broncos on Tuesday and followed that up by releasing All-Pro linebacker Bobby Wagner, further proving that the franchise is rebuilding heading into next year.

Head coach Pete Carroll and Russell Wilson #3 of the Seattle Seahawks interact on the sidelines during the second half against the Detroit Lions at Lumen Field on Jan. 2, 2022 in Seattle, Washington.
(Steph Chambers/Getty Images)

A day after the Seahawks parted ways with their franchise quarterback, reports broke that many of Wilson’s now-former teammates felt like he “checked out” during the 2021 NFL season.

The Athletic reported that it was one of the many issues that led to Wilson’s departure. They described it as “a divorce in which both sides contributed to the dissolution.”

Russell Wilson #3 of the Seattle Seahawks looks on before the game against the Jacksonville Jaguars at Lumen Field on Oct. 31, 2021 in Seattle, Washington.
(Abbie Parr/Getty Images)

“Wilson felt the team’s personnel misses and devotion to [head coach Pete] Carroll’s old-school offensive philosophy were holding him back and damaging his legacy,” the report stated. “Carroll wasn’t going to abandon the formula Wilson and the Seahawks had used to claim the only Super Bowl championship in franchise history. It was only a matter of time before this marriage ended.”

END OF AN ERA IN SEATTLE WITH RUSSELL WILSON, BOBBY WAGNER GONE — BUT IS A SURPRISE ON THE WAY?

Even if Wilson’s teammates felt like he checked out, there’s no argument that the nine-time Pro Bowler performed at a high level. He completed 64.8%t of his passes for 3,113 yards with 25 touchdowns and only six interceptions in 14 games played.

Wilson dealt with a finger injury in mid-November that forced him to miss three games.

The Seahawks will receive two first-round picks, two second-round picks and a fifth-round pick, according to ESPN. The Broncos are also reportedly receiving a fourth-round pick.