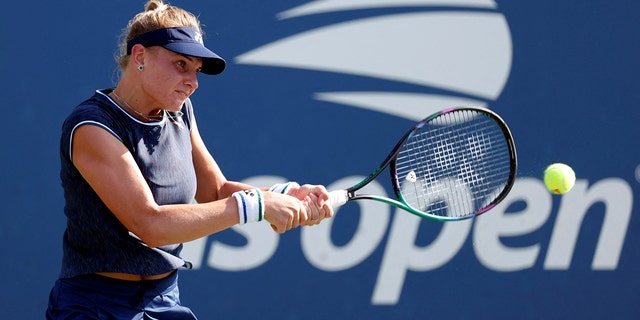 Ukrainian tennis player Dayana Yastremska revealed last week she escaped Russia’s invasion of her country as bombs were dropping. Days later, she is playing in the semifinals of the Lyon Open in France, searching for her fourth career singles title.

Yastremska entered the French tournament as a wild card and with a heavy heart as Russia’s invasion of Ukraine escalated. Somehow, she managed to defeat Belgian Ana Bogdan in a come-from-behind victory in the round of 32. She beat Bogdan 3-6, 7-6 (9-7), 7-6 (9-7) to advance to the next round.

In the round of 16, Yastremska picked up a straight-set victory against qualifier Cristina Bucșa 6-2, 6-3 to reach the quarterfinal round and her toughest opponent yet.

Dayana Yastremska of Ukraine in action against Angelique Kerber of Germany in a first round match on day one of the 2021 U.S. Open tennis tournament at USTA Billie King National Tennis Center.
(Jerry Lai/USA TODAY Sports/File Photo)

Jasmine Paolini was the No. 5 seed in the event with more than 270 wins as a singles player. However, Yastremska again showed no fear and upset Paolini 6-4, 7-6 (7-3).

On Saturday, Yastremska will face her biggest on-court challenge of the last two weeks, a matchup with second-seeded Sorana Cîrstea of Romania. Cîrstea is a veteran player who entered the tournament with more than 470 wins and two career titles. She’s ranked No. 31 in the world.

“I feel so much support from everybody,” Yastremska said after Friday’s victory. “Maybe in a tough moment I can hear and especially feel how people are supporting me here, and that’s another win for Ukraine.”

The 21-year-old is now one win away from another title match, but it was her home country that was on her mind as she played.

On Feb. 23, Yastremska recalled to Brut, she started hearing bombs near Odesa, Ukraine, during the night.

“On the 23rd of the night, I woke up because of the bombs.” Yastremska said. “I went to my father and asked what was going on, and he said, ‘The war has started.’ On the 24th, late at night, my father made a decision that next morning, early, me, my sister, my mother, we’re gonna leave by car to Romania. [I] was like ‘No, I’m not going leave the country. I want to stay home with you and mother. I don’t want to leave.’ That was my first reaction.

“We (drove) around maybe three hours. I was so scared to drive because you never know, may the bomb would be somewhere there or may you meet someone on the road or maybe tanks. I don’t know. It was super scary.

Yastremska said they traveled to Izmail near the Romanian border and took a boat to get across the river to Romania.

“I was so emotional because you can see your parents on the other side of the river, and you go to the safe place and your parents are staying there (in Ukraine).

“It was super sad because when we said bye to each other with parents, father said you girls need to leave, you need to follow your dreams, you need to build your future, and you need to take care of each other. … It’s very painful. I will never ever in my life wish to someone to feel how it is to say bye to your family in the war.”

Two women hold posters during a demonstration outside the embassy of France in Lisbon in solidarity with the Ukrainian people, Friday, March 4, 2022. Demonstrations were organized outside a number of embassies Friday.
(AP Photo/Armando Franca)

Yastremska initially posted that she was going to stay with her family and believed “peace will be restored.” But the next day she revealed she was leaving the country with her sister.

“After spending two nights in the underground parking, my parents made a decision at any cost to send me and my little sister out of Ukraine! Mom, Dad ,we love you very much, take care of yourself!!! I love you my country! Ukrainians take care of your lives,” she wrote on Instagram.

She admitted it was difficult to focus on tennis with the ongoing war.

“It’s hard to be on the court when all thoughts about Ukraine, and family,” she wrote.

But when she got on the court, she kept winning and is one victory away from her first final appearance since 2020.

She will face Cîrstea Saturday morning.