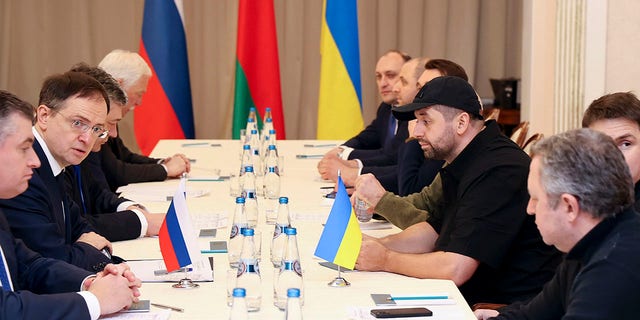 Several Russian state-controlled or state-aligned websites appeared to have been hacked early Monday.

The websites for the major Russian state-owned news agency, TASS, the Russian nationally distributed newspaper, Kommersant, and the daily broadsheet newspaper, Izvestia, which was founded in St. Petersburg during the Russian Revolution and was one of principal media outlets in the Soviet Union, all displayed a message signed purportedly by the notorious hacking collective Anonymous.

“Dear citizens. we call on you to stop this madness,” the message began.  “don’t send your sons and husbands to sure death. Putin is making us lie and puts us in danger.  We have been isolated from the world, no one is buying our oil & gas. In a few year’s time we’ll be living like in North Korea.  Why do we need this? For Putin to make it to history books? This is not our war, let’s stop it!”

It continued, “This message will be deleted and some of us will be fired and maybe put to jail. But we can’t tolerate this anymore. Russian journalists who care. Anonymous.”

The message comes several days after Anonymous, an international hacking collective that has carried out cyberattacks against governments and corporations, appeared to declare war against Russia and its president, Vladimir Putin, in response to Russia’s invasion of Ukraine.

The “YourAnonNews” Twitter account, which currently touts 7.4 million followers, made the declaration on Thursday, saying the hacking group is “currently involved in operations against the Russian Federation.” The account did not post about the Russian state news agencies as of Monday morning.

The European Central Bank warned on Monday that the European arm of Sberbank, considered Russian’s biggest lender, and two other subsidiaries were set to fail, after “significant deposit outflows” linked to “geopolitical tensions,” Reuters reported.

Ukraine’s second-largest city of Kharkiv was bombarded with a heavy rocket attack Monday. Local media reported dozens of people were killed and hundreds were injured in the city in northeast Ukraine with an estimated population of 1.5 million people. The heavy shelling and causalities come as Ukrainian and Russian officials met at Ukraine’s border with Belarus for peace talks.

On the fifth day since Russia invaded, Ukrainian President Volodymyr Zelenskyy early Monday again called on Ukraine to be urgently admitted into the European Union through a new special procedure.

“We are thankful to our partners for standing with us, but our goal is to be together with all of Europeans,” Zelenskyy said, according to an English translation. “Europeans realize that our soldiers are fighting for our country and, therefore, for the whole Europe, for peace, for peace for all, all of the countries of EU, for kids’ lives, for equality, for democracy.”

The Security Council gave a green light Sunday for the first emergency session of the General Assembly in decades. It will give all U.N. members an opportunity to speak about the war Monday and vote on a resolution later in the week that U.S. Ambassador Linda Thomas-Greenfield said would “hold Russia to account for its indefensible actions and for its violations of the U.N. Charter.”

French Ambassador Nicolas De Riviere announced that the Security Council will hold a meeting Monday afternoon on the humanitarian impact of Russia’s invasion, a session sought by French President Emmanuel Macron to ensure the delivery of aid to growing numbers of those in need in Ukraine.

Both meetings follow Russia’s veto Friday of a Security Council resolution demanding that Moscow immediately stop its attack on Ukraine and withdraw all troops. The vote was 11-1, with China, India and the United Arab Emirates abstaining.

Fox News’ Amy Kellog and The Associated Press contributed to this report.

Previous articleNYC resident stuck in Ukraine as war with Russia rages: We are ‘losing hope’
Next articleDan Hoffman: Putin threatening nuclear option because he’s ‘running out of cards to play’
- Advertisement -