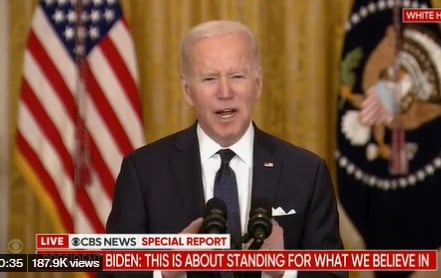 
The Democrat House led by Speaker Pelosi is planning on including $10 billion in the appropriations bill this Saturday.  Why would anyone question where this money is really going?

Democratic Party leadership will include $10 billion in “humanitarian, military and economic” aid to Ukraine in its next appropriations bill, Speaker of the House Nancy Pelosi said Sunday.

The government funding bill signed by President Joe Biden in February expires Friday, March 11, giving Congress just four days to come to an agreement on another appropriations package. Lawmakers have only agreed to a series of short-term resolutions since Biden took office, wrangling on various government programs, including federal COVID-19 vaccine mandates and an expansion of the Internal Revenue Service’s authority over privately-held bank accounts.

“The United States remains ironclad in our commitment to the Ukrainian people and in unity with our allies,” Pelosi said in a statement. “American troops will not go to war in Ukraine — but our nation can provide military equipment and support our allies who are supplying airplanes to Ukraine.”

The problem here is that the Washington DC politicians forget that we know that they all made millions in Ukraine before.  We’ve reported on this many times.  In the article below we discussed the connections in Ukraine with Pelosi’s son.  Who is another that doesn’t speak Ukrainian.

Speaker Pelosi’s son, Paul Pelosi Jr., got paid thousands for a no-show job which he wasn’t qualified in an effort to buy influence with his politician parent.  (The same company that paid him is connected to the Clintons as well.)

Nancy Pelosi’s son Paul was also on the board of an energy company and he traveled to Ukraine for his work.

AND — Better Yet — Speaker Nancy Pelosi even appeared in the company’s video ad!  According to Patrick Howley at National File Speaker Pelosi’s son Paul Jr. was an executive at Viscoil.

BOOM: Nancy Pelosi’s son Paul Pelosi Jr. (who went to Ukraine in 2017) was a board member of Viscoil and executive at its related company NRGLab, which DID ENERGY Business in UKRAINE!

And Nancy Pelosi appeared in a promotional video for the company!https://t.co/wlndLhPqLe

Shortly after his mother Nancy Pelosi became the first woman speaker, Paul Pelosi Jr., was hired by InfoUSA for $180,000 a year as its vice president for Strategic Planning in 2007.  This firm is also connected to the Clintons.

REMINDER: Joe Biden, John Kerry, Mitt Romney, The Clintons, Nancy Pelosi and George Soros All Have Connections to the Ukraine

And of course, everybody knows the Bidens made money in Ukraine.

If Americans believe that the $10 billion will make it to Ukraine, they really aren’t in touch with what is going on.