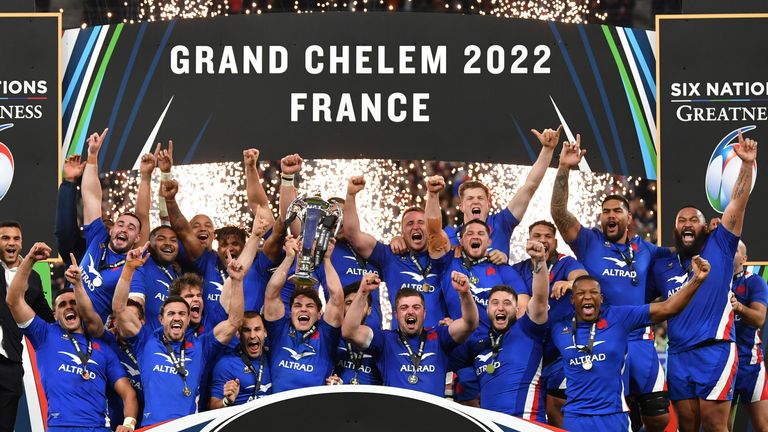 
Tries from Gael Fickou, Francois Cros and Antoine Dupont, plus 10 points from the boot of Melvyn Jaminet secured the Grand Slam as France claimed the Six Nations title for the first time in 12 years

France claimed their first Six Nations title for 12 years and secured the Grand Slam with a 25-13 victory over England in Paris on Saturday evening.

Tries from Gael Fickou and Francois Cros, plus two penalties and a conversion from Melvyn Jaminet put Les Bleus in prime position with an 18-6 lead at half-time, with Marcus Smith responding for the visitors by kicking two penalties.

Freddie Steward, moved from full-back to the wing to accommodate George Furbank, ensured a fired-up England capitalised on a strong start to the second half with a 48th-minute converted try.

But the effervescent Antoine Dupont hit back with a converted score to give France a 12-point lead heading into the final quarter and despite England’s valiant efforts, it proved enough to end a decade-plus wait for another Six Nations triumph.

Story of the game

France began the night knowing nothing less than a win would do if they were to secure the title for the first time since 2010 thanks to Ireland’s bonus-point win at home to Scotland earlier in the day, while the best England could do was finish third.

The approach from Eddie Jones’ men to try to unlock the Shaun Edwards-coached French defence was evident from the opening minutes, with fly-half Smith mixing up his kicks and prop Ellis Genge taking carries from deep into contact whenever the hosts kicked long.

Some ferocious tackling and excellent work at the breakdown from France won some crucial early turnovers in their own half though, quickly turning that into dangerous-looking counter-attacks which could have seen them lead in the opening stages by more than Jaminet’s ninth-minute penalty had it not been for handing errors.

France welcomed winger Damian Penaud back into the starting XV in place of the injured Yoram Moefana after he missed the previous week’s win over Wales due to testing positive for Covid-19.

England made five changes to their starting line-up following the defeat to Ireland, with George Furbank starting at full-back, Ben Youngs returning at scrum-half, Will Stuart in at prop, Nick Isiekwe coming into the second row and Sam Underhill making a long-awaited return in the back row.

But when the opening try did come on the quarter-hour mark, it was from a trademark scintillating attack which built the backs and forwards working in unison and was finished when Romain Ntamack flung a pass wide to the right which bounced and was gathered by Fickou for the outside centre to finish.

That score went unconverted by Jaminet, but Smith made no mistake four minutes later with his first opportunity with the boot after Uini Atonio had infringed at the breakdown, nailing the penalty from 42 metres out.

France’s full-back responded in the 23rd minute to punish an error from his opposite number Furbank, who conceded a line-out by picking the ball up with one foot in touch, by slotting over his second penalty.

Smith’s second long-range effort kept England within touching distance as they gained ground with a flowing attack which showed what they could do when they got quick ball from the ruck, but although Jaminet missed one from inside his own half France were able to add to their tally on the stroke of half time.

It came from another flowing attacking move after Gabin Villiere released Anthony Jelonch for the back row to charge into the England 22, and although Genge came up with a superb tackle to halt Ntamack on his own line, Cros was there to somehow reach through a wall of defenders to place the ball on the try-line followed by Jaminet adding the extras.

It was all England soon after the restart as France knocked on from the kick-off and although the chance immediately following that after the visitors opted to go for touch from a penalty in kickable range did not yield results, it was not long before they did cross the try-line.

Joe Marchant’s burst through a gap in the defence following a line-out in France’s half took England to within striking distance and the ball was quickly moved out to the right for first-half replacement Elliot Daly – on for the injured Jack Nowell – to send Steward over for a try converted from out wide by Smith.

England were now in the ascendancy, but a turnover penalty when on the attack again seemed to take the wind out of their sails a bit and Dupont swung the match back in France’s favour on the hour by taking an offload from Gregory Alldritt as the hosts surged forward and ghosting through the defence to finish for another converted try.

The away side were not done though and went close again, with replacement Alex Dombrandt being held up thanks to some superb last-gasp defending and Villiere keeping his cool to recover a well-placed grubber from Smith with Steward bearing down on him.

Ultimately though, there would be no denying Fabien Gathie’s side the glory their performances throughout this year’s championship merited, while England edged out another of their old rivals in Scotland on points difference for a third-place finish.

18 – Antoine Dupont has been directly involved in 18 tries in 15 home games for France since the beginning of 2019, scoring 8 and assisting 10. Magnifique. pic.twitter.com/dAHpZpSMeM

“Twelve years is a very long time and it’s been a very intense final game, but we got the reward. I think we were very lucky to have a fantastic group of players.

“Fair play to England, they tried to break our defence, but I think the team spirit and tactics won us the game. I would recommend our players to keep their feet on the ground because it’s a major step for this team tonight and there is more to come – I think we can still improve our game.”

“It’s pretty disappointing, to be honest. We certainly had them in fitness, we felt like they were getting tired and just failed to capitalise, essentially. That’s on us, we’ve got a lot to learn, but I’m proud of the boys’ efforts.

“We’d have loved to have come out here and got the win. I really thought we were going to do it at a few stages in the game, but we didn’t capitalise well enough.”

Attention now turns to the summer tours for the international teams, which see France head to Japan for a two-Test series in July.

England return to action against the Barbarians at Twickenham on June 19, followed by departing for a three-Test series in Australia.