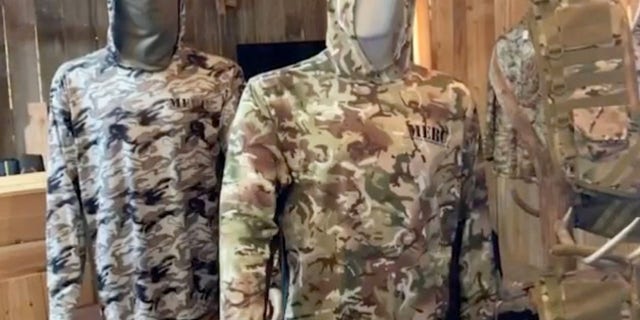 When it comes to helping Ukrainians as a result of Russia’s attack on Ukraine, many people across the United States are pitching in however they can.

Veteran Eric Mercado of Texas recently appeared on “Fox & Friends” to discuss his unique fundraising efforts for the people of Ukraine.

Since that Fox appearance, he says the donations and phone calls have been “pouring in.”

“I’m currently looking for more manufacturers and have reached out to two other companies now that I can afford to have much more camouflage [made],” he told Fox News Digital.

“I’m now looking to manufacture ghillie suits for snipers, [as well as] camouflage jackets to add to the list of my camo hoodies.”

Shown here, some of Eric Mercado’s camouflage for the people of Ukraine as they aim to fight off Russian forces.
(Eric Mercado)

Mercado served in the military for 27 years. The Austin-based entrepreneur now owns his own hunting and fishing clothing company called Merc Performance Wear.

When Russia invaded Ukraine, Mercado decided to help out the Ukrainians the best way that he could: by sending over 30 camouflage hoodies created by his company.

Since then, he decided to design gear specially for the Ukrainians.

Others have been inspired by his work.

“I’ve also talked with a few people wanting to help me collect camouflage clothing that people can donate to drop-off spots,” he explained. “One will be located in Buda, Texas, right outside of Austin, and at my shop at the Fredericksburg trade days.”

Mercado also said that while some people have asked if they can purchase some of the gear for themselves, he’s focusing on sending supplies to the Ukrainians for now.

“I’m telling everyone not now,” he said. “To me, for every one American who gets one of these, one less Ukrainian will get one!”

Pictured here is one of Eric Mercado’s designs that is being manufactured and donated to the people of Ukraine.
(Eric Mercado)

He also said that he’s being very careful with how he responds to some of the offers coming his way.

“I have two phone calls to make after work to see how others can help,” he said.

“Someone from either Madison Square Garden or Time Square, New York City, reached out to me to see if I was marketing in that area. I do have to be careful with those,” he told Fox News Digital. “I don’t want to use the donation money for that. All donations will go to manufacturing and shipping.”