THE BACKDROP OF DIOR’S SPRING/SUMMER 2022 HAUTE COUTURE RUNWAY CELEBRATED THE LINK BETWEEN FASHION, ART AND CRAFTS 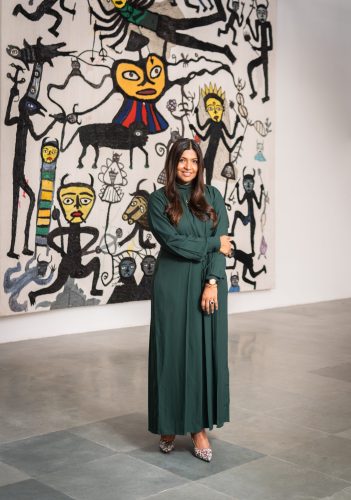 The stage had been set for Dior’s SS22 haute couture show at the Musée Rodin in Paris on the 24th of last month, but the space more closely resembled the setting of an art exhibit. Was it a fashion show? Was it an art gallery? There’s no correct answer – at least not according to Dior’s creative director Maria Grazia Chiuri. Either way, it looked like a definitive dialogue between the worlds of fine art and craft was in the offing.

The luxury maison put artisanal talent on the front foot (as it should) and, to that end, entrusted Mumbai’s Chanakya School of Craft to create its intricate set design. The result was a series of breathtaking embroidered tapestries draped across the walls, which reinterpreted the eclectic work of Indian artists Manu and Madhvi Parekh.

Established in 2017 by Karishma Swali and Monica Shah (who also co-founded the bridal label Jade; the parent company, Chanakya International, an export brand that works with internationally renowned luxury fashion brands, has been in the business for close to four decades), the non-profit school of craft is dedicated to the preservation of traditional craftsmanship and the communities responsible for pioneering it. The seeds of this objective were initially sowed in 1986, and some of the artisans have been at the institution since its inception, reveals Swali.

Chanakya International’s synergetic relationship with Dior goes back to the nineties and is deliberately devoid of the hype and theatrics that today’s high-profile fashion collabs or “hacks” often thrive on. This long-standing creative association between Chanakya and Dior cannot possibly be summed up by an Instagram-friendly hashtag or simply reduced to Chanakya X Dior. The SS22 couture show held in January is a testament to their no-frills unification that ultimately boils down to one goal – uplifting artisans and craftspeople around the world by giving them the platform and resources they need and rightfully deserve.

Excerpts from an interview with Karishma Swali, who heads Chanakya School of Craft…

Tell us a little bit about the process of creating the set for Dior’s SS22 haute couture show and the initial brief received from Chiuri?

Manu and Madhvi Parekh’s work drew Maria Grazia’s attention from the get-go, and we quickly realised our collective vision of wanting to build on their art’s magnetic energy to create an all-immersive experience that celebrates culture and overcomes the implied division between art and craft while exploring the shared language between the two.

Developing new techniques is a very instinctive process, so we went about the interpretations in a very spontaneous way – allowing the vivid lines and forms of the artists’ work to lead the way. At Chanakya, we followed a multidisciplinary craft approach to hand-embroider the installations, which formed part of the set design, with small-needle zardozi techniques using shaded silk threads, organic linen jute and cotton threads. Additionally, the installations feature exquisite needle-weaving techniques in which layers of raw jute threads are spread, finely combed and then woven with small needlepoint stitches to create depth and texture.

Why did you choose Manu and Madhvi Parekh for this particular collaboration and what was it like working with the duo on a project of this scale?
The seeds of this collaboration were probably sown many years ago when I first began to collect the artworks of Madhvi and Manu Parekh – two artists I admire greatly. What followed was a long series of conversations and we realised that we share a deep appreciation for our cultural and craft legacies. Joining hands on a series of artistic installations where I interpret their paintings through handcraft was a natural progression; we took care to ensure that neither medium’s essence was compromised as we wanted each party to celebrate their individual exploration through a shared artistic language.

As I began to know Madhvi and Manu better, I was surprised to learn that the latter had spent more than 20 years working with embroidery at grassroots levels with traditional craft pockets across India. This made our dialogues regarding techniques and colour interpretation all the more effortless.

How long did it take to create this set and what were some of the challenges faced that may not seem apparent when gazing at the flawless finished piece?

We have been working on these collective creations for almost a year. This exceptional installation showcased at Dior was created by 320 master artisans who worked for more than three months, embroidering 340 square metres (approximately 3,600 square feet) of tapestries entirely by hand. Our biggest challenge was to work on blurring the pre-established divide between fine art and craft and instead celebrate the eternal love story between these two disciplines. Through the confluence of contemporary artistry, couture techniques and textile excellence in this dynamic presentation, we resuscitated the role of the atelier, of the artist, and of the couturier – something that sounds easier said than done.

Was it difficult to reinterpret Manu and Madhvi’s paintings in the form of embroidered installations? How did you ensure nothing was lost in translation?

When a vision is fuelled with passion, every challenge is a beautiful opportunity. One of the most interesting aspects of this immersive experience was to alter the scale of the original artwork into monumental craft, while maintaining balance, proportion and depth with utmost precision.

The idea behind altering the original scale of Madhvi and Manu’s works into a monumental size was to allow viewers to become part of an experiential setting that celebrates the interconnectedness between art and craft.

To interpret Madhvi’s art, a primitivist expression was created using dimensional techniques in repetition to form background textures that evoke a magical world of folktales and the pastoral idyll, populated by village deities, forests, animals, children and amorphous forms. Meanwhile, we had to be meticulous about the finer details that comes with creating multiple layers while interpreting Manu’s impressive portfolio; each time anyone sees the final piece, they are guaranteed to find a novel detail that will allow for individual explorations.

Which are some of your favourite tapestries from the set design and what’s the story behind them?

It is difficult to have a favourite when each one has been created with equal love and devotion. However, I was very drawn to the tapestry inspired by Madhvi’s World of Kali, which celebrates Shakti, the quintessential embodiment of feminine energy and fertility. To represent this energy through tactile craft, we chose techniques such as couching, traditional Indian fine-needle zardozi stitches to create a sfumato effect – a technique of allowing tones and colours to shade gradually into one another, producing softened outlines or hazy forms. I also loved the series based on Manu Chant painting – it was a rewarding experience to create the vibration and energy of a chant through the tangible medium of raw threads.

How does one achieve a set design that enhances a couture show and tells a story without distracting from the clothes? How did you strike that perfect balance when conceptualising the tapestries for Dior’s SS22 show?
The singular unifying thread between the couture collection and the artistic installations that formed the set design was the celebration of artisanal excellence. Otherwise, the women’s couture collection was not connected to the backdrops at all as they both relied on two separate narratives.

Before becoming a world-renowned couturier, Christian Dior was an art gallerist. Maria Grazia Chiuri is perpetuating and celebrating this part of his legacy by treating the haute couture show space as an exhibition that celebrates the world of art, culture and craft excellence. Today, we are all experiencing a paradigm shift in creativity; marrying art, tradition and fashion through a shared vision of craftsmanship fortifies a narrative that transcends pre-established barriers. I am truly honoured and humbled to be able to represent our country’s incredible artisanal legacy and to share with the world the powerhouses that are India’s artisans.

India’s artisanal craftsmanship has been abused by international luxury giants for decades. However, collaborations like these where our artisans’ talent and technical prowess are being globally acknowledged feels somewhat like the light at the end of the tunnel. Why do you think it’s taken this long for the recognition to come about?

India thrives on handcrafted details – the diversity is staggering, both in variety and skill. While it is true that luxury giants have not always been transparent in their acknowledgment of India’s artisanal history and craftsmanship, it is also true that their patronage has contributed to its preservation.

It is important for us, as a country, to come together and stand up for our values, culture, and artisanal history. The Chanakya School of Craft was founded in 2017 with the same goal: to preserve our cultural craft heritage through innovation and education. At the school, we provide a space for the master craft artisans to hone their incredible talent and work actively with them to contribute to design innovation to preserve our craft heritage. Our common goal as citizens of the world should be to preserve, promote and disseminate all forms of art and culture.

Does The Allure Of Fashion Weeks Belie Their Inherent Anachronisms In A Post-Consumerist Society Driven By Conscious Consumption Patterns And Inclusivity?