The Essay That Prompted an Editorial Revolt 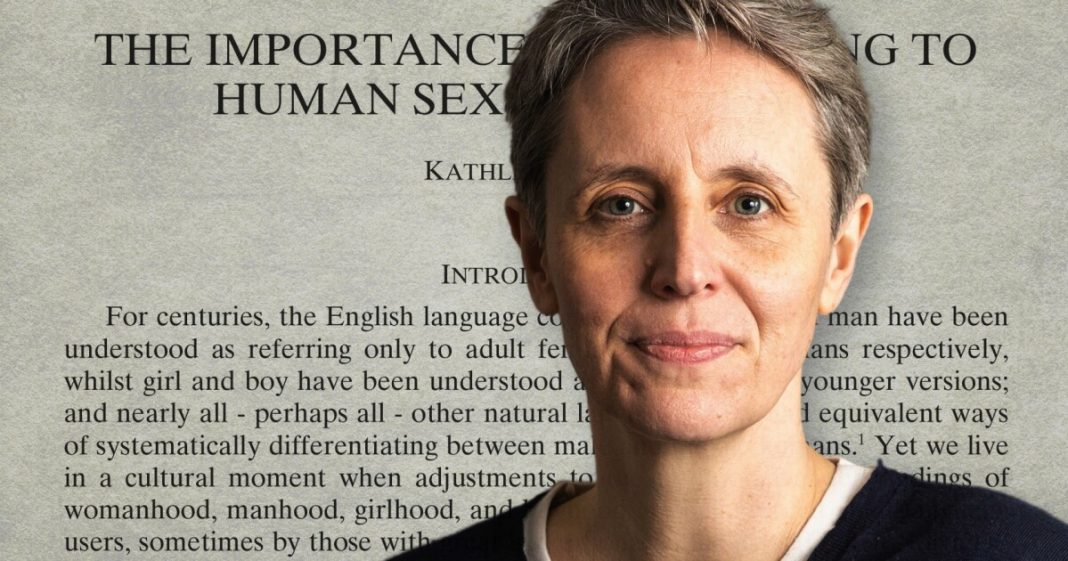 
Kathleen Stock’s essay in the latest issue of Law and Contemporary Problems was controversial before she even wrote it. Last summer eight student editors resigned from the journal, which is published by Duke University’s law school, rather than be associated with the essay. The remaining student editors elected not to work on the issue in protest, and they voiced their objections in a note appended to the journal’s masthead. The proposed topic, along with Stock’s reputation, was enough to prompt a staff revolt.

The essay, titled “The Importance of Referring to Human Sex in Language,” is part of the journal’s “Sex in Law” special issue, which is dedicated to the “high-stakes, highly polarized” debate surrounding how sex is defined by courts and legislatures. In it, Stock, who until last fall was a professor of philosophy at the University of Sussex, in England, argues against what she calls “sex-denialism.” The core of her case is the following: “Though it is normally polite and desirable to observe the preferred descriptors and pronouns of trans people in interpersonal contexts, there are times when literal and accurate reference to actual sex is important.” Among the times she cites: medical settings, sports teams, and prisons. Stock insists that “the concept woman does vital cognitive work that simply could not be done were the concept changed to refer to gender identity or social role.”

It’s hard to imagine a more opportune — or a more fraught — cultural moment for a conversation about sex and the law. State legislatures around the country are considering, or have passed, bills related to transgender participation in sports or to medical procedures for transgender youth. Meanwhile, Lia Thomas, a transgender woman on the women’s swim team at the University of Pennsylvania, has sparked a national debate about fairness and inclusion, and has placed the NCAA’s shifting policies under intense scrutiny.

Dylan Jarrett believes Stock’s argument is wrong, poorly argued, and dangerous. Jarrett, a third-year law student at Duke, resigned as editor in chief of the journal last June because of Stock’s proposed essay (according to the note on the journal’s masthead, students do not select articles for special issues, though they are normally involved in editing and producing issues). In her resignation letter to the faculty editorial board, Jarrett predicted that the essay would be a “direct attack on transgender people and their identities.” Now that she’s read what Stock wrote, Jarrett says her fears have been confirmed. “I think it’s really clear that this is not scholarship — it’s transphobia,” she says. “It’s a bad article. It’s badly written. It’s badly argued. It’s embarrassing that Duke would publish something like this.”

Jarrett’s take was echoed by Duke OutLaw, an LGBTQ+ student group, which condemned the essay in an open letter. The letter also questioned the quality of the essay, saying it was “hardly a meaningful contribution to academic discourse.” Among the 21-page essay’s shortcomings, according to the letter, was the “mere 70 footnotes.” Duke OutLaw condemned Stock’s essay for causing “unnecessary harm” and denounced the law school for providing a “platform for this harmful scholarship.”

Stock has been the subjects of protests before, including close to home. She resigned from the University of Sussex last fall after some students there objected to her continued employment, hoisting banners with messages like “Stock Out” and “No Terfs on our Turf” (the acronym TERF stands for trans-exclusionary radical feminist and is generally considered derogatory). Stock has said she left her position after the police suggested that she would need bodyguards on campus and advised her to install security cameras at her home. “This has been an absolutely horrible time for me and my family,” she tweeted last October. “I’m putting it behind me now.”

In an email, Stock responded to the Duke OutLaw letter, writing that it “manifests the usual clichés beloved of people who wish to strike moralised poses in public without the effort of providing academic arguments.” She went on to say that the letter offers “unspecified claims about harm done by my conclusions” and encouraged those bothered by her essay to write a detailed rebuttal. Stock added, “I appreciate that this won’t give them quite the buzz of self-aggrandisement they are apparently after, though.”

Lee Garza took Stock’s essay personally. Garza, who is director of recruiting for Duke OutLaw and identifies as nonbinary and a transgender masculine person, started taking testosterone injections last week, he said, in part prompted by his frustration over the essay’s publication and the need he felt to speak out against it publicly. “You always want to be able to go on your identity journey on your own time without having to feel like you have to come out in order to be heard,” said Garza. “But it’s also nice to have a little bit of a push in my process.”

Garza and Jarrett placed blame on Doriane Coleman, a law professor at Duke and the chair of the journal’s editorial board. She was the special editor, along with Kimberly Krawiec, a law professor at the University of Virginia, of the “Sex in Law” issue in which Stock’s essay appears. Coleman, a former competitive track athlete, has become known for her scholarship on sex and sports. In a 2017 essay, published in Law and Contemporary Problems, Coleman wrote that if competitive sports are divided based on gender identity rather than biological sex, “female athletes would almost always lose to males and both sport and society would lose many of the practical and expressive benefits that inure from including and celebrating females in competitive sport.”

Jarrett doesn’t believe that Stock’s essay would have appeared in the issue if Coleman hadn’t been one of the special editors. She considers Coleman’s views on transgender women’s participation in sports discriminatory and isn’t comfortable with Coleman being on the Duke faculty. “I hate that part of my tuition money has gone to pay her salary,” says Jarrett, who has avoided Coleman’s classes. For his part, Garza thinks Coleman’s work is “at its core transphobic.” He also doesn’t believe any testosterone-suppression requirement should be in place in order for transgender women to compete, and that testing testosterone levels is itself transphobic.

In an email, Coleman said she was reluctant to respond to the criticisms from students directed at her or Stock. “I don’t want to get into a fight with anyone about this,” she wrote. “Suffice it to say that I disagree with her characterization of the work, which reflects my view that transgender women are who they say they are and should be treated in life and in law with the same care and respect as everyone else.” Last year Coleman co-founded, along with the former tennis great Martina Navratilova, among others, the Women’s Sports Policy Working Group, whose mission is to find middle ground in the debate over the participation of transgender women in sports.

Student editors were also upset that the faculty editorial board declined to institute style rules for writing about gender issues. In a draft of a proposed editorial style guide, the editors suggested replacing the term “biological female” with “assigned female at birth,” while the term “female genitalia” would instead become “vagina and vulva.” It’s worth noting that various versions of the phrase “assigned at birth” are used throughout the “Sex in Law” issue, including in an essay by Joanna Harper, a transgender woman who writes about gender variance in sports performance, and by Anthony Michael Kreis, whose essay focuses on how “sex stereotyping that stresses binary gender roles and forms of expression acutely harms both women and LGBTQ people.”

The backlash to Stock’s essay wasn’t unexpected. Or, at least, Stock clearly expected it. In her recent book, Material Girls: Why Reality Matters for Feminism, she writes about the “huge struggle” of getting views like hers into academic journals, and how they tend to be met with moral disapproval and accusations of transphobia. “In this suffocating context, I definitely count as a heretic,” Stock writes in the book, which was published last year before she resigned from Sussex. “And that suits me fine.”

Previous articleNovak Djokovic added to Indian Wells draw, though organisers unclear if he can enter US
Next articleLove Is Blind Season 3 Is Closer Than You Think – E! Online
- Advertisement -

‘There’s So Many Questions’: Sports-Realignment Shocker Could Mean a Sea Change for Higher Ed