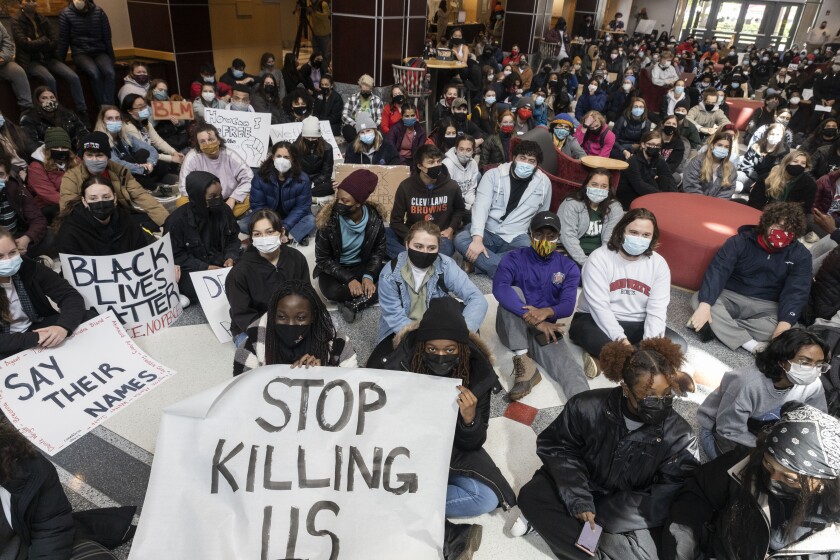 The signs, located near the flagship campus, in Columbus, are the work of a group of Ohio State University parents that is trying to shine a spotlight on what they see as the university’s failure to curtail off-campus crime. The group, Buckeyes for a Safe Ohio State, started after a 23-year-old student, Chase Meola, was shot and killed at an off-campus residence in 2020.

The organization is calling on the university to add lighting and cameras, send more-frequent crime notifications, and increase police patrols. Although the university has made improvements in those areas recently, group leaders say it has not done enough.

At the same time, though, Ohio State is facing pressures to cut the police presence on campus. Last spring, on the same day that a Minneapolis jury found Derek Chauvin guilty of murdering George Floyd, a Columbus police officer shot and killed a 16-year-old Black girl, Ma’Khia Bryant. Hundreds of Ohio State students participated in a sit-in in the student union the next day and called on their university to end its relationship with the city police.

That didn’t happen. In August the Ohio State administration, informed by a task force, announced measures to combat off-campus crime, including more lighting, cameras, and police officers. Shortly thereafter, the university’s president, Kristina M. Johnson, announced a $20-million initiative to improve safety on and near the campus over the next decade.

From Temple University to the University of Michigan at Ann Arbor, parents’ groups are calling on colleges to increase public-safety measures on and off campus, as violent crime spikes nationwide. At the same time, the institutions face a tide of complaints from students, faculty members, and others on campus about unjust policing and racial discrimination. In this divided climate, colleges are working to preserve their stakeholders’ trust, knowing their enrollment, reputation, and relationships hang in the balance.

In March the parents of some Temple University students banded together to hire private security to patrol the Philadelphia neighborhoods where their children lived. According to The Temple News, some parents felt as if the university was not doing enough to protect students.

The Temple parents were spurred by the November death of Samuel Collington, a 21-year-old Temple senior who was shot outside his apartment during an attempted robbery.

On March 23, Temple announced new safety measures to protect students living off campus. Those included providing grants to landlords with student tenants to install lighting and cameras, and allowing students living off campus to move on campus for the rest of the semester. After Collington’s death, Temple vowed to increase its police force by 50 percent; it’s on track to reach that goal by the end of the year.

We are definitely leaning more towards the parents, and we are doing things that probably a lot of student groups aren’t truly in favor of.

A partnership with the Philadelphia police has allowed Temple to increase patrol hours to combat higher crime in off-campus areas where students live.

But just as at Ohio State, not everyone was keen on the idea of more police officers at Temple.

Progressive activists expressed concerns about racial profiling of Black students and local residents. Some argued that Temple should do a better job of addressing what they called the root causes of crime, including poverty and housing displacement. The university has long had a fraught relationship with the majority-Black neighborhood that surrounds it in North Philadelphia.

Charles H.F. Davis III, an assistant professor in the University of Michigan’s Center for the Study of Higher and Postsecondary Education, said that the parents’ groups advocating for more police officers tend to promote the voices of white parents.

“What white parents are partially saying … is, ‘You need to protect our students, which is us, from them, which is the community in which this institution resides,’” Davis explained. “[As] opposed to saying anything about how the institution’s relationship with that community creates the conditions and the climate for which gun violence is made possible.”

Temple, for its part, has tried to improve its relationship with the surrounding area through the Good Neighbor Initiative, which provides students with guidance about how to conduct themselves responsibly in nearby neighborhoods, and hosts events to engage students and community members.

The parents’ groups have sprouted as many cities experience higher rates of violent crime since the pandemic began amid a nationwide racial reckoning, in 2020. Like their kids, parents are increasingly connected online, with much of the organizing happening in private Facebook groups and on other social-media platforms.

While the groups themselves may be new, parents have been organizing around student health and safety issues for years. Parents are behind dozens of organizations devoted to the prevention and awareness of hazing, drug and alcohol abuse, sexual assault, and suicide.

The Clery Act, which requires colleges that receive federal funding to make information about crime on and near campus publicly available, was, in part, a product of parental activism.

“Let’s face it, I think college has become the new high school from that perspective,” Kaiser said. “In high school, parents were famously called helicopter parents. And that’s kind of translated over to college. It’s hard for that separation.”

Of course, students are also worried about their personal safety. But many are reimagining what that looks like and, in the process, branching out from their parents’ ideas. The murder of George Floyd and the police killings of other Black people have prompted some to shift their attitudes toward the campus police.

The belief that the police shouldn’t have a place on campus has grown in popularity, and grass-roots movements to reform or abolish campus police departments have taken off.

In May 2020, after the murder of George Floyd, the University of Minnesota-Twin Cities restricted its ties with the Minneapolis Police Department. And in the fall of 2021, Portland State University disarmed its campus patrols.

Pranav Jani, an associate professor of English at Ohio State, collected faculty signatures for the initial petition demanding that Ohio State cut ties with the Columbus Police Department, in the summer of 2020. He said he was surprised at how many Ohio State professors were willing to put their names on the letter.

“It was a sign of how much of a shift had happened in the country between the first phase of Black Lives Matter, in 2014, and then this one, in 2020, where many more people were willing to listen and at least affiliate themselves in some way publicly with the movement or its causes,” Jani said.

Still, the campus-safety expert S. Daniel Carter said he had not seen any institution make a “radical shift” in its campus-police protocol since 2020. Colleges are navigating the controversy over the campus police, he said, “by maintaining the status quo.”

As students, employees, and parents push their institutions to adopt their particular idea of safety, college administrators find themselves on the hot seat, with every decision heavily scrutinized and blown up in the news media, from the editorial pages of the student newspaper to Twitter accounts that tag university leadership.

Inevitably, administrators must make decisions that frustrate or anger parts of the campus community.

“We are definitely leaning more towards the parents, and we are doing things that probably a lot of student groups aren’t truly in favor of,” Temple’s Kaiser said. “We’ve increased our partnership with the Philadelphia police from 96 patrol hours a week to just about 300. Clearly not something that a lot of the students are in favor of.”

When the administration has to announce a controversial decision or tell someone no, Kaiser said, it helps to explain the rationale, correct misinformation, and listen to the opinions of those who don’t agree.

Though some students and employees oppose policing, Kaiser said, Temple must respond to safety concerns on and off campus, and that means working with the police. The university tries to explain that to the opponents, he said, but it understands it can’t make everyone happy.

Temple and other institutions must balance those safety concerns against parents’ expectations. For example, some parents concerned about crime wanted the university to provide a shuttle from its Center City campus to its main campus, in North Philadelphia. But, Kaiser said, a city subway and a regional train already covered that route.

“You don’t want to just say to the parent, ‘No, we can’t do it,’ but ‘We can’t do it, but here are some really viable options for your kids to take to get back and forth in a really safe way,’” Kaiser said.

Moreover, institutions like Temple can do only so much to limit off-campus crime, said Steven J. Healy, a co-founder and chief executive of the campus-safety consulting firm Margolis Healy.

Healy said colleges should take advantage of existing methods of communication — blogs, newsletters, liaison officers — to speak with parents. As for students, institutions need to explain their initiatives to show they’re practicing fair policing, he said.

“It’s important for folks to understand the limitations of what institutions can do in terms of providing the levels of security,” Healy said. “We can’t make everything absolutely 100 percent safe. Institutions have taken a lot of steps to do that, but they’re also doing it in this backdrop of calls to eliminate a police presence in a lot of areas.”

‘How Is That Helpful to Anyone?’

In March, Ohio State rolled out a new feature for sharing information on off-campus crime with people on campus — a “community crime map” with statistics from the Columbus Police Department. The map can be configured to show particular crime categories and data going years back. Users can also sign up to receive crime alerts via email.

Open the map, and the pre-programmed settings will show you that from March 13 to April 12 there were three robberies of individuals, five burglaries of residences, and four aggravated assaults within a mile of campus.

The map replaced the university’s emailed “neighborhood safety notices.” Officials touted how they had fulfilled students’ requests to present crime information in a visual format.

Leaders of Buckeyes for a Safe Ohio State were not so enthusiastic. One parent, Allyson Reid, said the crime map was putting the onus on students to find information. “How is that helpful to anyone?” she asked.

Monica Moll, Ohio State’s director of public safety, said that while it does take an extra step to receive the alerts, it is easy enough for parents to sign up their students for the alerts using their university email addresses.

The controversy over the map — a measure that is intended to provide more information and, therefore, a greater sense of security — reflects how unpredictable reactions to new safety protocols can be. It is not possible for campus-safety officials to know with 100-percent certainty who will like their choices and who will be disgusted by them.

Previous articleNick Jonas and Priyanka Chopra’s Baby Name Revealed – E! Online
Next articleKamala Harris Sounds Like She is Speaking to a Class of Kindergarteners in Speech at Vandenberg Space Force Base (VIDEO)
- Advertisement -