“The Position of Party Office is that of Queer Anarchism”: A Conversation with artist-curator Vidisha-Fadescha 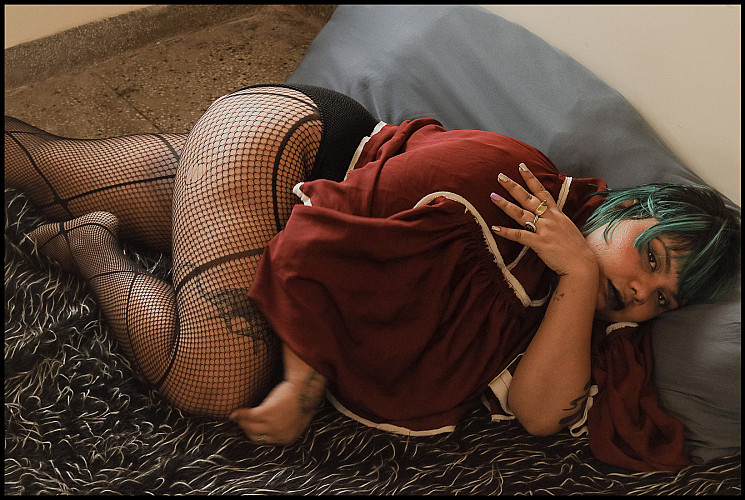 The “party” in Party Office seems like a subversion of the term’s traditional use, but it also offers an expansive way of looking at it by acknowledging that the bodies that exist in clubs, in public spaces, are inherently political because of how they are perceived. Could you tell me how you arrived at this name?
One of the ideas behind the practice of Party Office is that the gathering is a site where people can engage with each other without a formal commitment to something. The way the neoliberal system judges what is “partying” is to think of it as this wasteful thing where you are doing nothing, but I think that “nothing” is actually a space where you are not participating in the capitalistic system. When you are failing, that is when you are challenging the capitalistic system. I am interested in that failure.

On the 2019 election result day, I threw a party called ‘Mangone’ because, right before that election, the PM had done an interview with Akshay Kumar about eating mangoes. People wanted to sleep through the day after it became evident that morning that BJP was going to win, but then many did show up for the party because such collective grieving is very important so that you remember you are not alone. This collectivity is anti-systemic, as any system tries to isolate you and make you cynical.

So, after Modi was re-elected, I started working on nightlife because academic spaces build these theories and critiques, but when it comes to practise, they don’t invest in it. At a club, you have at least three events a week. We would speak to and train the bartenders and security, including about how to make infrastructural changes for a hospitable space for trans people; for instance, “you cannot touch people” or “you cannot use their dead names”. There is no police because we are anti-policing; they criminalise us by rendering us a menace. Here, we help people consume drugs and alcohol safely, have sex safely, and I think that’s what a party should be.

I have had experiences where I felt safe, felt seen and accepted. We know what pleasure is because our pleasure is not necessarily found or represented. Parties become important to transpeople as a site where we can be our full selves; nightlife is also where one finds employment. It is primarily either the entertainment or sex work industries that employ people who are queer or trans. So, I am creating my own space, where we are familiar with each other’s vigilances, and/or respect boundaries.

“Party Office opens at a moment where, as a generation, we don’t relate or have any associations with our present political parties.” This is from your manifesto. Many academics say that people born after the ’90s are likely to have a consumerist mindset instead of a political one, and that is especially true if you are upper caste and upper class and likely benefitted from the privatisation policy. How do you reason with or explain this feeling of disconnect that is ubiquitous amongst younger leftists in the social space you have created?
I don’t actually believe in a “left” in India. Firstly, what is claimed as such is communism, and that was appropriated by upper-caste brahmins. And second, the form of communication that communism took was academic writing, which automatically means that communists are not supporting the Bahujans — the large majority. So, I don’t know what we call leftists here because a lot of this language of “liberal, left, centrist and right” comes from American politics, where people still understand what that is. India has not had large national parties for a long time. The BJP came up in the ’80s and was not considered a big party when it did. It is only after numerous Congress corruption scandals that it consolidated the power it has now.

What I see more are liberals who think, “I will go and give a flower to the police and that is going to work in my favour”. I want to tell them, “You are a fucking idiot because you have not read the manifesto of the police”. It says that “police are formed to protect the state”. If the state wants to harm you, then the police are going to harm you. My position is not at all that of a leftist, I am an anarchist, and the position of Party Office is also that of queer anarchism. I don’t think what the state gives me suffices what I need to live.

So, at the Party Office, one of the primary things is that people only speak from a life lived. We are not representing anything, and I am not representing anyone. Even in terms of the publications we are producing, if someone has written a text, I find somebody from the same community they come from to edit or translate it because language has its own dialects as well. We are currently publishing a bilingual book in Marathi and English: Towards a Dalit Structure of Archiving; which has essays by people who were organisers of the Elgar Parishad. The translator and editor, Coral, is familiar with the same Marathi which has been used and so doesn’t colonise the authors’ writings.

Your expressions of dissent have to co-exist with the expressions of the upper-caste artists who also use familial and social connections to establish their legitimacy in the art space. How do you navigate that?
I have had the privilege of education, but even within the education space, although I have been invited by Ambedkar University, NID [National Institute of Design] and several others as a “guest lecturer”, they have never employed me because my caste is not supposed to be employed in that position. The art world is a privileged place, a very “meri beti ka artwork laga do” [display my daughter’s artwork] kind of space. And the artists who are able to survive are usually upper-caste people, who have their networks within the fields of the work they are doing, both in India and internationally. I don’t want that kind of dependence, and, in fact, don’t have that kind of dependence either.

How I got to where I am is thanks to a lucky draw. When the Panchayat system was set up in the villages in India, the first elections happened through chit-picking. My grandfather and a brahmin person applied for it, and my grandfather’s name was picked in the draw, and he was made the sarpanch of our village. And then my father was the first person among the community to get into civil services, which was a highly regarded profession. So if it wasn’t for the lucky draw, or the commitment of my parents to always provide for us more than they have ever received, and push us to always learn and always work to support other people, I wouldn’t be here.

At the Party Office, I am inviting people who I want to grow old with. And in the last two years, Party Office has hosted a lot of people who have left their homes, and have needed a space they feel safer at than their homes. And that is what it is about — building a community that you can feel safe with, can align yourself with and cuddle with.

You have been invited as a Lumbung artist for the Documenta Fifteen exhibition in Germany. How do you see this in the context of what you have been doing so far at Party Office and the creative outlets you want to continue to engage with?
Documenta is a contemporary arts exhibition held every five years, and it has been a canon of artistic works that comment on and challenge the status quo. Unlike the commercial and white aestheticised practices you see at Biennales and art fairs. This edition focuses on collective voices coming from the Global South. Ruangrupa, the Indonesian collective who are curators of Documenta Fifteen, with their ramming ethos, have imagined something the Western art world is unable to articulate. The artists and collectives invited ask questions that pierce through the gaze of the white audiences. This year, the organising artist exchange and exhibition has been a large transcultural dialogue among 65 collectives and “collectives within collectives” who are invited.

Party Office is an art and a social space, which operates transnationally and at satellite locations. It comes together after several years of artistic and organising work. With Party Office, through “conceptual architectures” such as grants, publications, artist commissions and fellowships, our work focuses on foregrounding lived experiences. We are building new archives where authors are able to express their plural self and take agency on their narrative. This work is actively anti-caste, anti-racist and trans*feminist, and that is also because I have lived experiences of being outcasted within these patriarchal structures.

Some of the methodology we use may not be traditional subjects of enquiry; such as the site of a party, exclusive spaces for trans and BIPoC people, the practice of kink, as well as our work ethos where institutions are held accountable for their incompatible structures. Party Office is also unapologetically political — we are here to work — a work towards having peers and friends who we can share safe moments with, and who care for each other. [“safe moments” is a term my friend Kinkinella uses.]

I find this year’s Documenta to be meaningful in terms of connecting so many of us who might work together in future, those who share similar empathy or have similar inquiries. Those who seek a certain kind of collective futures. It is also a moment where many years of practice have come together to be shared at such a scale with several new audiences.

1. Since this interview, Party Office suspended their programmes at Kassel due to transphobic and xenophobic harassment, and lack of an adequate safety programme offered by Documenta. They have shifted the programme partly to Berlin, and partly online. They have asked for a formal apology from Documenta, who are yet to offer their comment upon the issue.

2. Taring Padi, an Indonesian artist collective, came under scrutiny at Documenta for their work ‘People’s Justice’, which contained images that were construed as being anti-Semitic. The group has put out a statement saying that the caricatures were not targeted towards a particular group, but were rather a visualisation of the structural militaristic violence that was propagated with abandon by governments, citing the Indonesian genocide of 1965 under General Suharto as an example.

The Context Of Indian Couture