These Professors Were Thinking About Quitting. So They Turned to Social Media. 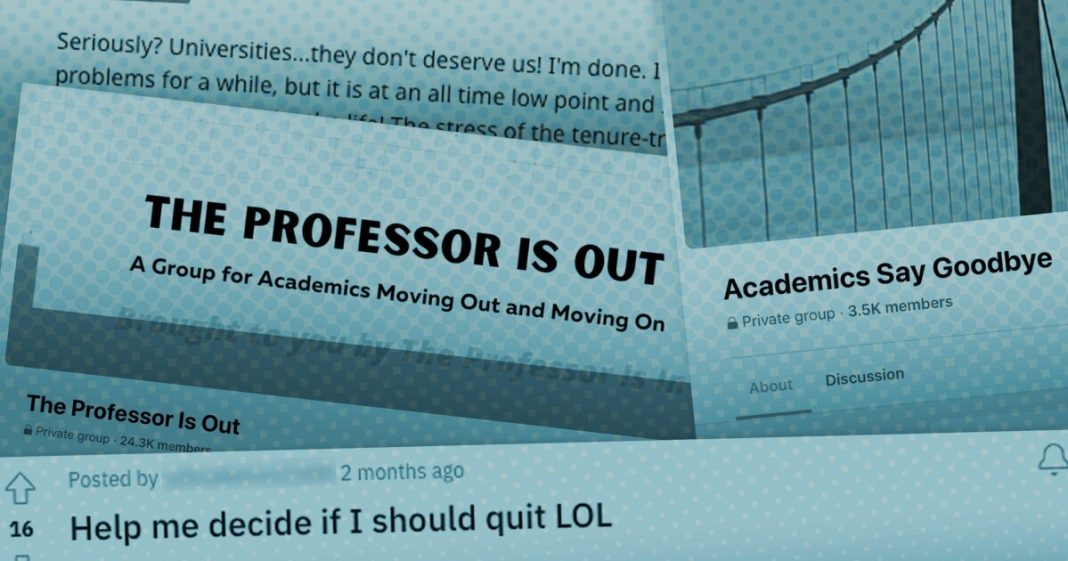 
For three and a half years, David Schwartz has taught geography at Northampton Community College, in Pennsylvania. That hadn’t been the plan, but it was the job that opened up to him after he earned his master’s degree.

Teaching during the pandemic left him unsure of whether his students were learning, until he got notes from them at the end of the semester. And when classes returned in person, the stresses of the work didn’t go away.

So, a few months ago, the adjunct professor found himself in a Facebook group for academics seeking advice on how to quit their jobs.

At colleges across the country, faculty members — from longtime tenured professors to adjuncts — are looking for a potential way out of academe. And often they are trying to find it through communities on social media.

The posts aren’t just “quit lit,” the first-person Twitter threads, blog posts, and other online media detailing why faculty members left their institution or academe. Instead, those community-focused social-media forums, most often on Facebook and Reddit, are filled with posts from people in limbo. “Who’s thinking of quitting?” one reads. “Help me decide if I should quit LOL,” says another.

Some posters, many of them anonymous, seek advice on whether they should leave their college for an industry job, or what profession would make the most sense for them to transition into. Others are recording their transition from higher education to an outside industry, writing comments and posts that offer advice to scholars who are still on their journey out.

Schwartz said his experience of teaching during the pandemic had left him “very much feeling I am highly underpaid for what I am doing.” When he spoke to his colleagues, he found many felt the same way. One pointed him to a Facebook group, “The Professor Is Out,” dedicated to academics who are quitting. It helped him realize that “it’s not impossible for me to shift out of this thing.”

The pandemic really exposed the cracks in the foundation and made people realize that this is not a healthy way to live.

The Chronicle spoke to several professors who had recently used Facebook groups or subreddits as they considered leaving higher education. Their stories are similar and increasingly common: As stressors piled up during the pandemic, they realized that even a tenured professorship wasn’t what they thought it was.

The professors felt underpaid and undervalued by their respective institutions. They were concerned about the future of higher ed due to enrollment and funding declines. And they felt the perks of the job — such as job security and academic freedom, which many said had been eroded — were no longer worth the stress.

Faculty members said they often drew a confused response when talking about leaving within their own social circles. Some friends asked why they would leave what was supposed to be a dream job. Others didn’t understand why it was so hard to leave. So the professors turned to social media to get the feedback they wanted.

‘Oh, This Is Possible’

For Kelcy Sagstetter, a former assistant professor of history at the U.S. Naval Academy who recently began working to attract new clients at Deloitte, joining “The Professor Is Out” on Facebook helped her realize she wasn’t alone in her disenchantment with higher education.

“There are other people going through, experiencing, feeling exactly what I am,” she said. “And then to see the success stories, I was like, ‘Oh, this is possible.’”

“The Professor Is Out” is among the Facebook groups formed recently to help academics seeking a career switch. Karen Kelsky, who herself left academe 12 years ago to become a career coach, created the page in 2020, a few months after the pandemic began. (Kelsky is an occasional Chronicle contributor.)

Over the decade she’s advised others on how to get a job as a professor, she’s seen a small but steady demand from scholars headed in the other direction — out of higher ed. But when Covid-19 hit, Kelsky said, demand surged from faculty members who wanted an off-ramp.

“Covid was the straw that broke the camel’s back” and led many academics to begin searching for a way out, she said. But the pandemic alone wasn’t the cause.

Kelsky cited a familiar litany of pressures encroaching on higher ed. “The cause,” she said, ”is defunding, exploitation, systems of overwork, loss of faculty governance, activist right-wing boards of trustees that are interfering, activist state legislatures that are interfering, the attacks on ‘critical race theory’ … people working 60 to 70 hours a week for inadequate compensation. That’s the cause.”

Sagstetter said she “had started to tentatively dip my toes” back into networking events, to make contacts in other industries and also beef up her LinkedIn presence, prior to Covid. “Then the pandemic happened,” she said.

It was isolating, she said, and exacerbated the problems Sagstetter already faced, both professionally and personally. She ultimately decided to leave. “It was such a hard decision” after having spent years working to become a professor, she said. “But once I made it, I realized it was the best one.”

The ‘Guardians of Academe’

Throughout her transition out of higher ed, Sagstetter posted in “The Professor Is Out” about her different stages of getting a new job. On June 25 she announced to the group that she had landed the gig at Deloitte. She thanked the group’s members for their help, and she offered her advice to others still making the transition: Hire a professional résumé coach, read Christopher L. Caterine’s book on leaving academe, and network with as many people as possible.

“The Professor Is Out” allows people to post anonymously, an important feature for academics who are still on the fence about quitting. When Kelsky created the group, she expected around 1,000 people to join. Now it has more than 24,000 members.

The Facebook groups aren’t equally helpful to everyone. Schwartz said he realized through the group that he could make the transition. But the advice he found seemed to cater mostly to faculty members with tenure or on the path to getting it, not adjuncts like himself, he said.

Another popular forum for maybe-quitters is the subreddit r/Professors, which has more than 100,000 members — dubbed “Guardians of Academe.”

As the subreddit’s “syllabus” puts it: “This community is a place for professors to BS with each other, share professional concerns, get advice and encouragement, vent (oh yes, especially that), and share memes.”

An associate professor at the University of Southern Mississippi wrote the post asking others to “Help me decide if I should quit LOL.”

The professor, who requested anonymity because she is still considering leaving her university, said in an interview that by the time she got tenure, she was “disenchanted” by the job. She wanted to pursue her research but found she spent more time teaching, advising, and filling service roles than she had expected. In recent months, someone at the U.S. Department of Defense approached her about an open research position that would enable the professor to do work related to her interests.

With the thought of leaving her university for a new career now in mind, she started in “The Professor Is Out” Facebook group, then found her way to Reddit.

“I thought that it would be helpful to get some, granted, pretty anonymous but still objective opinions” on potentially leaving. “And the main reason for that is that it’s hard for me to get what I feel like is good advice.”

She found that people in other professions often didn’t understand why it would be such a big deal to leave. Meanwhile, her colleagues in academe questioned why she would ever consider leaving. On social media, by contrast, she found people in a similar boat to hers.

A Calling and an Identity

Luna Muñoz, a former senior lecturer at Britain’s University of Liverpool and now a career coach and consultant, said social media had created a community, especially for academics of color. That’s true for academics breaking into the profession, she said, and also for those looking for a way out.

But leaving, Muñoz said, is no easy decision. One of the hardest parts for many academics is accepting that leaving higher ed does not make you a failure. For many, academe is a calling. The work, she said, “becomes intertwined with your identity.”

In her own journey as an academic woman of color, Muñoz said, she had lost sight of her values. Leaving, she said, was a way to realign her work with what she cared about: helping underrepresented scholars find a successful path. Now she helps others do the same.

Kelsky said a problem “for people leaving is that there are these two interlinking challenges: They need concrete advice on how to interview, how to write a résumé, how to do a LinkedIn page, and then they need moral support, community, compassion.” Social media, despite its many problems, can help people find the support they need, Kelsky said.

Sagstetter, the former Naval Academy professor, said she planned to stay in “The Professor Is Out” group to offer advice to others. Since she posted about her new job, she said she’s had several conversations with others about her journey and the advice she can share.

“The pandemic really exposed the cracks in the foundation [of higher education] and made people realize that this is not a healthy way to live,” she said. “And I think that that was a wake-up call, sort of across the entire industry, that there’s other options out there.”

Previous articleMedable, Withings partner to use connected devices in decentralized clinical trials
Next articleAn Overseas Ed-Tech Firm Wants to Buy 2U. What Could That Mean for Colleges?
- Advertisement -