This Historian Doesn’t Shy Away From Fights Online. Now He’s on the Defensive. 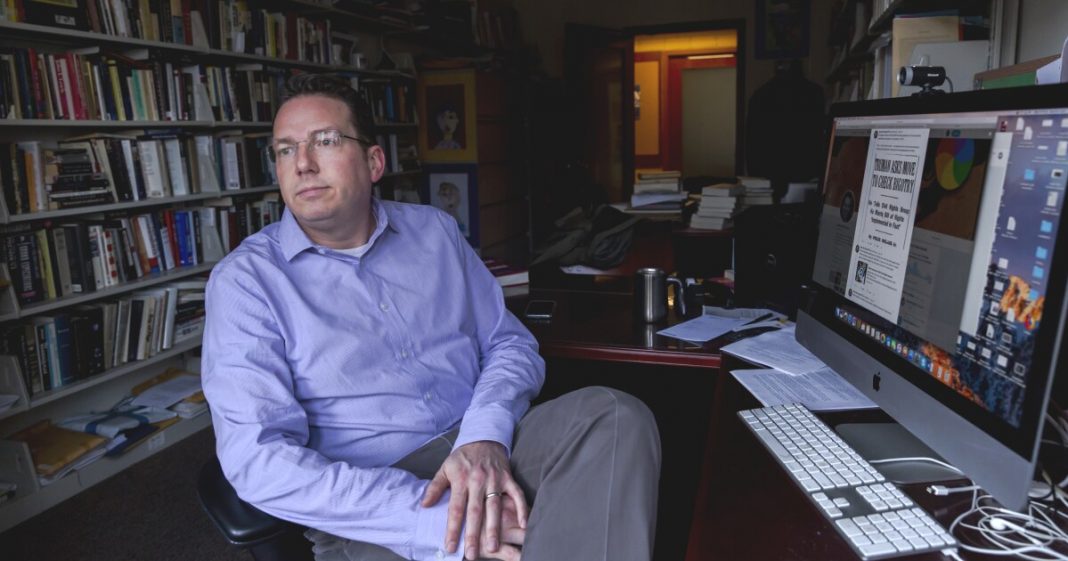 
Kevin Kruse made his name picking apart right-wing talking points on Twitter. Sure, he’s a historian at a prestigious university — Princeton — and he’s written some well-received books. But you probably know him because he likes to mix it up online, delivering bite-size history lessons to his more than half-a-million followers while skewering pundits and politicians for their confident ignorance.

And so it came as a surprise to see him accused of the most basic of scholarly sins: plagiarism. In a Reason article and a series of blog posts, Phillip W. Magness, an economic historian and senior research fellow at the American Institute for Economic Research, points to instances in which it appears Kruse lifted sentences almost word for word from two fellow historians. Magness asks whether Kruse “holds himself to the same standards that he imposes on his internet adversaries.”

Naturally those adversaries pounced. Sen. Ted Cruz, the Texas Republican whom Kruse has called creepy and unlikable, deemed the accusations “serious charges that merit a full investigation.” Dinesh D’Souza, whom Kruse has mocked for making “idiotic arguments” and for bragging about his Dartmouth degree, labeled him a “plagiarist and a thief.”

Others jumped in to defend him. One historian called Magness’s piece “bullshit” and a “hit job.” Another wrote that it was evidence that came from a “poisoned search.” In an essay posted on Medium, L.D. Burnett argued that Magness is a “bad-faith actor who is more interested in ruining Kruse’s reputation than in protecting the integrity of historical practice.”

Magness is not a Kruse fan. He wrote a negative review of Kruse’s book One Nation Under God: How Corporate American Invented Christian America, calling elements of it “misleading” and “haphazardly presented.” Magness is the author of a book-length critique of The New York Times‘s “1619 Project”; Kruse contributed an essay to that project. Kruse has called one of Magness’s criticisms of his book “silly,” and Magness at one point blocked Kruse on Twitter.

It seems unlikely that Magness would have downloaded Kruse’s dissertation from a database and carefully scoured it for missteps if Kruse wasn’t, as The Chronicle put it in a 2018 profile, “history’s attack dog.” And there’s also little chance that a sitting senator would publicly demand an investigation of a few sentences in a two-decade-old dissertation if the author wasn’t someone who had repeatedly nettled him.

But poisoned search or no, is what Magness found a problem? Or is this an attempt to gin up a scandal in order to poke holes in the reputation of an ideological opponent?

Kruse also takes a couple of sentences almost word for word from Thomas Sugrue’s 1996 book, The Origins of the Urban Crisis, which won the Bancroft Prize, one of the most distinguished awards in the discipline of history. Both of the passages taken from Bayor and Sugrue appear early in Kruse’s dissertation as he’s explaining what he believes his research adds to the field. There are no quotation marks or citations of the authors (though both are cited later in the dissertation). Bayor told me he doesn’t consider what Kruse did, at least with regard to the sentences from his book, plagiarism. “There are a few introductory sentences he used that are almost verbatim, and they’re not important in my book,” he said. “I attributed it to sloppy note-taking.” (I contacted Sugrue, a historian at New York University, but haven’t heard back.)

It might be sloppy note-taking, a momentary lapse by a scholar hastily putting the final touches on a dissertation that was years in the making. Those sentences were either excised or revised in Kruse’s 2005 book, White Flight: Atlanta and the Making of Modern Conservatism, which is based on his dissertation. And, as several defenders have noted, we’re talking about a few sentences in a heavily footnoted 600-page dissertation that draws on a wide array of primary and secondary sources.

Still, what Kruse did in those instances is, by almost any definition, plagiarism. And it is certainly plagiarism under Princeton’s guidelines, which specifically say that sloppiness is not an acceptable excuse. In an emailed statement, Michael Hotchkiss, a Princeton spokesperson, writes that the university is “committed to the highest ethical and scholarly standards” and that it’s “carefully reviewing the concerns that have been shared with the university, and will handle them in accordance with university policy.”

In a brief interview, Kruse declined to discuss the passages in question or to say what he thinks of Magness’s motivation, but he acknowledged failing to credit Bayor and Sugrue. “While I tried very hard in my dissertation to give full and proper acknowledgment to all my sources, I clearly fell short in those instances,” he told me. “I’ve spoken with Professor Bayor and Professor Sugrue, and I’m grateful to have such kind and generous intellectual mentors.”

For more than a week, Kruse has been uncharacteristically quiet on Twitter.