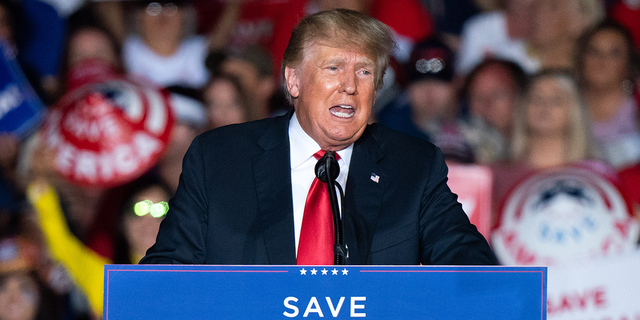 FIRST ON FOX: Former President Donald Trump is returning to the crucial battleground state of Georgia in two weeks, to hold a campaign-style rally.

Fox News has learned that the event will be held on Saturday, March 26, in Commerce, Georgia, northeast of Atlanta.

HE’S GOT TRUMP’S ENDORSEMENT, SO WHY IS DAVID PERDUE STRUGGLING AGAINST GOV. BRIAN KEMP?

Joining Trump at the rally will be former Sen. David Perdue, who is backed by the former president as he primary challenges Republican Gov. Brian Kemp. Perdue currently trails the conservative governor in the latest public opinion surveys – including a Fox News poll conducted March 2-6 and released on Tuesday that indicates Kemp leading Perdue by 11 points among Republicans likely to vote in the May primary – and in the fight for fundraising.

The trip by Trump will be his first to Georgia since Sept. 25, when he held a large rally in Perry, Georgia.

Four years ago, with the support of Trump, Kemp narrowly defeated Democrat Stacey Abrams to win the governorship. But Kemp earned Trump’s ire starting in late 2020, after he certified now President Biden’s narrow victory in Georgia in the presidential election, following two recounts of the vote. Trump, who had unsuccessfully urged the governor and other top Republican officials in the state to overturn the results, has repeatedly vowed to return to Georgia to campaign against Kemp. Trump for months urged Perdue to primary challenge the governor, and late last year he endorsed Perdue a day after the former senator launched his bid.

“I’m proud to have President Donald Trump’s endorsement and look forward to welcoming him back to Georgia to rally support for our campaign,” Perdue told Fox News.

PERDUE GOES TO CPAC TO MAKE CASE TO TRUMP VOTERS

Also scheduled to appear at the March 26 rally with Trump is former professional and college football star running back Herschel Walker, the clear front-runner in this year’s GOP Senate primary in Georgia. The Fox News poll indicated Walker at 66% support among likely Republican primary voters, with his rivals for the nomination all in the single digits.

Walker, who won a Heisman Trophy and helped propel the University of Georgia to a national championship four decades ago, was encouraged by Trump for months last year to run in the race to challenge Democratic freshman Sen. Raphael Warnock. And Walker was endorsed by the former president soon after jumping into the race in the late summer.

Georgia’s Senate race is one of a handful of contests in November’s midterms that could decide whether the Republicans win back the majority in the chamber.