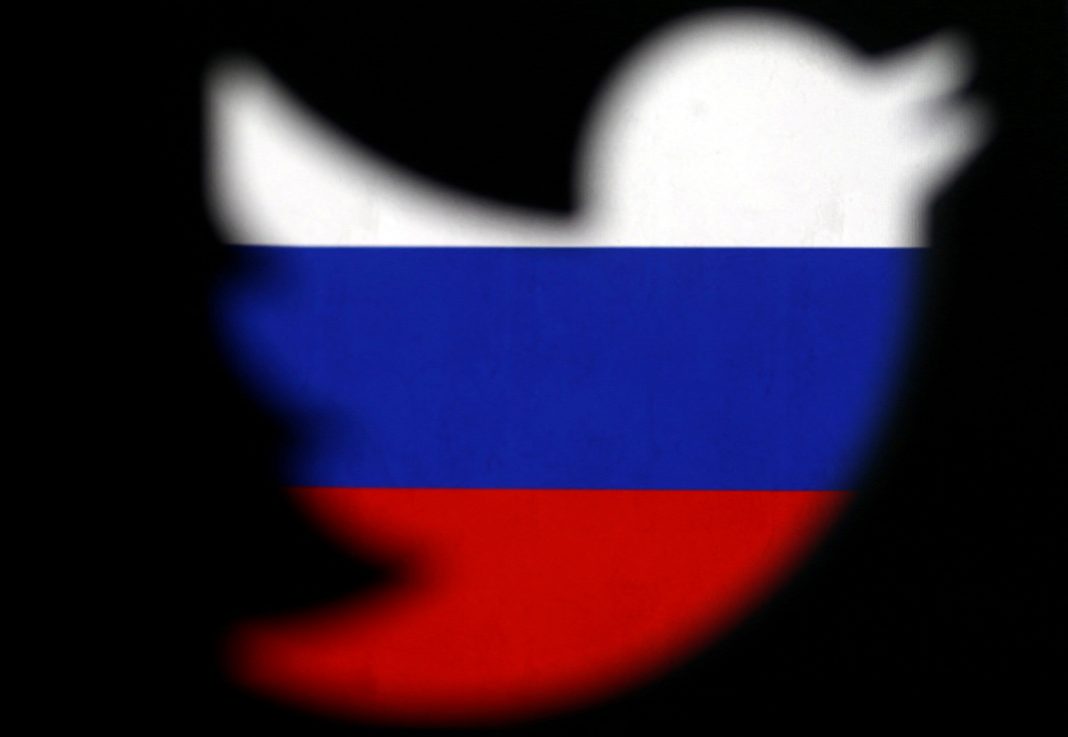 A 3D-printed Twitter logo displayed in front of Russian flag is seen in this illustration picture, October 27, 2017.

Twitter took down two tweets by Russia’s embassy in the United Kingdom on Thursday for what the social media giant called “the denial of violent events” during the ongoing Russian attack on Ukraine.

In one of those tweets, Russia’s embassy claimed that a pregnant woman seen in a photo of casualties at a children’s hospital in the besieged port city of Mariupol that was destroyed by a Russian airstrike Wednesday was actually a Ukraine “beauty blogger” and suggested that the photo was staged propaganda.

That tweet contained two separate photos of women the embassy claimed are the same person. Another tweet referencing the claim remained online Thursday after two of the other tweets were taken down by Twitter.

At least one child and two adults were killed at the hospital, and another 17 were injured, Ukraine officials have said. Ukrainian President Volodymyr Zelenskyy, in a tweet containing video showing damage at the hospital, wrote, “children are under the wreckage.”

A Twitter spokesperson told CNBC in an email, “We took enforcement action against the Tweets you referenced as they were in violation of the Twitter Rules, specifically our Hateful Conduct and Abusive Behavior policies related to the denial of violent events.”

CNBC has requested comment from the embassy, and from a spokesperson at Russia’s embassy in Washington.

The Russian Embassy in Geneva claimed in a tweet that remains online that the Mariupol hospital was attacked because it was being used as a headquarters by a Ukraine paramilitary group, which was firing on the Russian military while using “#HumanShields.” Russia’s U.K. embassy retweeted that post.

Earlier Thursday, the United Nations Office of the High Commissioner for Human Rights said Russia’s invasion has killed at least 549 civilians in Ukraine, of whom 41 were children.

An additional 957 civilians have been injured since the attack began two weeks ago, the office said, while noting that the actual casualty total is believed to be “considerably higher.”

“Most of the civilian casualties recorded were caused by the use of explosive weapons with a wide impact area, including shelling from heavy artillery and multilaunch rocket systems, and missile and airstrikes,” that office said.

Previous articleSerena Guthrie: England captain on retiring from netball, missing The Roses and representing mums
Next articleJUST IN – Biden Administration Readies to Extend Airline Mask Mandates For Another Month
- Advertisement -